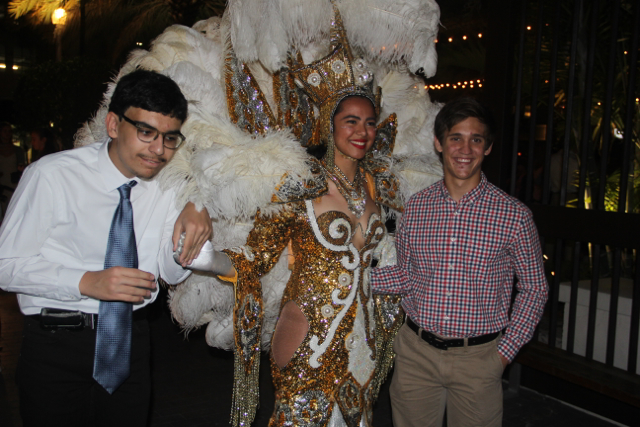 The annual Bridge for Peace fundraising event took place on Feb. 17 at the Coral Gables Museum.  The International Baccalaureate Honor Society (IBHS) hosts the event to raise money for a specific cause, with this year’s being the school’s very own Best Buddies club.  The event was able to raise around $14,000 in donations and ticket sales, surpassing its goal of $10,000.  The funds collected will go towards a room in the school designated the “Buddies Place.”  It will allow the buddies, children with disabilities, to have a safe space to go to when school becomes overwhelming.

“I think that what Best Buddies is doing through the Bridge For Peace fundraiser is amazing. I’m happy to see a place where Buddies can enjoy themselves, have lunch, have fun, and spend time with their peer mentors. I know that the impact will be deeply positive and will heighten the reach of the club and the awareness of special needs at our school,” sophomore Alfredo Wolfermann said.

As in the past, this year’s event featured international cuisine, with choices ranging from burritos from Chipotle to Spanish tortilla from Delicias de España to dessert items from Seasons 52.  Restaurants and students generously donated and collected a myriad of food items in order to diversify the dinner.  Another anticipated tradition held was the International Fashion Show, although this year, Buddies from the organization strutted down the runway alongside IBHS members in an inspiring show of solidarity.  Soon after the fashion show ended, the runway was turned into a dance floor as students and teachers alike began to leave it all out on the floor.  The function also featured a henna tattoo artist and street artists spray painting a sign for the room.

“I was really excited about this event. It was my third year going to Bridge for Peace but it was really special this time because it was for a cause right here at our own school. I felt like I was playing an important part even if it was just in attending” senior Gaby Vega said.

As any event coordinator knows, nothing is set in stone, and the IBHS board members faced this reality when faced with a last minute cancellation.  The band hired, Offshore Drift, was unable to perform, but as the cliché goes, the show went on.  Board members were able to pull off a magnificent event in the wake of a change of plans, enlisting a D.J. to run the music for the function instead.  The night was rife with joy as IBHS was once again able to host a spectacular event.