Clinton versus Trump: The Final Showdown 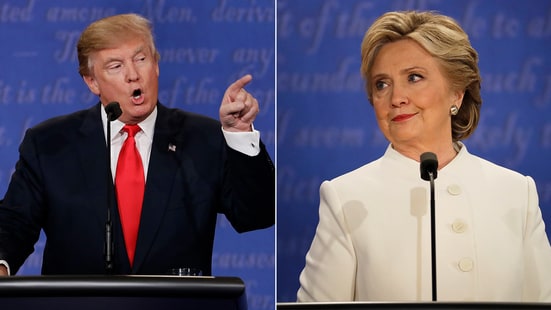 Clinton and Trump face off one final time before Nov. 8.

On Oct. 19, at the University of Nevada, Las Vegas, Hillary Clinton and Donald Trump faced off in the final grueling 90-minute presidential debate of the 2016 election.  In the short time that elapsed between the second and third debate, several women came forward publicly accusing Mr. Trump of sexual assault, to which he responded with comments about how the election is “rigged”.  The former Secretary of State, on the other hand, stayed relatively in the shadows — presumably preparing — during the time leading up to the third and final match.  Although the opponents once again refused to shake hands, the general mood during the time they spoke was a much more amicable one, especially as there were fewer incidents of foul play on both sides. With only 19 days to go from the end of the debate until the day the fate of the United States is voted on, the candidates had to put everything out on the line in order to win over those final voters that could make all the difference in the outcome of election.

Debate moderator Chris Wallace, an anchor for Fox News, chose topics for the candidates to wrangle over: debt and entitlements, immigration, economy, the Supreme Court, foreign hot spots and fitness to be President; although, the most memorable answers came out of questions related to: Russia’s hacking efforts, the allegations against Trump, immigration, the election being “rigged” and the peaceful transition of power.  In terms of offensive strategies, this debate resulted in the largest amount of answers concerning policies, although both candidates managed to elude the subjects at hand when it proved to be convenient.  Both Clinton and Trump stayed true to their tactics and beliefs and performed in a way that was expected. Perhaps the most shocking turn of events of this confrontation was Trump stating that he cannot say whether he will concede the election.  When asked if he will accept the outcome, he stated that he will “keep us in suspense.”  He is prepared to be the first candidate ever in the history of the United States to refuse to concede if he is not named champion.

When it came to defensive strategies, despite there being a relatively more amicable mood as compared with the first two debates, the hostility remained.  There were insults thrown around, and a few punch lines added to ridicule and mock either candidate.  Both Clinton and Trump looked upon the other with unwavering rancor, although the blows exchanged were seemingly less aggressive.  The highlight of the night in terms of foul words was Trump and Clinton quick banter in which the name  “Putin’s political puppet” was thrown around and Trump referred to his opponent as a “nasty woman”.

Apart from the several rounds of discussing policies and opinions on important subjects, the candidates each had one minute for closing statements.  Clinton went first, choosing to concentrate on reinforcing the fact that she had made families and children her “life’s work” and stating that she would continue to do so.  Additionally, she affirmed that the focus of her Presidency, if she is to be elected, would be one that supports and focuses on families and children while standing up against corporations and powerful interests.  She completed her monologue by telling the American people that she hopes they will give her the chance to be their next President.  While secretary Clinton played the offense, Mr. Trump opted for the defense.  His brief statements began with negative comments about his opponent.  He then continued to outline the focus of what his presidency would mean: to “Make America Great Again” through a focus on the military, veterans, illegal immigrants, women, inner cities and law and order, among other political aspects.  The Republican nominee ended his speech by stating that the United States “cannot take four more years of Barack Obama” and claiming that is what it will receive if Clinton were to be elected.

“Of the three presidential debates, the last one was definitely the least cringe-worthy one. I think it was the one that discussed the actual policies the most, even though the moderator’s questions could’ve been better. Three out of three debate wins for Hillary Clinton and I couldn’t be any more confident that she’s our next President,” sophomore Nikita Leus-Oliva said.

Most are raising Clinton’s hand and naming her the winner of this final showdown, including the polls which are showing Trump pulling under 40% of votes.  This could be due to the injuries Clinton inflicted on his campaign, or the several unexpected comments he made, which did not sit well with the public, including many of his supporters.  Foreign hot spots, immigration and economic reforms and most importantly the basic ideals of American Democracy, in terms of the peaceful transition of power, were all put to the test in this debate.  The candidates had to pull out all the stops in terms of offensive and defensive strategies, and everything was put out on the line.  It is now up to the American people to use the information that has come out of these three extremely eventful debates and choose the candidate that they wish to have as their next President of the United States.