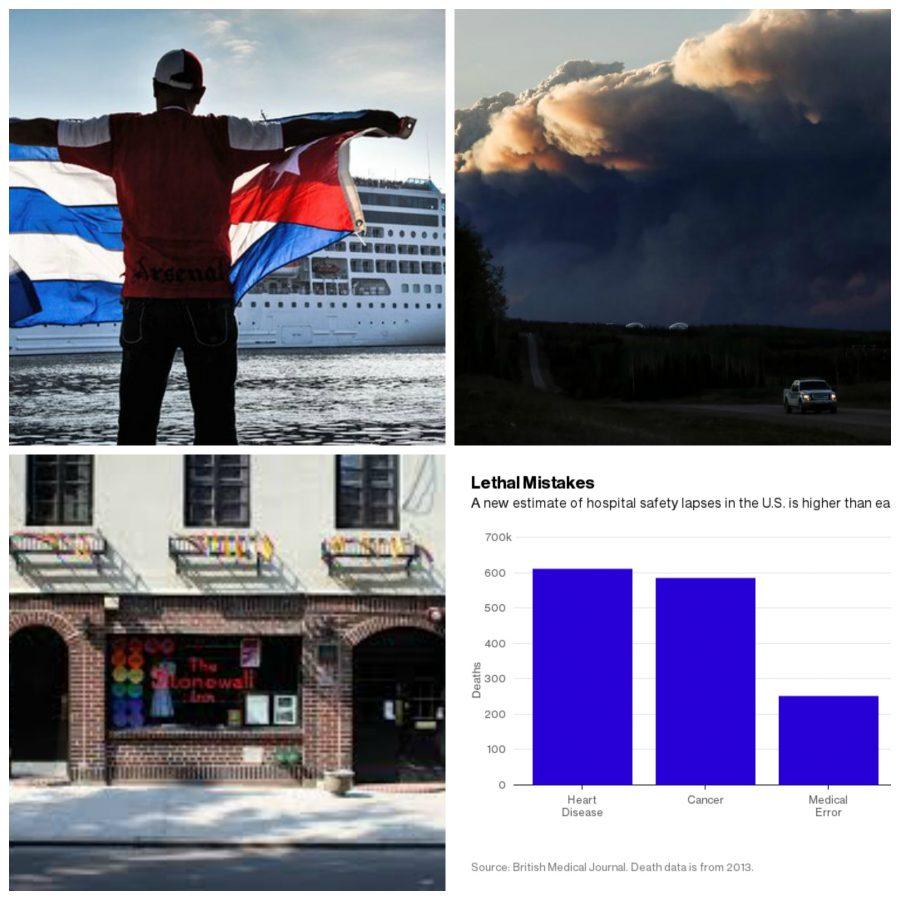 “Ana Garcia was crying and could hardly walk as she left the cruise ship that took her from Miami to Havana. It had been more than 48 years since she stepped foot in the country where she was born. “I’m just thinking of that day when we left (Cuba) and shaking like a leaf,” she said. Garcia is one of about 700 passengers on the first cruise in decades to travel from the United States to Cuba. The Adonia, a ship on Carnival Corp.’s Fathom cruise line, docked Monday in Havana. The ship’s arrival marks the first stop on a historic, seven-day voyage that signals closer ties between the United States and its communist-run neighbor.”

“Kim Jong Un, the third generation of North Korea’s ruling dynasty, boasted Friday of “magnificent and exhilarating” advances in nuclear and missile capabilities this year as he convened the first congress of the country’s Workers’ Party in his lifetime. The congress — the first held since 1980, three years before Kim was born — essentially amounts to an extravagant, state-choreographed spectacle built around Kim’s leadership. The intent was clear with each round of rapturous applause for the 33-year-old leader: a display of loyalty and bolstered legitimacy for his rule even as North Korea’s defiant policies bring further isolation and pressures.”

“Sadiq Khan has been elected the new Mayor of London – boosting Labour after it slumped in Scotland’s elections. Mr Khan is the city’s first Muslim mayor, after beating Tory Zac Goldsmith by 1,310,143 votes to 994,614. The result bolsters leader Jeremy Corbyn after Labour was beaten into third in Scotland by the Tories and lost some English councillors. In Scotland, the SNP said it would form a minority government after winning its third election in a row.”

“The Fort McMurray wildfire in Canada is already massive, but officials warned it could double in size Saturday. Dry and extremely windy conditions are fueling the blaze, which has already scorched more than 1,010 square kilometers (389 square miles) […] The monster fire — which is the size of Hong Kong and is almost 25% bigger than New York City — has displaced about 88,000 people and wiped out 1,600 structures.”

“New York’s iconic Stonewall Inn, where the modern gay rights movement took root, will become the first national monument honoring the history of gays and lesbians in the U.S. under a proposal President Obama is preparing to approve. Designating the small swath of land will mark a major act of national recognition for gay rights advocates and their struggles over the last half-century. Since the 1969 uprising in Greenwich Village, the U.S. has enacted anti-discrimination protections, allowed gays and lesbians to serve openly in the U.S. military and legalized same-sex marriage nationwide.”

“After heart disease and cancer, medical errors kill more Americans than anything else, claiming a quarter of a million lives a year, according to a study by researchers at Johns Hopkins University. If bungles and safety lapses in the hospital were accounted for as deaths from disease and injury are, they would be the third most common cause of death in the U.S., leading to more fatalities than respiratory disease, the report in the British Medical Journal argues.”

Obama Tells Flint Residents, ‘I’ve Got Your Back’

“Sipping filtered city water to show it’s again drinkable, President Barack Obama promised Wednesday to ride herd on leaders at all levels of government until every drop of water flowing into homes in Flint, Michigan, is safe to use. He also promised that the aging pipes that contaminated the water with lead will be replaced, but cautioned that the project will take time. Obama said he wanted to use the crisis to make long-term improvements to the city, where more than 40 percent of residents live in poverty.”

“A North Carolina law limiting protections to LGBT people violates federal civil rights laws and can’t be enforced, the U.S. Justice Department said Wednesday, putting the state on notice that it is in danger of being sued and losing hundreds of millions of dollars in federal funding. The law, which requires transgender people to use public bathrooms that conform to the sex on their birth certificate, has been broadly condemned by gay-rights groups, businesses and entertainers.”

Lots of changes in this week’s primaries:

“Republican and Democratic voters in Indiana went to the polls on Tuesday, May 3, to choose their presidential nominees. […] Sanders wins Indiana, Trump looks to general election […] Cruz out, many GOP insiders worried about fall…”

“John Kasich is dropping out of the Republican presidential race, he said Wednesday. Kasich’s decision to suspend his efforts came after he improbably became the last challenger to Donald Trump, who emerged as the presumptive GOP nominee Tuesday night when Ted Cruz dropped out.”