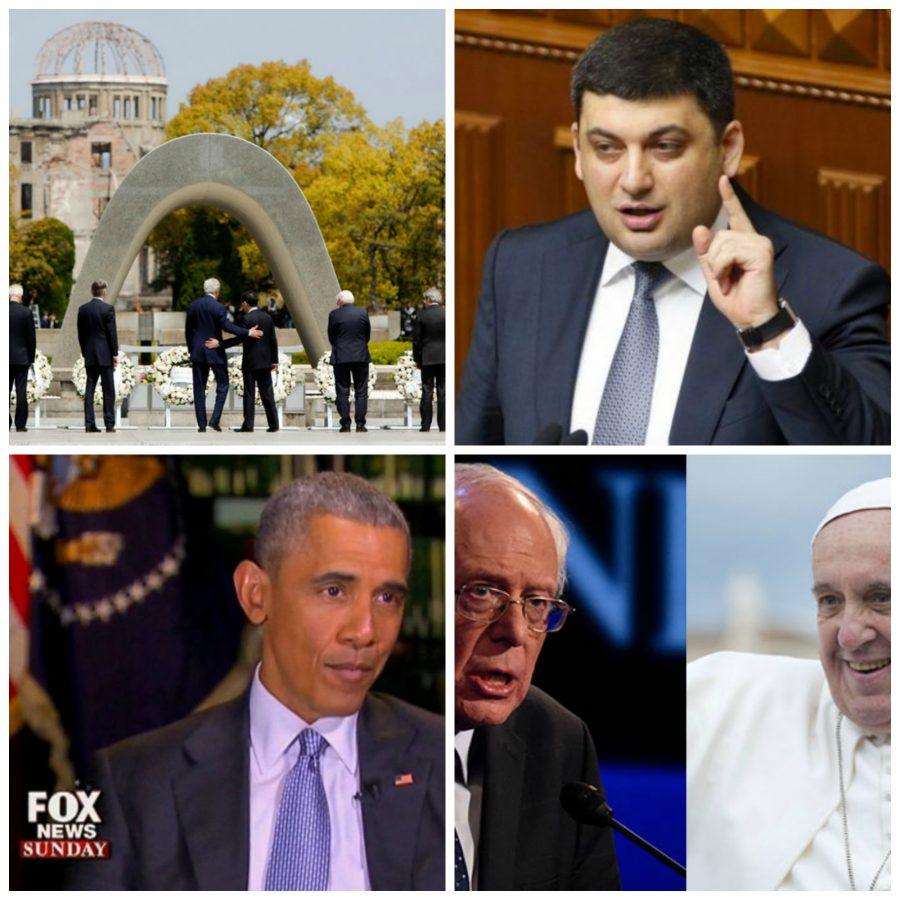 “Hundreds of people were injured when Macedonian police fired tear gas on a group of refugees as they tried to break through a fence on the Greece-Macedonia border, the medical charity Doctors without Borders (MSF) said. ‘On April 10, after the violent events at the border between Greece and Macedonia, Medecins Sans Frontieres medical teams treated hundreds, including around 40 people injured by rubber bullets. At least 10 people have reported to MSF teams that they were beaten by Macedonian police,’ MSF said in a press release on Sunday.”

“Secretary of State John Kerry attended a memorial ceremony in Hiroshima on Monday for victims of the American atomic bombing 71 years ago, becoming the highest-ranking United States administration official to visit the site of one of the most destructive acts of World War II. The visit is likely to intensify speculation about whether President Obama will go to Hiroshima during a planned trip to Japan next month. Mr. Obama would be the first sitting American president to visit the city, a decision that would resonate deeply in Japan but would be controversial at home.”

“MPs voted by 257 to 50 to approve Mr Groysman’s appointment and accept the resignation of his predecessor, Arseniy Yatsenyuk. Mr Yatsenyuk announced he was stepping down on Sunday. His government had faced accusations of corruption and inability to implement reforms. Mr Yatsenyuk had been in office since former pro-Russian President Viktor Yanukovych was ousted during huge demonstrations in February 2014.”

“Heavy rains were expected through Sunday after Japan’s Kyushu region was struck by twin earthquakes, hampering the search for survivors and forcing nervous residents into crowded evacuation centers. At least 32 people have died in the latest Kyushu earthquake, according to Kumamoto Prefecture’s disaster management office. The magnitude-7.0 quake hit early Saturday.”

“The catastrophic earthquake that destroyed buildings in Ecuador on Saturday became far more devastating Sunday, when the death toll soared to 235 — and it’s expected to rise. At least 1,500 people were injured, said Ricardo Peñaherrera of Ecuador’s national emergency management office.”

“President Barack Obama said the worst mistake of his presidency was a lack of planning for the aftermath of the 2011 toppling of Libyan dictator Moammar Gadhafi. ‘Probably failing to plan for the day after what I think was the right thing to do in intervening in Libya,” he said in a Fox News interview aired Sunday.'”

CIA director says he would not obey a waterboarding order

“The director of the CIA says his spy agency will not engage in waterboarding or other so-called enhanced interrogation techniques even if ordered to by a future president, though the position is a presidential appointment and has no set term, so a future president could nominate a different chief. CIA chief John Brennan tells NBC News that he will not agree to carry out such techniques because ‘this institution needs to endure.'”

Women’s Equality Gets a National Monument

“Two years after the National Woman’s Party moved into 144 Constitution Avenue Northeast, a three-story, red-brick building steps from the U.S. Capitol, Alva Belmont, the benefactor of the women’s suffrage group, declared: ‘May it stand for years and years to come, telling of the work that the women of the United States have accomplished; the example we have given foreign nations; and our determination that they shall be—as ourselves—free citizens, recognized as the equals of men.’ The building, today known as the Sewall-Belmont House and Museum, was designated a national monument on Tuesday. “The house tells the story of a century of courageous activism by American women,” President Obama wrote in a presidential proclamation.”

“Democratic presidential candidate Bernie Sanders met with Pope Francis on Saturday during his visit to the Vatican, the senator told CNN. Sanders, a U.S. Senator from Vermont, traveled to the Vatican to address a conference on social, economic and environmental issues. He described his meeting with the Pope as ‘extraordinary,’ saying it happened before Francis left for Greece, where he’s visiting refugees. […] ‘I just wanted to let him know how appreciative I was and the extraordinary role he’s playing throughout the world in raising consciousness about massive levels of income and wealth inequality,’ he said.”