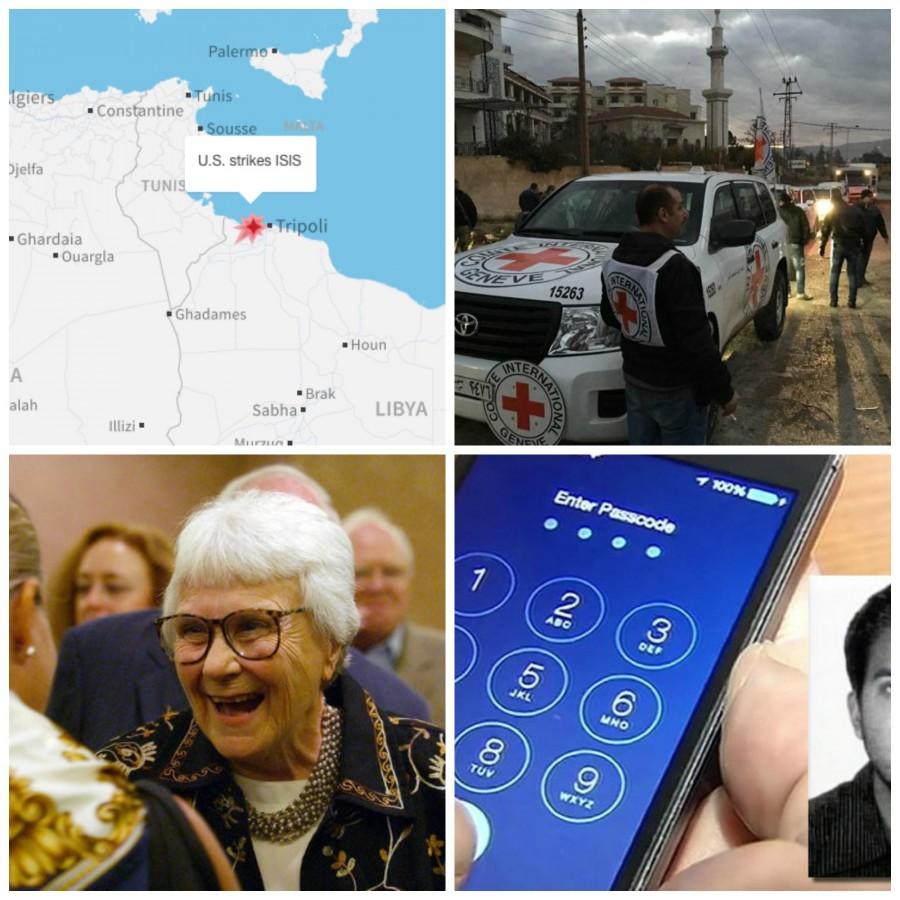 This week: US strikes in Libya, Syria receives aid, Harper Lee dies and Apple versus the FBI in San Bernardino case.

“American warplanes hit an ISIS camp in Libya where foreign fighters had been engaged in advanced training, White House Press Secretary Josh Earnest said Friday. Noureddine Chouchane, a senior operative in the terrorist group from Tunisia, was believed to be among those from around Africa and the Middle East who had converged on the site, Earnest said.”

Syria crisis: Strikes on hospitals and schools kill ‘up to 50’

“Up to 50 people have been killed in missile attacks on schools and hospitals in northern Syria, according to the United Nations. “Such attacks are a blatant violation of international laws,” the UN said. Among the sites hit was a Medecins Sans Frontieres hospital, where seven people were reportedly killed.”

“The United States and Cuba signed a deal Tuesday restoring commercial air traffic for the first time in five decades, allowing dozens of new daily flights to bring hundreds of thousands more American travelers a year to the island as early as this fall. Immediately after the signing, the U.S. Department of Transportation opened bidding by American air carriers on as many as 110 U.S.-Cuba flights a day — more than five times the current number. All flights operating between the two countries today are charters.”

“Aid convoys delivered long-awaited food, medicine and other supplies to three besieged Syrian communities Monday, part of a U.N.-supported operation to help tens of thousands of civilians cut off for months by the fighting. Reports of starvation and images of emaciated children have raised global concerns and underscored the urgency for new peace talks that the U.N. is hoping to host in Geneva on Jan. 25.”

“China has deployed surface-to-air missiles on a disputed island in the South China Sea, according to Taiwan and U.S. officials, in a move that has alarmed the country’s Asian neighbors.”

Harper Lee, Author of ‘To Kill a Mockingbird,’ Dies at 89

“Harper Lee, whose first novel, “To Kill a Mockingbird,” about racial injustice in a small Alabama town, sold more than 40 million copies and became one of the most beloved and most taught works of fiction ever written by an American, died on Friday in Monroeville, Ala., where she lived. She was 89.”

“Philanthropist David Rubenstein, who has already donated tens of millions of dollars to refurbish the Washington Monument and other icons, is giving $18 million to fix up the Lincoln Memorial. The National Park Service announced the gift Monday. The money will be used to fix the memorial’s roof, clean the marble and improve accessibility by adding a second elevator. The park service also plans to create 15,000 square feet of visitor space tucked beneath the memorial for exhibits.”

“Apple is fiercely opposing a court order to unlock the iPhone used by one of the San Bernardino shooters, accusing the federal government of an “overreach” that could potentially breach the privacy of millions of customers. CEO Tim Cook published a bullish open letter late Tuesday, pledging to fight a judge’s ruling that it should give FBI investigators access to encrypted data on the device.”

Biggest winners and losers of South Carolina and Nevada

“Saturday was a night of political drama from Charleston to Caesar’s Palace as results rolled in from the Republican primary in South Carolina and the Democratic caucuses in Las Vegas. […] Businessman Donald Trump (R) [won in South Carolina] and Former Secretary of State Hillary Clinton (D) [won in Nevada].”

“President Barack Obama slapped North Korea with more stringent sanctions Thursday for defying the world and pushing forward with its nuclear weapons program, weeks after it launched a satellite-carrying rocket into space and conducted its fourth underground nuclear test.”