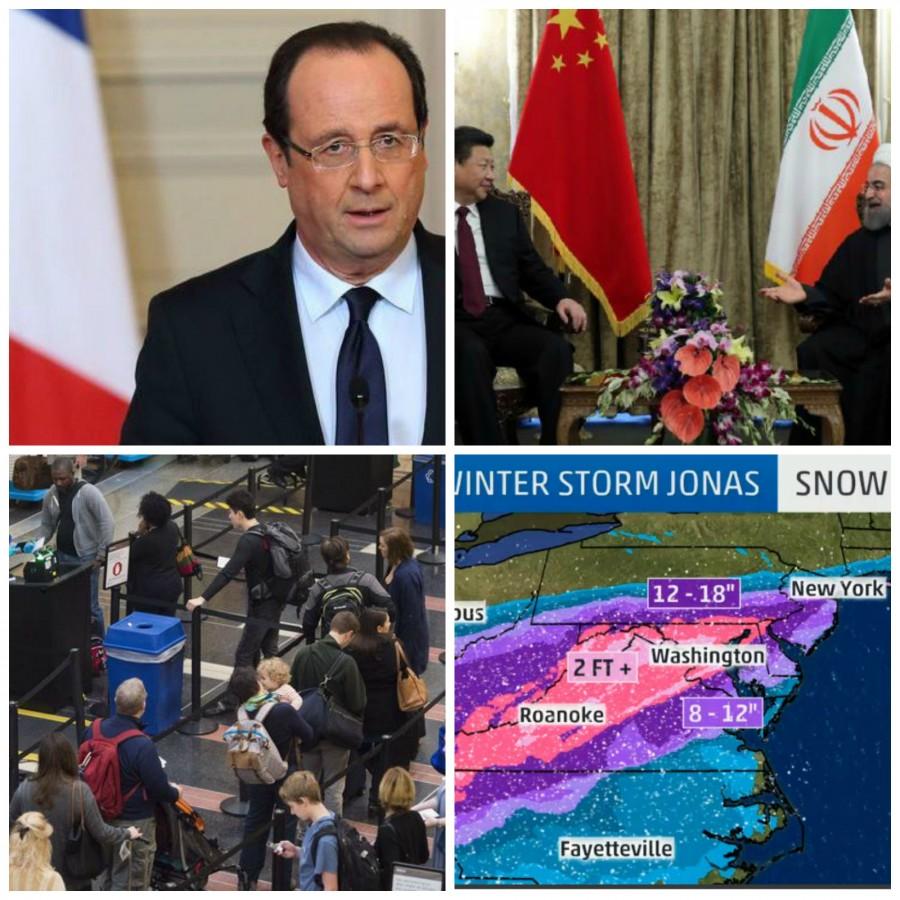 “French President Francois Hollande pledged Monday to redefine France’s business model and declared what he called “a state of economic and social emergency,” unveiling a 2 billion euro ($2.2 billion) plan to revive hiring and catch up with a fast-moving world economy.”

“For Donald Trump, in politics as in life, it seems the only thing worse than being talked about is not being talked about. But Monday, the Republican presidential candidate is entering unfamiliar territory, even by his larger-than-life standards, as members of the British Parliament hold a debate over a petition calling for the U.S. businessman-turned-politician to be banned from the country.”

China’s Economy Grows At Its Slowest Rate In 25 Years

“China’s annual growth dipped to 6.9 percent. Not since China faced international sanctions over the 1989 Tiananmen Square massacre has its economy grown at such a slow pace.”

“A new U.N. report says that nearly 20,000 civilians were killed during Iraq’s bloody conflict between January 2014 and October 2015. And that number might be significantly higher. “Despite their steady losses to pro-government forces, the scourge of [ISIS] continues to kill, maim and displace Iraqi civilians in the thousands and to cause untold suffering,” U.N. special representative Ján Kubiš says in a statement.”

“Chinese President Xi Jinping capped a three-nation tour of the Mideast by blessing wide agreements with Iran on regional politics, nuclear energy, trade and military communication, officials said Saturday. Iran was the final stop of Xi’s itinerary that earlier included Egypt and Saudi Arabia. He arrived in Iran on Friday to cement better relations, the first Chinese President to visit that country in 14 years.”

“The Supreme Court has agreed to review President Obama’s executive immigration actions from 2014 that would shield up to 5 million immigrants in the U.S. illegally from deportation. The plan has been tied up in court since 26 states, mainly led by Republicans, challenged the legality of the plan. In February 2015, a federal judge temporarily blocked the executive actions from taking place and said the states had standing to sue. He did not rule on the constitutionality of the plan.”

“Daniel Holtzclaw, the ex-Oklahoma City officer convicted of rape and other charges after he preyed on African-American women over six months, was sentenced Thursday to 263 years in prison, as recommended by the jury, according to his attorney.”

TSA detected record number of firearms at checkpoints in 2015

“Every day, Transportation Security Administration officers interact with nearly two million travelers across the United States with a single goal in mind – ensuring the safety of the traveling public. TSA had a busy year in 2015, screening more than 708 million  passengers, or 40.7 million more passengers than in 2014. […] In total, 2,653 firearms were discovered in carry-on bags at checkpoints across the country, averaging more than seven firearms per day, approximately a 20 percent increase in firearm discoveries from the total of 2,212 in 2014.”

Blizzard is over on East Coast, but Monday travel could be daunting

“Icy roads, snow-covered runways and blocked train tracks threaten to snarl morning travel in many East Coast cities on Monday, days after a massive blizzard clobbered the region. […] The storm killed at least 15 people, grounded thousands of flights and shut down travel in many of the nation’s largest cities. There were signs of some relief Sunday as residents shoveled snows and cleaned up flooding debris beneath blue skies. But officials said there was more work to be done, and schools and government offices in many areas were set to remain shuttered.”