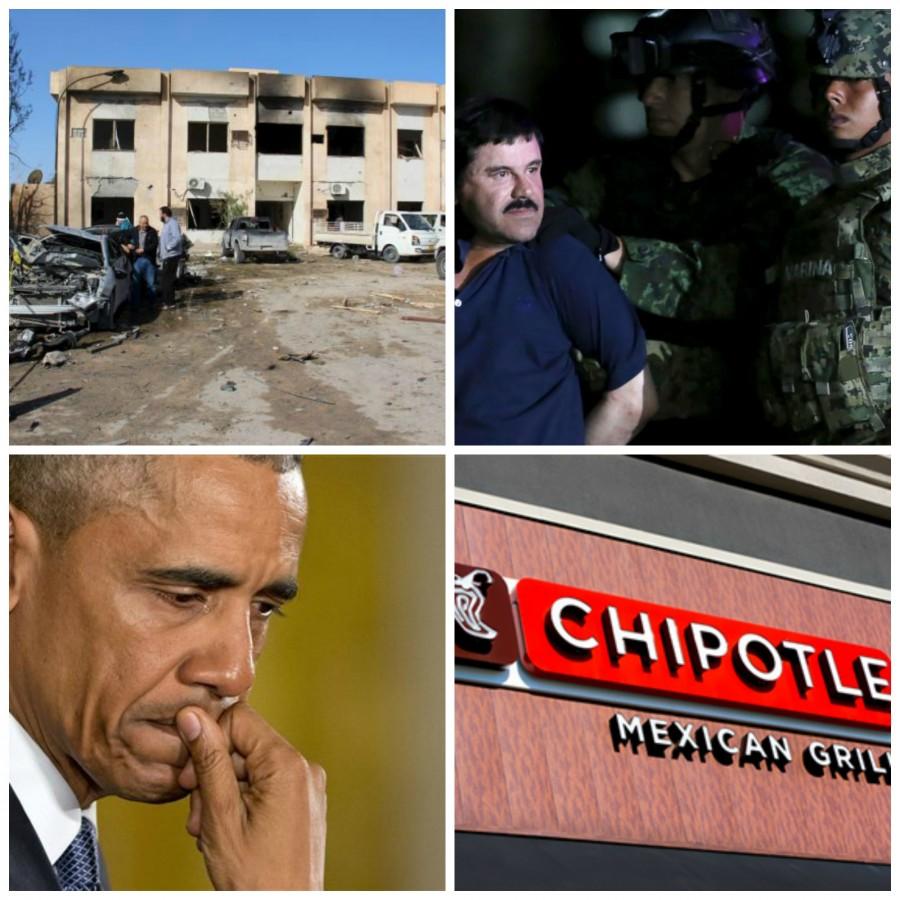 “Saudi Arabia cut ties with Iran, the Kingdom’s foreign minister announced on Sunday, deciding “enough is enough” with the Islamic Republic, according to a source with knowledge of the Saudi government’s thinking.”

“Dozens of people have been killed in an apparent suicide bombing at a police training centre in the western Libyan town of Zliten. The bomb was on board a fuel tanker, which was driven into a large group of coastguard and police cadets gathering for their morning assembly, according to the Libya Herald. A Zliten hospital spokesman told Associated Press that 60 bodies had been pulled from the wreckage, though Fozi Awnais, from the health ministry in Tripoli, later said 47 people had died and 118 more were injured.”

“Stripped to his undershirt and covered in filth, the world’s most notorious drug lord dragged himself out of the sewers and into the middle of traffic. Disoriented from his long trudge underground, with gun-toting marines on his heels, he found himself standing across the street from a Walmart. Joaquín Guzmán Loera, the kingpin known across the globe as El Chapo, would have to improvise. His cavalry was not coming.”

“Meeting for the first time in more than three years, Egypt’s new parliament on Sunday elected a constitutional expert as its speaker, a key position as President Abdel Fattah al-Sisi looks to push through more than 200 laws issued by executive decree while the assembly was suspended. Ali Abdelaal, a French-educated lawyer who helped draft the constitution and election law, is a member of the “Support Egypt” coalition, an alliance of over 400 MPs loyal to Sisi.”

“President Barack Obama moved Monday to expand background checks to cover more firearms sold at gun shows, online and anywhere else, aiming to curb a scourge of gun violence despite unyielding opposition to new laws in Congress. Obama’s plan to broaden background checks forms the centerpiece of a broader package of gun control measures the president plans to take on his own in his final year in office. Although Obama can’t unilaterally change gun laws, the president is hoping that beefing up enforcement of existing laws can prevent at least some gun deaths in a country rife with them.”

“Fears of a crash landing in China’s economy sent stocks diving around the world on Monday, the first trading day of the year. The global selloff was caused by a new report that showed China’s manufacturing sector contracted at the end of 2015. Stocks in China fell so dramatically that trading was halted for the first time ever. The Dow declined as many as 467 points and briefly fell below the 17,000 level for the first time since October. However, it bounced off the lows and ended the day down 276 points. It was still the Dow’s worst opening day of the year since 2008.”

“Sales at fast casual chain Chipotle Mexican Grillcontinue to tumble as the company’s struggle with a bout of foodborne illness issues at locations across the country deepens. The company on Wednesday reported a double dose of bad news. Sales at restaurants open at least a year slid 30% in December and fell 14.6% during the fourth quarter. Chipotle (CMG) also said it has been served with a federal grand jury subpoena over an August norovirus episode in California.”

“President Obama on Friday vetoed legislation that would repeal much of ObamaCare, the first such measure to reach his desk since it became law in 2010. Obama used his veto pen without fanfare on a legislative package rolling back his signature healthcare law and stripping federal funding from Planned Parenthood.”