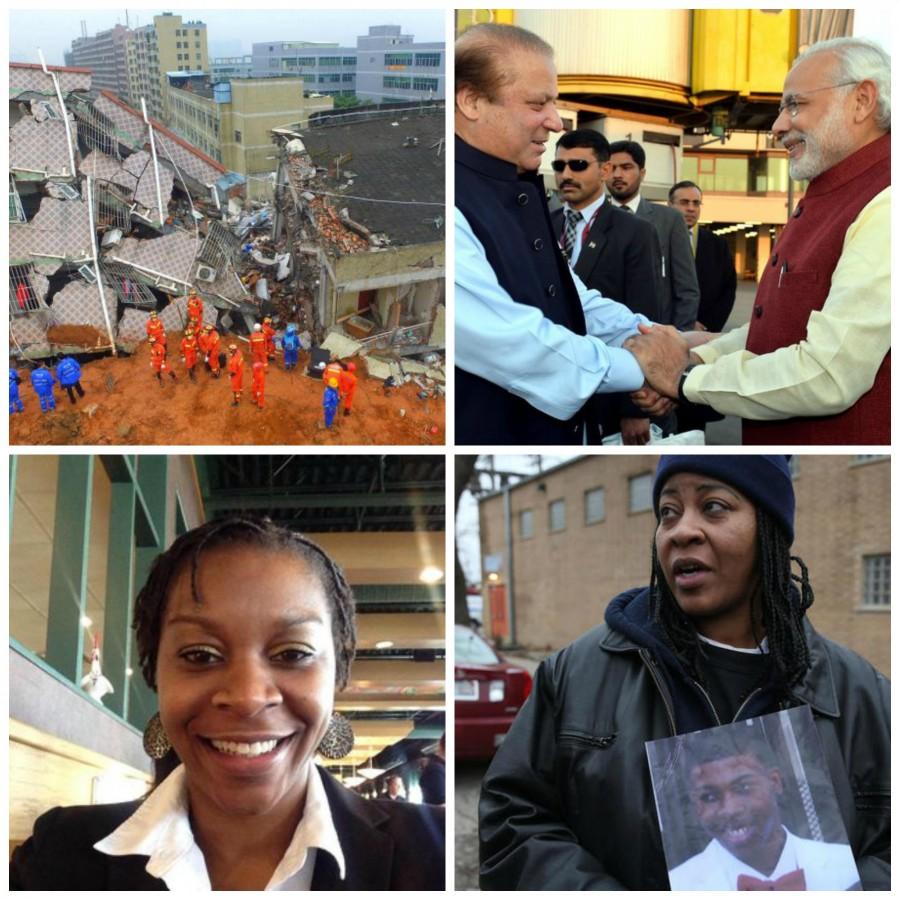 This week's news includes a landslide in China, Modi visiting Pakistan, a lack of indictment in the Sandra Bland case and another fatal shooting in Chicago.

“Sepp Blatter and Michel Platini were each banned for eight years by the FIFA ethics committee on Monday in a stunning takedown of world soccer’s most powerful leaders. FIFA President Blatter and his one-time protege Platini were kicked out of the sport for conflict of interest and disloyalty to FIFA in a $2 million payment deal that is also the subject of a criminal investigation in Switzerland.”

“The Israeli Air Force reportedly carried out an airstrike in Syria that killed Samir Quntar, a notorious Hezbollah member, and nine others on Dec. 19. Quntar was likely a mid-level Hezbollah operative directing some of the group’s operations in southern Syria. He achieved notoriety for carrying out an attack in Israel’s northern city of Nahariya in 1979, during which he murdered an Israeli father and his four-year-old child, subsequently becoming a symbol within Hezbollah.”

“Close to 3,000 people were part of the massive rescue effort underway Monday after a landslide in south China, state media reported. A man-made pile of construction waste and trash collapsed on buildings in an industrial park in Shenzhen, a city in Guangdong province.”

“All six of the NATO service members killed Monday in a motorcycle bomb attack in Bagram, Afghanistan, were American, U.S. Defense Secretary Ash Carter said. A suicide bomber on a motorbike carried out the attack on a joint patrol of Afghan and coalition forces at about 1:30 p.m. in the Bajawri area of Bagram district, said Waheed Sediqi, a spokesman for the governor of Parwan province. ”

“India’s Prime Minister Narendra Modi made a visit to Pakistan on Friday. It’s the first trip to the country by an Indian head of state in a decade — and could be a sign of improving relations between the two neighbors. The visit was unexpected.”

“Officials in Nashua, New Hampshire, told all public school students Sunday to stay home Monday because of a “specific” threat aimed at two high schools. “We have received a detailed threat of violence to harm students and staff at both high schools,” Superintendent Mark Conrad announced on the school district’s website Sunday. “The threat is specific to tomorrow [Monday]. We have been working closely with the Nashua Police Department, which is still working at this time to determine the credibility of the threat.””

Grand Jury Declines to Indict Anyone in Death of Sandra Bland

“Grand jurors in Texas declined on Monday to indict anyone in connection to the July death of a Chicago-area woman, Sandra Bland, who was found hanged in her cell at the Waller County jail, one of the special prosecutors assigned to the case said. But Darrell Jordan, the special prosecutor, said that “the case is still open,” and that grand jurors would reconvene next month to discuss other aspects of it.”

U.S. plans raids to deport families who surged across border

“The Department of Homeland Security has begun preparing for a series of raids that would target for deportation hundreds of families who have flocked to the United States since the start of last year, according to people familiar with the operation. The nationwide campaign, to be carried out by U.S. Immigration and Customs Enforcement (ICE) agents as soon as early January, would be the first large-scale effort to deport families who have fled violence in Central America, those familiar with the plan said.”

“Thirty-six years after their capture, the Americans taken hostage in Tehran in 1979 are set to receive millions in compensation for their 444 days of captivity. Thanks to a provision in the spending deal signed into law last week, each of the 53 hostages and their estates are set to receive up to $4.4 million, with spouses and children eligible for a $600,000 payment.”

“Police responding to a call about a domestic disturbance shot and killed a 19-year-old engineering student and a 55-year-old mother of five, and authorities acknowledged late Saturday that the woman had been shot by accident. The families of both victims demanded answers after the deaths, which were the first fatal shootings by Chicago police officers since last month’s release of a 2014 video of Laquan McDonald’s death put a national spotlight on the city.”