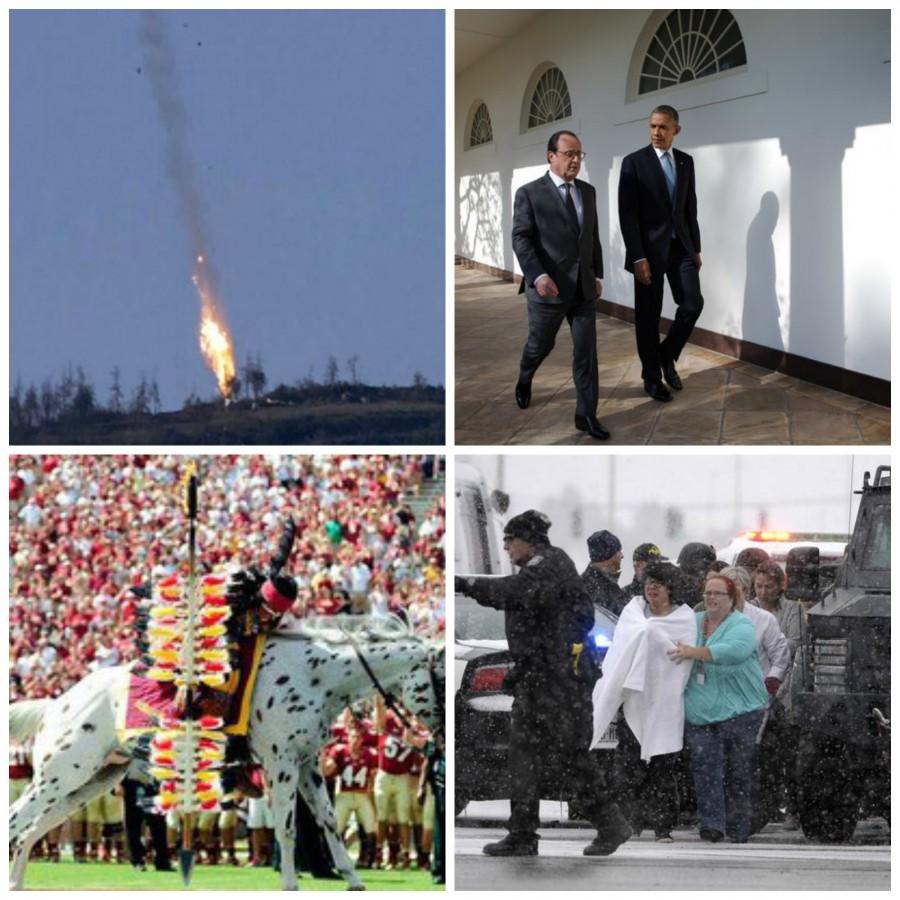 “Turkish warplanes have shot down a Russian military aircraft on the border with Syria. Russian President Vladimir Putin said the Su-24 was hit by air-to-air missiles fired by Turkish F-16s while it was flying over Syrian territory. But Turkish military officials said the plane was engaged after being warned that it was violating Turkish airspace.”

“President Obama offered his visiting French counterpart emotional words of solidarity on Tuesday but made it clear that it was up to Europe to escalate its efforts to combat the terrorist group that killed 130 people in Paris this month. In their first meeting since a cascade of shootings and suicide bombings terrorized the French capital on Nov. 13, Mr. Obama and President François Hollande resolved to increase cooperation in the battle against the Islamic State, the group that claimed responsibility for the attacks.”

“ISIS has claimed responsibility for bombing a bus carrying members of Tunisia’s presidential guard, the latest deadly attack to roil a country once hailed as one of the few success stories of the Arab Spring. Twelve people were killed in Tuesday’s explosion in Tunis, according to the Interior Ministry. A suspected suicide bomber also died.”

In Africa, Pope Francis Makes His First Visit to a War Zone

“Pope Francis made his first visit to a war zone on Sunday, landing in the capital of this divided and destitute country in a bid to support efforts at peace and reconciliation. The toll of the two-year sectarian war was on stark display just a few yards from where the pope’s plane landed, with thousands of people spread out in a makeshift camp on the edge of the runway.”

“Sixteen people were injured when two groups opened fire on each other during an impromptu gathering of several hundred people to record a music video at a New Orleans playground Sunday night, police said.”

“In a deposition this past summer, the woman charged with running the office that deals with victims of, among other things, sexual violence on the Florida State campus claimed that 20 women were sexually assaulted by members of the Seminole football team over the past nine years.  The former director of FSU’s victim advocate program, Melissa Ashton, went on to claim that the accused football players received special treatment and that most of the alleged victims chose not to pursue student-conduct charges “a lot of times based on fear” of reprisals.”

“Protesters clogged Chicago’s downtown shopping district and tried to block store entrances on a soggy Black Friday, calling on police officials to step down after the shooting of a black teenager by a white officer. “What do we want? Justice. When do we want it? Now!” chanted a wave of marchers, which included the Rev. Jesse Jackson.”

“Two civilians and a police officer were killed when a gunman opened fire at a Colorado Planned Parenthoodclinic in a nearly six-hour standoff Friday. The suspected gunman is Robert Lewis Dear, 59, a law enforcement official told CNN. The official did not provide additional information.”

“The National Security Agency on Sunday will end its mass collection of data about Americans’ phone calls under the Patriot Act, 2 1/2 years after a leak by former NSA contractor Edward Snowden forced the government to confirm its existence. The halt was ordered by Congress, which in June passed the USA Freedom Act to ban the controversial collection of information known as metadata. That data includes the dates and durations of phone calls and logs of call times, but not content.”