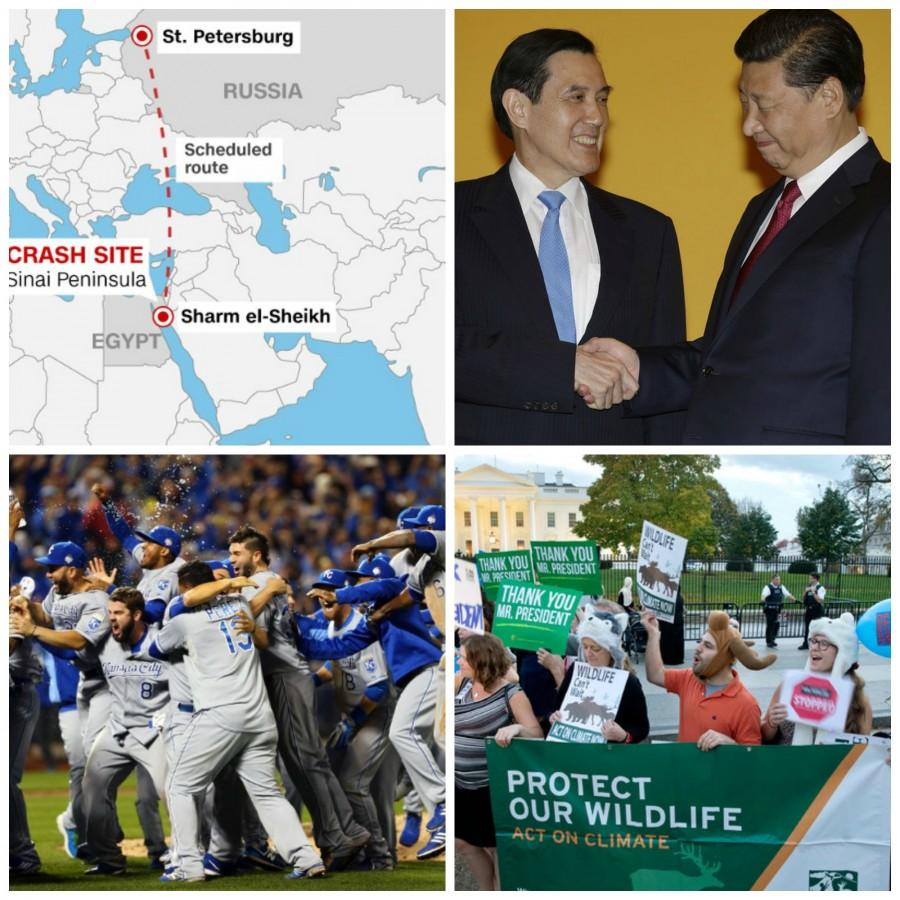 This week news stories include a Russian plane crash over Egypt, China and Taiwan leaders meeting for the first time in decades, Royals winning the World Series and Obama rejecting the Keystone XL Pipeline.

“With almost all ballots counted, the state-run Anadolu news agency said the AKP had won 49.4% of the vote, with the main opposition CHP on 25.4%. President Recep Tayyip Erdogan said voters had “shown that they prefer action and development to controversy”.” AKP is the Justice and Development Party, or Adalet ve Kalkınma Partisi, in Turkey and the CHP is the Republican People’s Party, or Cumhuriyet Halk Partisi. The AKP is the more conservative party.

Russian plane crash in Egypt: It’s too early to determine cause, officials say

“How close are authorities to pinpointing what caused a Russian passenger jet to break up in midair and crash in Egypt’s Sinai Peninsula? That depends whom you ask. The airline says technical faults or human errors couldn’t have caused Metrojet Flight 9268 to crash. But Russian officials say it’s too soon to tell what made the passenger jet plunge to the ground Saturday, killing all 224 people on board. […] Analysts say heat flashes could be tied to a range of possibilities: a missile firing, a bomb blast, a malfunctioning engine exploding, a structural problem causing a fire on the plane or wreckage hitting the ground.”

“In a landmark moment, the presidents of China and Taiwan held an 80-second handshake ahead of a historic meeting in Singapore on Saturday. The handshake marked the first time that the two sides of the Chinese Civil War have come together since the Communists won the war in 1949, forcing the losing Nationalists to begin running their government from Taipei.”

“A survey across 40 countries around the world found most people see global warming as a serious problem, and most of them want their governments to limit emissions as part of a global agreement being negotiated in Paris in a month. Respondents in the United States and China — the two biggest emitters of the gases that heat the planet — were least likely to be worried about climate change, according to the study by the Washington-based Pew Research Center released Thursday.”

“An assault of an Uber driver Friday night in Southern California was caught on camera. When the driver asked an allegedly drunk passenger to get out of his car, the rider went on a rampage, reports CBS News correspondent Mireya Villarreal. Edward Caban had a rough ride when he picked up the passenger at around 8 p.m. who he says wouldn’t wear a seatbelt and couldn’t provide clear directions to his destination.”

“When owner David Glass chose Moore to resurrect this franchise, Moore dreamed about a parade threading through the streets of Kansas City. The final step of his vision — which restored his organization’s credibility within the game, revived the sport in his community and delivered night after night of indelible memories — will happen on Tuesday along Grand Boulevard. Because at 34 minutes after midnight in New York, the Royals captured their first world championship since 1985 with a 7-2 victory in 12 innings in Game 5 over the Mets.”

“President Barack Obama announced Friday that he is rejecting the Keystone XL pipeline proposal, saying the project “would not serve the interests of the United States.” The president cited concerns about the impact on the environment and a political climate that over-hyped the pipeline’s benefit.”