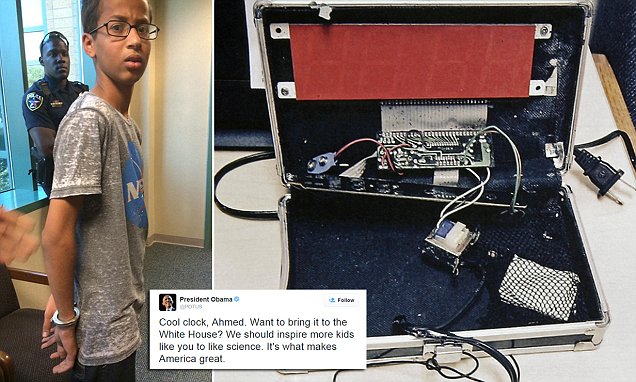 Mohamed's story gained a lot of attention and support including a tweet from President Obama.

On Monday, Sept. 14, 14-year-old Ahmed Mohamed was arrested under the belief that he had taken a bomb to school. He had created a homemade clock but teachers mistook it for a bomb and called the administration and the police. He was interrogated by police offers at his school and then taken to the police station to get fingerprinted and even had his mug shot taken.

“Frankly I think this story is crazy and although we should take precaution for our safety it’s pretty evident that one of the major factors in this incident was the boy’s racial background and in my opinion that’s not okay, ” junior Laritza Ramos said.

Once the police officers investigated, they realized it really was just a clock and Mohamed’s parents were able to pick him up from the station. He was suspended from school when the arrest happened and has since then been allowed to return to school; nonetheless, he is transferring to a different high school. The police stated they would not press charges on the incident.

His story gained popularity and the hashtag “#IStandwithAhmed” began to trend on Twitter on Wednesday. Users began to post pictures with watches and clocks in solidarity. He even received tweets from Barack Obama, Hillary Clinton, and Mark Zuckerberg. He was invited to the White House for Astronomy Night, where engineers, scientists, teachers, astronauts, and students examine the stars from the South Lawn.

Some people claim that this incident is an example of the rising islamophobia throughout the US, stating that matters would not have been taken so far if the student had been white. The police department made a statement where they explained that they were wrong to accuse Mohamed but would have done it even if the student had been white, with the safety of the school and the entire student body in mind.

This incidence has been a popular way  to educate the public and prevent stereotyping from affecting Muslims on the assumption that all Muslims are terrorists.