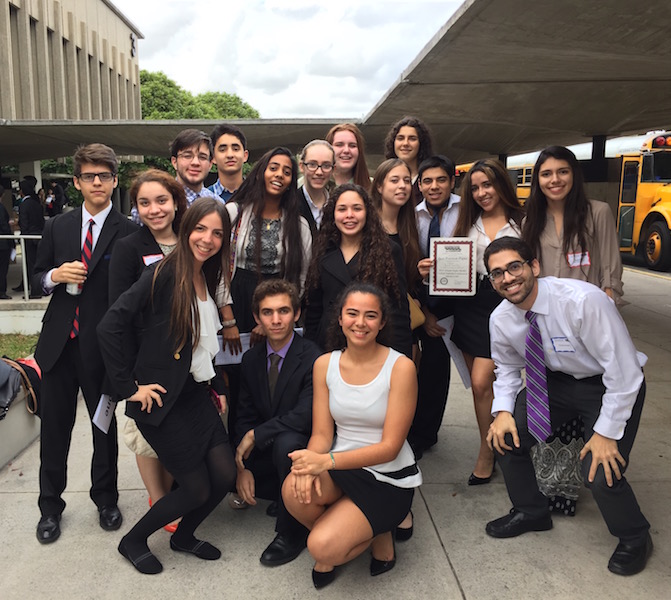 After a successful day at the Model UN conference, students are hopeful about future conferences.

On Feb. 21, 16 students participated in the Model UN Conference at the Miami-Dade College North Campus. Meeting as early as 7:30 a.m., the students and their chaperone, History Teacher Mr. De Armas, headed to the conference not knowing what to expect.

“I loved Model UN, I felt like it was a great experience in which I got a glimpse of how the real United Nations worked and was able to work with students from various schools to help solve some of the world’s main problems,” sophomore Olivia Pelaez said.

The opening ceremony began at 9:00 a.m., as Miami-Dade County students, from a variety of middle and high schools, filled the room. About half an hour later, students were then divided into their committees to begin the actual conference.

“I learned how there are many procedures that need to be followed in a meeting. I also learned how to debate, a skill that I will surely need in the future” sophomore Mark Huertas said.

During the conference, students represented a country (assigned to them prior to the conference) and debated relevant past and present world issues ranging from natural disasters to the Cuban Missile Crisis. After debating and making agreements with other delegates, a number of ‘resolutions’ were passed by each committee. When the clock struck 4:00 p.m., delegates attended the closing ceremony. Gables’ very own juniors, Maria Victoria Paredes and Rebecca De La O, were awarded the title of Best Position Paper in their committee for representing the country of Algeria.

“[Winning] was so shocking. I had never gone to a Model UN  conference before so I didn’t really know what they expected on the position paper. I wrote what I thought answered the question but Maria Victoria added a really important detail that I think is what won us the award,” junior Rebecca De La O said.

After hours of debating and learning about other countries, the delegates experienced a conference like never before. The next conference will be held April 17-19 at the University of Miami. Stay tuned to find out about more of Gables’ successes in Model UN.