Vinyl Records Are Back 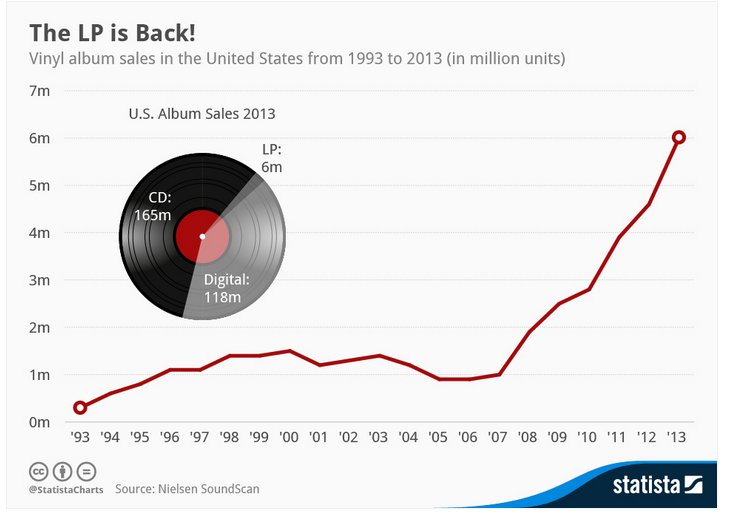 The sales of vinyl records have increased significantly in the past 6 years, with an 800% increase expected at the end of 2014.

The use of vinyl records, or LPs, is gaining popularity quickly. Many vinyl lovers claim that a deeper and room-filling sound is produced from vinyl records in comparison to speakers and earbuds. There is also a general attraction to the nostalgic feeling that arises from collecting records, along with the excitement of shopping for records and looking through one’s collection as a visual reflection of one’s musical interests. Another reason why records differ from CDs and cassette tapes is their ability to grow in value rather than decay. Record boxes become a valuable collection rather than an old box of junk. With the recent growth in record sales, the investment in LPs may become more and more commonplace.

“I think more people should invest in record players, I feel like the music sounds deeper and less touched-up,” sophomore Joshua Manrufo said.

In 2013, the sale of vinyl records reached its highest point since 1991, with over six million units sold, despite the rapid decline in any other music sales, including digital music and CDs. From 1991 to 2007, the amount of units sold annually stayed around about 1 million. Ever since 2007, however, the sales have skyrocketed. The total amount of records sold in 2014 is expected to be about 8.3 million units, a huge jump from 2007’s 1 million. Many analysts attribute the increase in vinyl sales to the recent technology boom. With the digitalization of music, there was bound to be a desire for simple, vintage technology, just as cars with manual transmission also remain popular. Ironically, the increase in digitized technology actually benefits the record industry, because digital technology can be used to make the source of the record, or the imprint which the vinyls reproduce, sound better.

“I also enjoy the whole aspect of collecting records and constantly finding steals to add to my collection,” Manrufo said.

While increased revenue is always great for businesses, because of the sudden increase in record sales, a lot of record pressing companies are having trouble keeping up. Most record-pressing machines were made in the 1970’s and currently sell for about $25,000. On top of this expense, record pressers need to recondition the machines to work more efficiently through the growing demand. The rapid increase in sales may be somewhat contingent on a misconception, however. Vinyl records actually differ from the original recording more than electronic versions (assuming that the music is bought legally and from a reputable online source). The “warmth” of LPs is commonly said to be due to all of the slight imperfections, and the surface noise of the needle against the vinyl.

“My stereo system is better than any records because my bass makes my room vibrate and I can play any music rather than just vinyls,” senior Antonio Fernandez said.

In defense of record enthusiasts, however, if listeners appreciate this added sound and the individual listening experience that comes with records, who can argue against that?