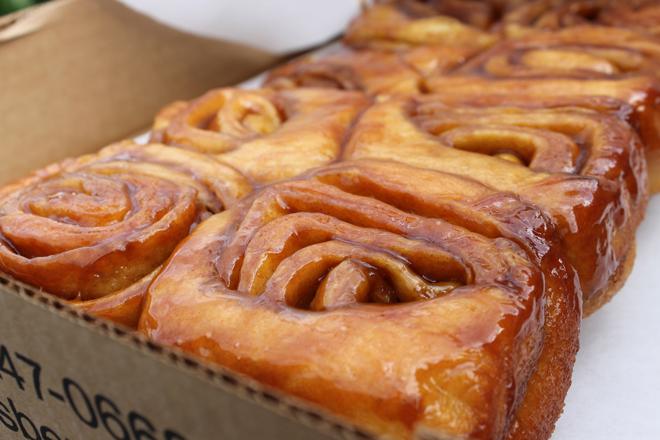 On Oct. 28, 2014, something big happened: Knaus Berry Farm opened its doors for the season. While this may seem like a relatively insignificant event to anyone that has not eaten one of their cinnamon rolls, these rolled up pastries from heaven are definitely worth the excitement.

“There was a large, dark chunk of my life that I was ignorant to the cinnamon angels that are only a short drive away. Now that I am far too aware of the cinnamon rolls’ existence, I can confidently say that I am a more worldly and satisfied man,” senior Daniel Ruiz said.

Over 55 years ago, the Knaus brothers started selling fruit from a stand on the side of the road. Now, there is often times a line that reaches the side of the road from the farm house hundreds of feet away. While most people think that the residents on this farm are Amish, they are actually Dunkers, which means that they are members of the “Church of the Brethren,” a Baptist denomination. Because of this, the farm is closed on Sundays, which is a slight inconvenience for high school students, and also makes the Saturday line larger. Admiration should be given, however, for their dedication to religion regardless of potential profit. The menu seems to be growing every year, but the specialties have remained the same for decades. The cinnamon rolls sold on the farm are unlike any other type, due to their moistness and fluffiness. This farm is also very famous for their milkshakes, made with fresh ice cream and fresh fruit. Other notable items on the menu include multiple types of bread, cheesecakes, pies and jellies.

“I think it’s awesome because what’s better than eating food that you picked yourself. Also, their milkshakes and cinnamon rolls are so good they’re worth cheating on my vegan diet for,” senior Raquel Braun said.

Despite the farm’s widespread fame, the prices have remained low. A half dozen of cinnamon rolls is a meager $4.55, and a small milkshake is only $3.95. It is important to visit the farm while still possible, because it is only open from November until April. Located at 15980 SW 248 Street, the drive is long but the satisfaction that the delicious food brings makes up for it and then some.

“All of my many fond memories have been at the farm. Laying on the floor with strawberries surrounding me causes an indescribable feeling of nirvana,” senior Edmundo Rivero said.

Whether looking for a fun Saturday activity, or looking for the best cinnamon rolls on the planet, Knaus Berry Farm is the place to go.