Out of State College Tour 2014 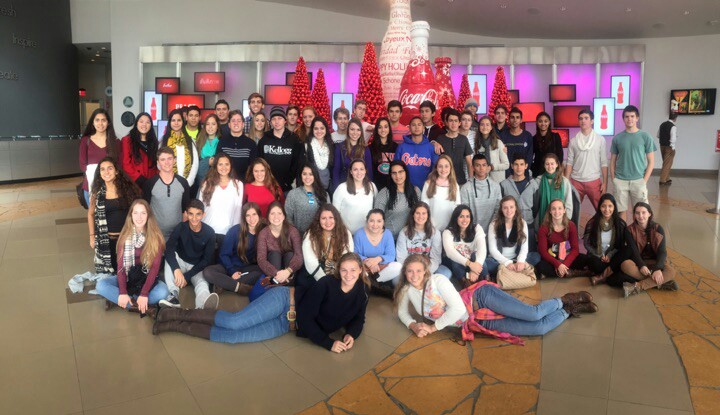 Juniors gather at the Coca-Cola Factory, one of the many stops of out of state college tour.

Students gathered early on Nov. 10 as they anticipated the beginning of the first Out-of-State College Tour. For the first time in Cavalier history, students were able to explore schools outside of the state of Florida and determine whether living out of Florida for the next four years was a realistic option. The journey began in-state as they drove up to Orlando to visit the University of Central Florida. Then, they traveled up to Gainesville and dined at “Gator Corner” in order to familiarize themselves with the concept of meal plans. The students spent the night in Gainesville, and the next morning started their tour of the University of Florida (UF). Gables alumni led groups of 12-15 people around the campus and showed the juniors what being a Gator was all about.

“Honestly, I did not expect to like any of the schools within the state of Florida, but I fell in love with UF. The tour guides did a great job showing us the truly significant parts of campus and they took us to the places they knew we would be interested in. I’m super excited to apply, and who knows… maybe I’m a Gator in the making,” junior Gisselle Gonzalez said.

The adventure continued as the students visited Florida State University (FSU) in Tallahassee and were pleasantly surprised by the vast campus, as well as its very hilly pathways. However, the juniors were excited to finally start the out-of-state route. The next day consisted of a tour of Emory University, Georgia Institute of Technology (Georgia Tech), a tour of the Coca-Cola Factory and a relaxed afternoon in Centennial Park.

“The day we spent in Atlanta was very hectic but extremely enjoyable. I loved Georgia Tech and can really see myself attending. Their engineering program is fantastic and their recreation center is truly astounding. Who knew there was such a thing as underwater hockey? Centennial Park was a great way to end the day because we finally had time to sit back and relax; it was a fantastic day,” junior Bremer Cordoba said.

In the next two days, the juniors got to really explore North Carolina. Getting an early start with Davidson College, the students were able to explore one of the many Posse schools. With an admissions officer as the tour guide, those interested had the opportunity to have their questions fully answered. The next tour was of Duke University; the majority of the students were mesmerized by its intricate architecture and rigorous academia. The last day of touring was spent at North Carolina State University (NC State) and at the University of North Carolina at Chapel Hill (UNC Chapel Hill).

“College tour was a great success and I’m so happy that it worked out and enables future classes to be able to travel out of state. I fell in love with almost every campus and it made me excited to start the college process. Planning it was not easy but it was definitely worth all the fun and enriching experiences we had,” junior Jordan Payne said.

As the students said goodbye to the cold weather and campuses, they prepared for the trip home and all their memories were shared on a plethora of social media sites with the hashtag #CGCT2014.  Overall, this trip served as a great means of introduction to the college admissions process as well as a great break from the everyday scholastic routine.