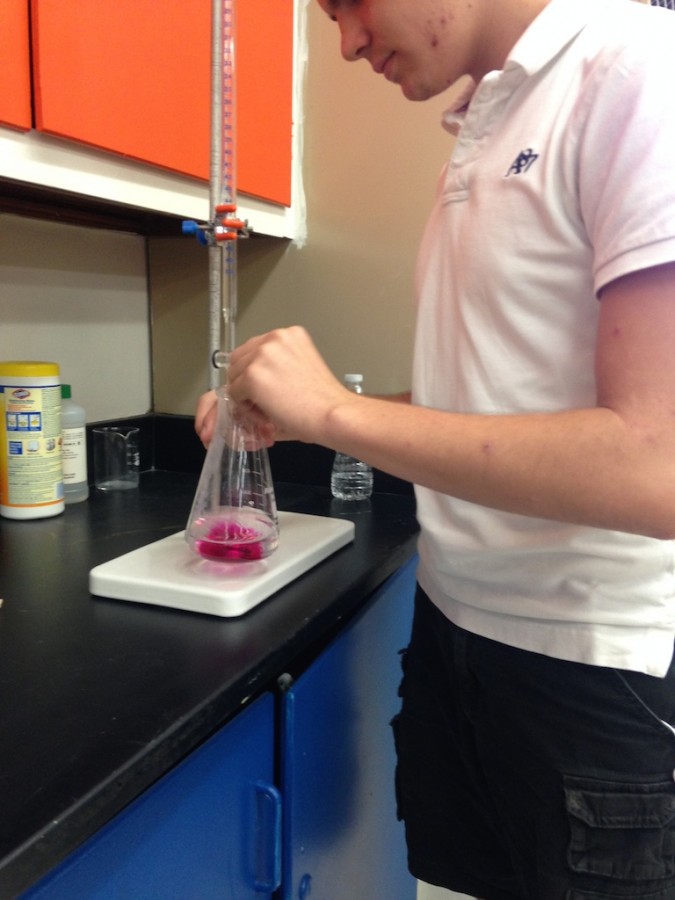 Junior Kevin Torgas explores his love for Chemistry while performing an experiment.

Every year students in the International Baccalaureate (IB) Program are faced with the challenge of the “group four”, or science, requirement. In order to receive their IB diploma, every student must complete a science requirement in the form of a group project. Students are grouped in such a way that Biology, Physics and Chemistry students can all integrate what they have learned in class and apply it to a real-life situation. This year’s theme is “Technology and the Environment”; students must produce a science fair-like project that incorporates the theme and is applicable to the real-world. The IB group four project is designed so that students develop critical thinking skills and learn to work with others.

However, some students question whether there are any benefits to the project. Although IB has several means through which it can prevent unethical work strategies during the project, such as unbalanced group work or lack of social skills, some students easily become frustrated with uncooperative team members or simply a lack of ideas.

“While students can report other students that are not putting in an adequate amount of work and effort, there will always be some students that will carry more of the workload than the rest… I think IB does an adequate enough job to penalize any slackers. Of course, it ultimately comes down to the students to ensure everyone is doing their job and that the work is equally divided amongst its members,” senior Julio Membreno said.

It seems odd that students become disheartened when faced with a project that could be done in a short amount of time, especially when it is being done by a group. In fact, students are encouraged to talk to their teachers in order to get ideas and even materials for the project.

“[Students] memorize the material and don’t fully understand the concepts, so it’s difficult to integrate that into a lab they have to make on their own. However, [the project] does help students, it forces kids to work with people they don’t know and sometimes with  people they normally don’t associate with; they have to do that in life, you’re often times thrown into situations where you’re not used to in the working environment,” IB Biology teacher Mr. Molina said.

Students seem to be overwhelmed by the numerous options they have to chose from regarding their research question. Because the theme given is so broad, most students have trouble integrating all three sciences and finding a project that is simple yet significant.

“The hardest part about coming up with a topic was dissecting broad ideas and coming up with one specific experiment which could then integrate biology, chemistry, and physics,” junior Ivan Grela said.

Furthermore, because the total number of students is approximately 3400, so the school does not have enough materials for all students in science classes and those conduction their group 4 project. Because the instrumentation required for a science project is not usually cheap, some students choose to change their research question due to cost and time limitations.

“[Availability of materials] made me reevaluate the projects that I could do. I had many ideas but some would not work  since I needed additional materials and equipment as well as another place to go do it,” junior Kevin Torgas said.

Although students struggle to obtain ideas for their project, and it can be difficult to work with strangers at times, ultimately, fulfilling the IB group four project will prove some kind of benefit for students in the form new knowledge, cooperative work strategies or even forming new friendships. We look forward to seeing the finalized projects on December 12th!