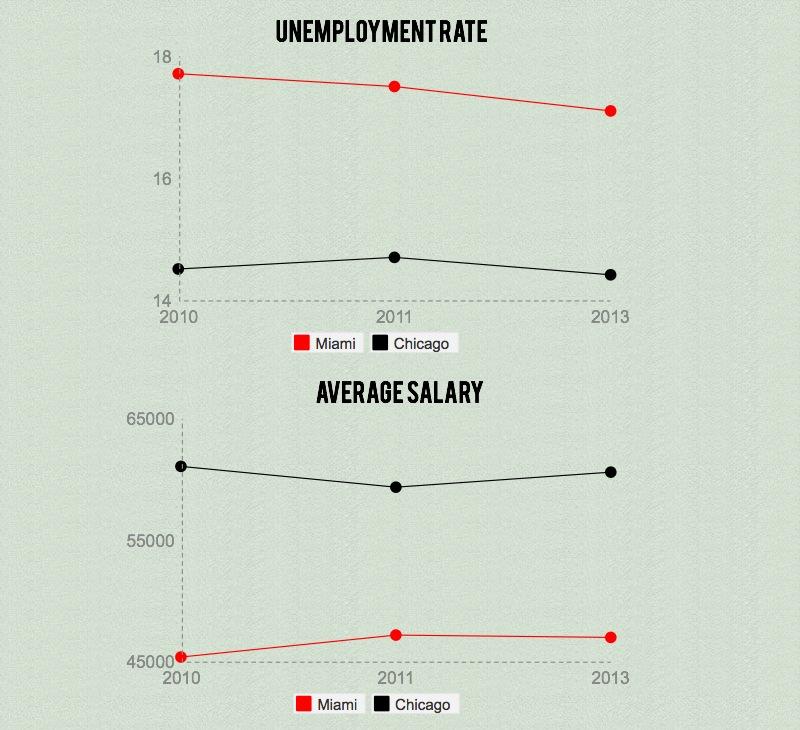 This infographic displays the difference in wages between Miami and Chicago, two similarly large cities.

Even as Florida governor Rick Scott would like to claim that hundreds of thousands of jobs have been created under his administration, many of these jobs inundated the economy with low-wage, low-skill workers. According to the Center for Economic and Policy Research, a “good job” in the United States is “defined as one that pays at least $18.50 an hour, or $37,000 a year, has employer-provided health insurance and a retirement plan.” Simple statistics that show higher rates of employment imply that the economy is getting better- but simple numbers don’t always tell the whole story. When people rush to find jobs, most take the ones that offer very low wages and few to no employee benefits. A large amount of  low-wage jobs are contributing to an extremely low median income in the state of Florida, especially in major metropolitan areas such as Miami, West Palm Beach and Fort Lauderdale.

The problem in Miami is the worst in the state. With a median household income level of $46,946, Miami is ranked the second lowest in the nation’s top 25 metro areas. Although new jobs are reportedly being created, the population living below the poverty line is increasing.  Miami has the second highest level of those living in poverty or near poverty (17.7%). Yearly trends demonstrate the increasing problem. According to the Miami New Times, only 17.1 percent of the population lived below the poverty line in 2010, while in 2012 that number rose to 17.5 percent.

“I definitely think we need to implement a living wage since we are service based, but I can understand how people like waiters and waitresses would prefer to live on tip wages, which in some cases is more profitable. I think it should be up to the employer to choose whats best for their employees. When you get down to it, you make the best money and get the best service when your workers are happy,” senior Maggie Rivers said.

According to a report by the United States Bureau of Labor Statistics (BLS), the gap between the rich and the poor is even wider in Southern Florida than in other states. While the national average for hourly wages for those in “management” fields across the U.S. is $53.13, the average reported by the BLS in Miami is $58.13. Meanwhile, the wages of workers in fields such as farming, construction and maintenance make wages between 11 and 17 percent lower than the national average, translating to a monetary difference of about 2 to 3 dollars an hour. In addition, a stronger education system would bring up wages, meaning more people pursuing higher education would lead to more higher skill jobs. Despite this, however, Rick Scott approved $300 million in cuts for Florida’s 11 public universities.

“I think more state funding needs to be put toward higher education, because ultimately a more educated society is one that has higher living standards,” senior Claudia Perez said.

The Southern economy was also built differently than that of the North. Florida started out as a pristine land for vacations, with white sandy beaches and plenty of undeveloped land. Industry came later, and when it did, it often brought low-wage, unskilled jobs. Florida isn’t a manufacturing and technology-centered state. Its industry is primarily concentrated around lumbering and agriculture, both of which are low- paying occupations. Florida’s economy is largely a service economy, one that produces no products but only provides services. The service economy is shown to have grown the least, compared to the financial services and trade sectors. According to city-data.com, “The financial services and trade sectors (wholesale and retail) each grew by more than 27% from 1997 to 2001, and general services (including hotels and tourist services) grew 36.9% during this period.” The influx of low-paying jobs does not affect only Florida, but the rest of the United States. As manufacturing jobs are slowly moved offshore, industry nationwide is suffering.