Before the Magic Happens 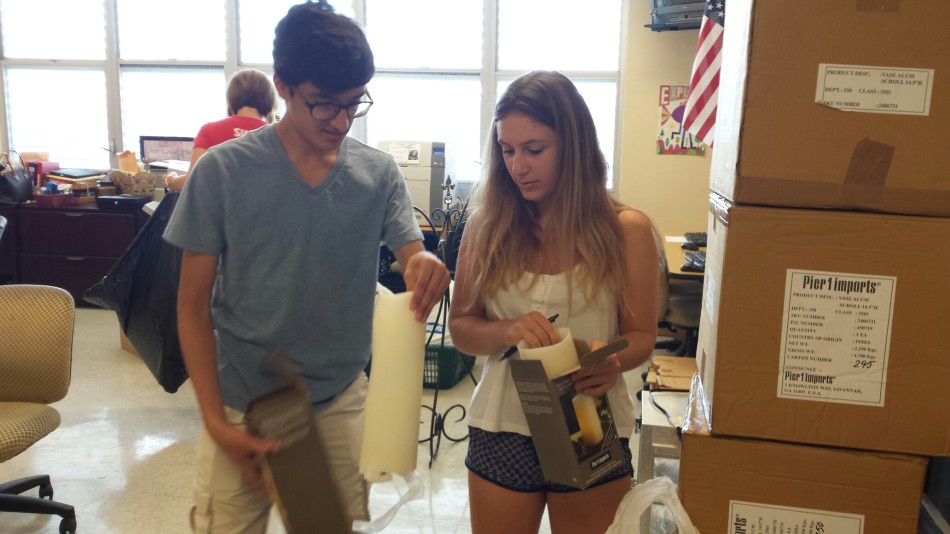 As we enjoyed our long weekend, the junior board spent theirs sorting this year's prom arrangements.

Center pieces are aligned and decorations are propped about- everything is set in place with an almost enchanted feeling. The highly regarded high school dance: prom, stands out for its elaborated detailing. From the prom tickets to the dance floor’s playlist, everything is planned out with an enormous amount of work. Over the course of the entire school year, the planning process occurs for that one unforgettable night to take place.

To comprehend how big of a job planning prom can be, let’s remember that it starts a whole year before the event. During the summer, brainstorming occurs to determine exactly what is wanted. From the venue to the lighting, all the basic components are discussed. Reflecting on last year’s prom helps figure out what changes need to be made and what should be kept the same. Even with an entire year to plan, errors occur, and sometimes those errors are larger than others. Originally, prom was to be held on May 2, but on April 23, 2014, it was announced that prom was being moved to May 3.

As the date gets closer, handling the preparations gets a little more hectic. Extraneous amounts of legal paperwork has to be sorted out for everything to function smoothly. Misha’s Cupcakes, a popular cupcake bakery in Coral Gables, is required a waiver just so their desserts can be served at prom. Another thorough process is the designing, printing and selling of prom tickets. The junior board creates the ticket’s design, and upon approval from Mrs. Suarez, is sent to the printing company where Mr.Wisser’s dad works.  The juniors also handle the selling of the tickets, which this year included the online voting table, so that when they were done buying their tickets they could vote for prom king and queen. Five seniors, along with their class sponsor Mrs. Monzon and junior class officer Jose Balcazar, attended a food tasting last week to decide the night’s menu. Samples of everything from the salads to side dishes were given to be vote on as the best– which was usually decided in unison.

“At the food tasting every twenty minutes or so, the waitress would come out with 3-4 plates for us to try and usually we would have to pick 2-3 of them that would make the cut.  I’m extremely excited for prom; there’s a different feel to it this year for me since I have attended the last two, so for it to be my own is something I look forward to. I’m really looking forward to the food this year because all the plates were flavorful and zesty. It’s going to be a great evening-food and all, ” senior Melissa Perez said.

While the attendees worry about their outfits and hair, the day of the event is more stressful for those who are setting up. Early in the morning, the junior board members set up the ballroom following a floor plan created by 2008 alumnus Lili Aquino. The room across from where prom will be held is being used to arrange centerpieces and hold decorations, which can make the back-and-forth franticness a bit easier. After prom, tables must be cleared, centerpieces have to be packed up, and weary juniors get to go home.

“I have been helping since my freshman year of highschool. I remember sewing magic carpets in Ayleen[Big Monzon]’s room for the Arabian Night prom for the Class of 2005. Suarez is like family, whenever she needs help I’m there. Besides, I love planning events and making centerpieces! Designing the floor plan depends on the venue we use and it’s pretty standard. For the centerpieces, we usually do three variations: short, medium, and tall. For this prom, Suarez found gorgeous silver vases and we went from there. I have an all time favorite prom: the Cirque Prom of 2006. My fingers were purple from the balloon centerpieces! I absolutely enjoy the planning process for prom, especially since it’s for Gables — it makes me feel like I’m back in high school,” 2008 alumnus Lili Aquino said.

This year’s prom is spiced up with a few changes, which includes adding a photo booth. The DJ is going to be given a playlist the senior class would like to hear, so that the music is more accurate and enjoyable. The biggest change, however, is that there’s no definite theme this year. The decorations and feel of prom will be leaning towards “enchanted garden”, but nothing is set in stone.

“Not having a theme this year isn’t really an inconvenience, since it makes finding a dress easier, but I would’ve liked a theme in terms of decorations. As long as I have fun at prom, I’ll be happy,” senior Monica Moreno said.

Prom might be a night to remember for its attendees, but to those who pitched in or worked laboriously throughout the year, the event is larger than the actual night itself. As the senior class enjoys one of the last milestones of their high school lives, hopefully they’ll appreciate the hard work that went into it.