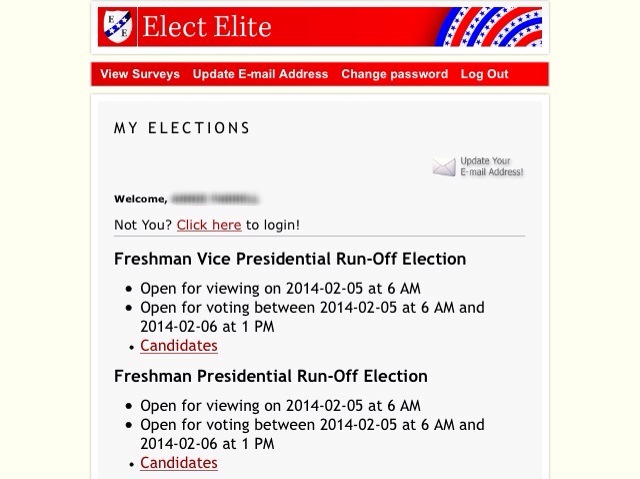 Recently, the shocking results of the student government elections for the 2014-2015 school year were announced. Most of the candidates were able to sigh in relief as decisions that were made at the end of an intense election. While some positions remained unopposed, others saw tough competition; the presidential and vice presidential candidates running for the sophomore class positions were not lucky enough to be granted this peace of mind. There was a tie for both of these class officer spots and they would have to participate in a runoff.

“It was a solid tie for both positions,” student activities director, Ms.Suarez, said.

In order to break this tie, the runoff election began. The runoff was held on voting.electelite.com from Wednesday, February 5th to Thursday, February 6th. All Gables freshmen had the chance to vote, just as before. The candidates for sophomore class president were Jonathan De Armas and Holden Payne. Meanwhile, the contenders for vice president included Albany Muria and Sydney Scanlon.

A total of only 110 freshmen voted in the first election. The runoff candidates made it a point to be proactive, going around and getting as many people to vote as possible; some even offered their electronic devices to freshmen to increase the number of people voting.

“My advice to the people that had to campaign for the runoff was to go speak to freshmen classes in person. Candidates need to move beyond their friends, they need to reach the voters they don’t know,” freshmen class sponsor, Mrs.Noval, said.

The winners of the runoff were announced Thursday, February 6th. The results declared that Holden Payne and Albany Muria will be the president and vice president of next year’s sophomore class.

“I’m really excited to have the chance to represent my class again, and I hope to incorporate as many activities as possible and get students really involved in the school,” new sophomore class president, Holden Payne, said.

All student government positions are highly reputable since they each hold important and valuable positions. In order to hold one of these spots, a student has to be extremely dedicated and willing to speak up for their classmates. While they may hold different positions, they all work together to achieve their goals. The officers organize activities for their class such as treat days, class trips and much more to make the school year a little more bearable and memorable.

“I plan to coordinate the best treat days and field trips so I can help make the Class of 2017’s sophomore year a groovy one,” newly inducted sophomore class social media specialist, Julian Elortegui, said.

This competent new board has instilled confidence in the Class of 2017 that their sophomore year will be made the best that it can possibly be.

Below is the list of the freshly filled sophomore Class of 2017 officer positions for the 2014-2015 school year:

Secretary of the Treasury: Maxwell Schoenblatt