Cav Crash: A Night of Talents 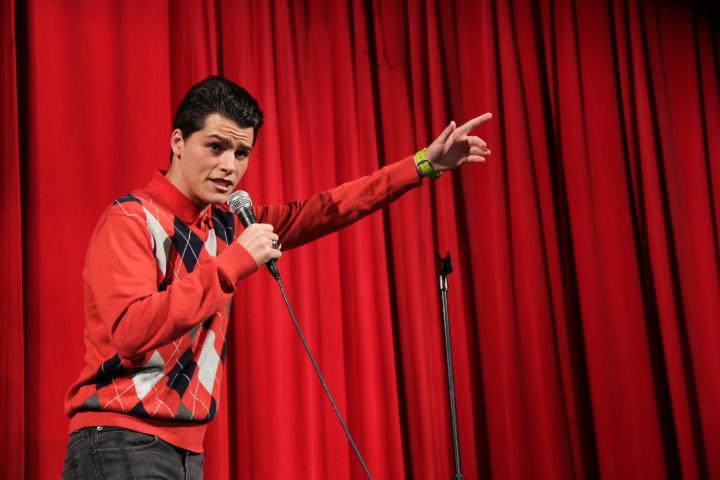 On Monday, Sept. 22, students, family and friends all gathered in the school auditorium to soak in the spirit and talent of Gables. After all of the rehearsals and dedication the participants put in, it was impossible for them not to be excited to get on stage. There were singing and dancing performances from the Sisters with Attitude (S.W.A.), the Gablettes and several class representatives. Almost all of the rows in the auditorium were filled to see the various skills Gables students have to offer.

At the start of the night, the crowd was brought to tears by an angelic voice in an acoustic guitar act. Then everyone was overcome with laughter after the stand up comedy act. A few students from our very own baseball team even danced to some widely known songs.

Melvin Taylor won the talent portion of the show. He danced to his own mix of songs, putting a unique spin on his performance. His name echoed through the large auditorium as the crowd chanted his name once he was revealed as the winner of the show.

Besides the talent portion of the show, there were a few other performances and appearances. There were performances by S.W.A., the Gablettes, and our cheerleading squad. Our very own Gables Football team made an appearance on stage to announce the change in time and location of the homecoming game (Tropical Park at 3:30 pm). To incorporate even more school spirit into the show, each club had a representative strut on stage in a spirited costume. Awards were given to Gables Earth for the most creative costume and to Tri-M for the most spirited.

“It was great! I loved being in the club spirit parade because I was able to show people what my club is all about. Mark Braun and I were also in charge of the sophomore class skit. After eight hours of video editing, we knew it was ready to be shown to the crowd. I mostly enjoyed viewing all of the talent Gables had to offer. There were performances by students I had never even met, so while the amount of talent was a bit unexpected, it was still a really cool experience,” sophomore Julian Elortegui said.

It was finally time for each class to show the audience what they were made of. Sophomores, juniors and seniors created skits, or videos, to show off their creativity. The junior class won after performing a skit that included a spoof on a few popular songs, a mockery of star Kanye West, and a humorous display of the senior class. While the seniors did a spoof on High School Musical Three, the sophomore class played a video. Starring sophomores Mark Braun and Julian Elortegui, the video was a news broadcast asking fellow students how they think the homecoming game will turn out.

“I think that Cav Crash is a fun activity for students to go and watch our peers perform and show their school spirit! I went my freshman year and I still love it just as much,” senior Ali Band said.

This year’s Cav Crash included nothing other than singing, dancing and even a stand up comedy act. Although it was Ms. Zaldivar’s first year in charge of Cav Crash, the event was considered very successful. The crowd and the performers shared their Gables pride and spirit together. With all of the talent hidden in the halls of Gables, next year’s Cav Crash is destined to be a grand success once again.