As the first agreement between Israel and an Arab state since 1994, the Abraham Accords have set the stage for new diplomatic and economic ties between Israel, the UAE, the USA and Bahrain 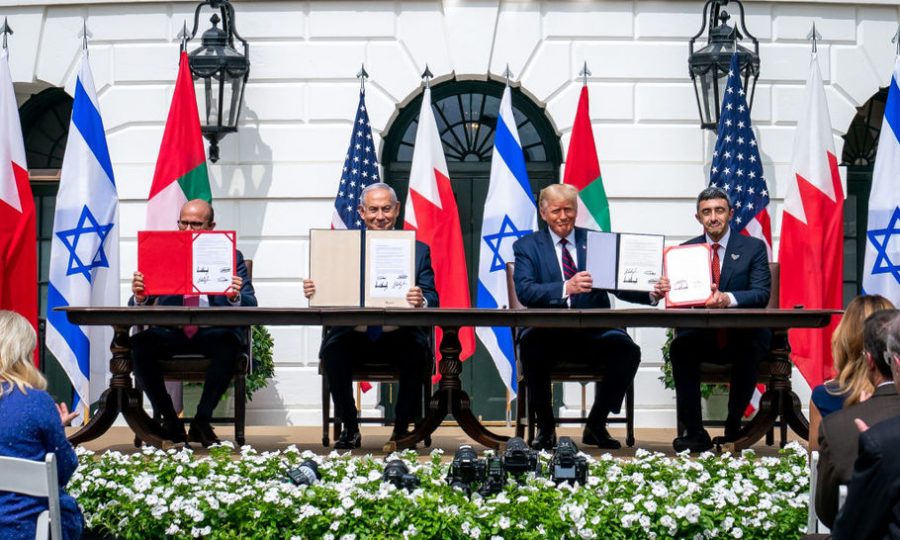 World leaders from Israel, the United Arab Emirates, the United States and Bahrain came together and signed the Abraham Accords.

On Sept. 15, Israel, the United Arab Emirates (UAE), Bahrain and the United States signed a deal focusing on how these countries can work peacefully together. As the first agreement between Israel and an Arab state since 1994, the agreements signed, known as the Abraham Accords, established new diplomatic and economic ties between the three countries.

The Abraham Accords specifically aim to benefit each country economically and socially, such as opening more embassies and more focus toward tourism and technology. For example, the COVID-19 pandemic has taken a toll on the UAE, in addition to the slow economic growth beforehand. The gross domestic product in the UAE expanded by 1.6% in the last quarter of 2019, according to tradingeconomics.com, which is expected to increase as a result of the signing of the accords.

However, taking into account promises listed in the treaty, this number is likely to grow. Additionally, air traffic will be open between the Arab countries and will facilitate the exchange of information through advertisement spots. The treaty is being seen as a step forward in the journey to forming an alliance against Israel and Sunni Arab monarchies, Iran.

The orchestration of the event was led by Jared Kushner, President Donald J. Trump’s son-in-law and senior advisor, on the American front. He has focused a large part of his career in the White House on Middle Eastern Peace. Within his focus, Kushner concentrated on Israeli relations with other countries.

Although the peace treaty aims to strengthen the connections between Israel, the UAE and Bahrain, there have been disagreements regarding Palestine’s role in the Abraham Accords. As a result, Palestinian forces launched military rockets from the Gaza Strip to Israel during the ceremony that took place in Washington D.C. on Sept. 15.

“Because there has already been alliances between these countries, both under and over the radar, I do not believe it will make much of a difference. I do hope that this will be a different circumstance where the incentives will cause needed change,” junior Jana Faour said.

Regarding the future, President Trump has alluded that if re-elected he would enforce negotiations with Iran, who has avoided speaking with the United States since 2015 when Trump pulled out of the nuclear deal previously organized by the Obama administration. Additionally, the president has commented that other countries will soon join the treaty in upcoming years.

This treaty implies that it would move the relationship between the Arab nations forward, even though how those relations would include Palestine have not been addressed. For both the UAE and Bahrain, the agreements open up the possibility of purchasing Israel’s advanced technologies, along with cooperation on economics, health and tourism.