College athletes are treated with the same regard as the pros. It's time for them to get paid accordingly. 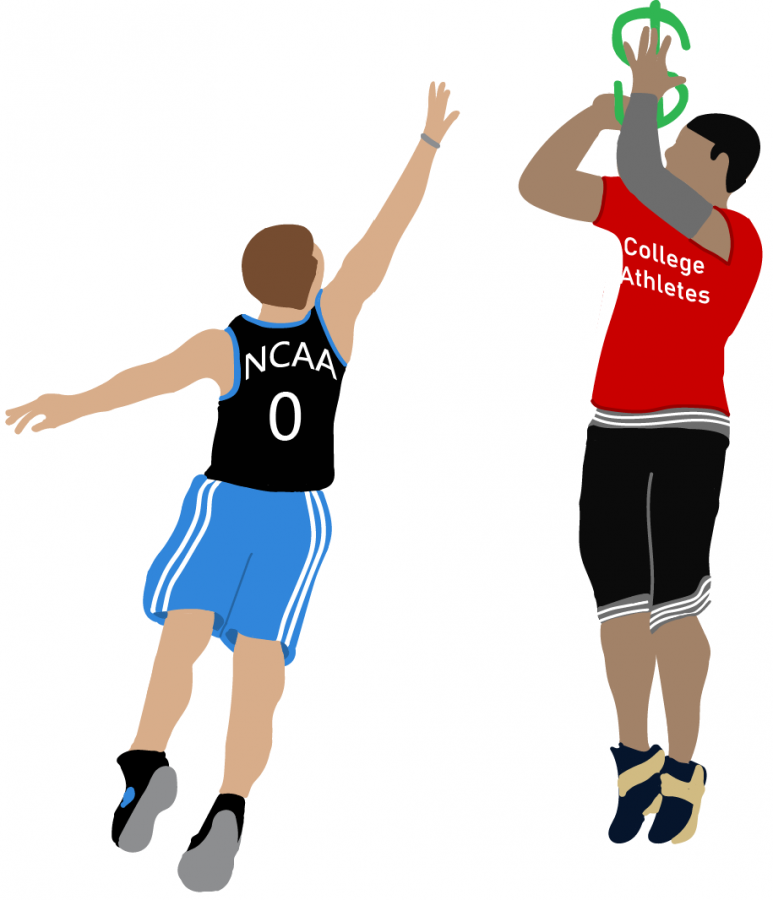 College sports hosts some of the nation’s most viewed events, often surpassing the viewership numbers of professional leagues. For this reason, colleges generate a lot of revenue from athletic events. Despite these earnings, the players — whose performances are critical to garnering viewership from fans — are prevented by law from being paid a salary. Their talent compares to that of professional athletes, which is what the best players will eventually become. Especially during these uncertain times under COVID-19 when everyone has been in some way affected, players must be compensated for their effort.

Many professional athletes begin playing sports at very young ages and dedicate numerous hours towards bettering their crafts. For example, Los Angeles Lakers center Lebron James began playing basketball at the age of 9. This benefited James greatly, as it opened up more opportunities for him in the future, including being drafted directly from high school into the National Basketball Association (NBA).

For many college athletes in general, beginning to play their chosen sports in their early childhood helps facilitate the process of early scouting and building their dossiers. They often join competitive sports teams where they can further advance their skills and learn valuable lessons from their peers. Most importantly, a high school athlete’s performance in their dedicated sport eventually dictates what college they will attend, where they can then try to get full-ride athletic scholarships, which can pay for the total cost of college.

However, while these scholarships are the ultimate goal and the path towards playing at the professional level, very few students will be able to achieve this. According to NCSAsports, fewer than 2% of student athletes nation-wide get athletic scholarships.  On the other side of the spectrum, the other 98% of college athletes pay full tuition while balancing their responsibilities as a student and a player. This struggle can cause students to take loans and incur debt, which becomes a heavy burden for them later in life if they are unable to pay it off. A fixed salary would give student athletes a way to support themselves during school, rather than needing to find jobs, which would add more stress and responsibility.

“The advantage of paying college athletes is very straightforward. Not only will they be accustomed to professional life, if they even reach that level, but it will also teach them about time management, savings and finances, crucial aspects of everyday life,” soccer player Pierre Couto said.

According to ESPN, college games garner large crowds and television attention, with major games like football playoffs getting the attention of over 20 million people nation-wide. Events such as football playoffs or March Madness further generate commotion on all social media platforms.  Additionally, numerous college stadiums have more seats than professional teams, with some numbers going as high as 100,000 seats. Merchandise, such as jerseys and flags, are constantly promoted through sales on and off the playing field. This would allow fans to represent and support their favorite teams. With such high amounts of popularity, it is certain that schools profit from this lucrative system, taking advantage of their own players.

“Paying because they are making money for the school and increasing school pride. They are doing a favor for the school as well, and when you add more expectation to their already packed daily lives, it is a lot on them,” girls junior varsity coach Mykaya Kelly said.

Although football and basketball usually take the limelight, less popular sports such as hockey and golf still give students paths to a career in pro sports. While they generate much less revenue, public attention is still present. No matter the viewership, athletes in lower levels of play still work just as hard and deserve to be paid some sort of revenue from the school for their efforts.

According to rules made by the National Collegiate Athletic Association (NCAA), athletes should be treated the same as non-athletic students and are therefore not allowed to be directly paid by their school based on their likeness, along with  endorsement deals. Currently, the NCAA has agreed to reverse these rules once all three divisions of sports at the college level agree on an alternate set of rules.

Others may argue that paying students could distract them from the game, making them more focused on making profit rather than improving their talents. A possible solution would be by not giving players excessive amounts of money and tying the pay to performance, that way players would need to earn their keep. However, the earnings made off of their likeness should be limited, as certain sports lack popularity, making the players almost unrecognizable. They could also be taxed accordingly. A California Law, the Fair Play to Play Act, prohibits the NCAA from punishing players who are paid based on their likeness or endorsements.

Well-known public figures have spoken out in support of student payment, most notably LeBron James and Bernie Sanders, saying that student athletes are workers and should be compensated as such. Paying the athletes would allow them to work on the game full time all the while keeping schools from taking advantage of their athletes.

With the combined revenue from events, and the burden of student debt, now more than ever should college athletes get paid for their work.