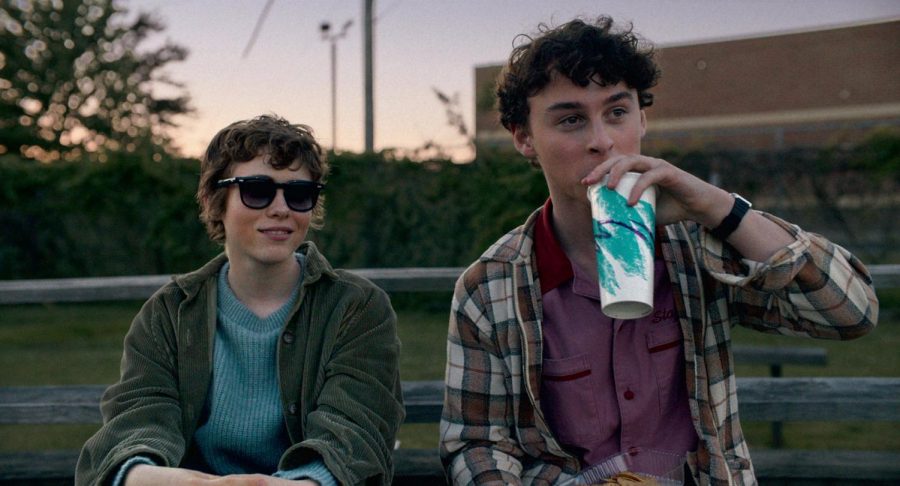 Featured above is Sydney Novak, played by Sophia Lillis, sitting next to Stanley Barber, played by Wyatt Oleff, watching one of their schools’ football game.

Not Okay With This Quarantine? Binge this show

I'm Not Okay With This, a Netflix original series, showcases a dark 21st century spin on the classic coming of age story

The new Netflix series, titled I’m Not Okay With This, made its debut this year, which follows a troubled teenage girl with newfound supernatural abilities. Sydney Novak, played by Sophia Lillis, has a rocky home life that results in uncontrollable rage. This leads to her discovery of telepathic abilities that allow her to move objects and cause harm to other people when she is upset, something she was unaware of before. With the help of fellow high school outcast Stanley Barber, portrayed by Wyatt Oleff, Sydney begins training with him to control her abilities.

The show has the teen movie elements of a film like Heathers, being a bit morbid, yet still laughable at times. Sophia Lillis has become a 21st century Molly Ringwald starring in a few large, memorable roles and sporting a ginger pixie cut. The show’s underground indie soundtrack, startling cliff hanger and themes make I’m Not Okay With This easily one of the better teenage-oriented Netflix originals.

The series covers several coming of age themes, such as dealing with issues in one’s family. Showing the rollercoaster of emotions that can stem from the inexplicable loss of a parent and having an unstable relationship with the other represents a serious reality for some young people. Instead of only focusing on issues at school, this series portrays the dynamics of a mother daughter-relationship that struggles because of the lack of understanding on both parts. The show presents the reality of living with a single mom and having to take care of siblings and the household. The show does an excellent job of tackling heavyhearted themes in a respectful and relatable manner.

As Sydney finds out about her super powers she is led deeper into a state of anxiety and exasperation, dramatizing the feelings of ostracism which many young people struggle with. As her powers grow, her life also becomes more and more difficult. Dealing with inner turmoil and overall pain she leans on Stanley as support and guidance. As the pair began hanging out they realized that both of their lives are similarly complicated, and the weird kid from down the street became one her biggest confidants. Although at first apprehensive about opening up to Stanley, in the end she was grateful that she did. The dynamic is relatable as many people may have at least one person who turned out to be a more prominent figure in their life than they previously expected.

I’m Not Okay With This also sheds light on various experiences that many teenagers have through the perspective of a young person, such as showing a lighter side of being a part of the LGBT+ community. Through the show the wholesome crush Sydney has formed on her best friend Dina, played by Sofia Bryant, is described in dialogue the same way a heterosexual love interest would have. Descriptions of the emotions Sydney felt for Dina were told in terms of butterflies and pure admiration, instead of being introduced as angsty and something Sydney wished to avoid. It also showcased the fear of rejection which LGBT+ youth often face from both their crush and community as a whole, as Sydney grapples with her fear of coming out.  Sydney shoves her feelings for her best friend down to the point where it was hurting her mental state until an unfortunate event pushes her sexuality into the open before she was ready. This show provides positive representation and relatable content for LGBT+ adolescents which is key in making them feel more allied and interconnected with the media presented to them, seeing shows after shows that solely add in LGBT+ characters for added drama are harmful.

“It is a great show especially in today’s social and political climate it is so important to represent different communities,” sophomore Nina Wallen said.

Overall, this series does serious issues justice by creating a believable atmosphere for them. Tough topics such as the struggles of living as a lesbian teenager in a broken home are accurately depicted while additional comic relief lightens the show. The supernatural aspects are interestingly developed since Sydney discovers them first during the first episode. I’m Not Okay With This puts an interesting spin on a modern coming of age story.