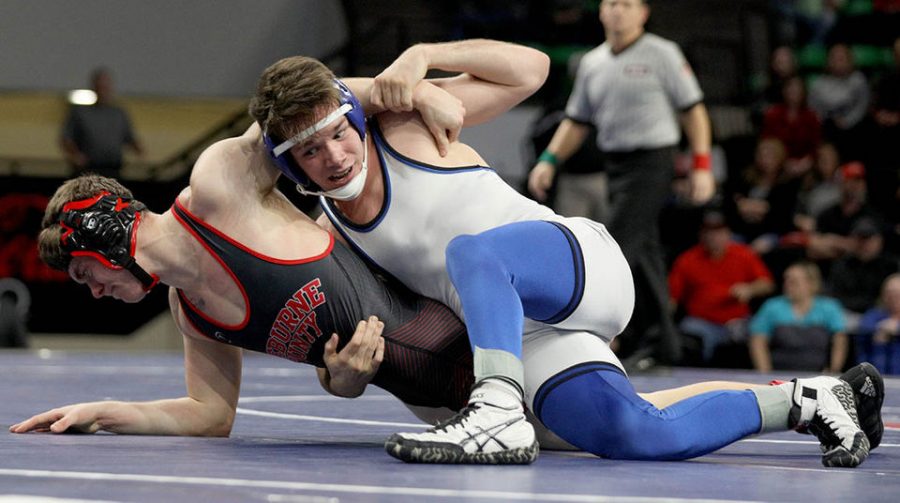 Wrestling the weight off

Wrestling is a sport in which athletes have to learn to maintain a balanced diet, because of their lack of time management wrestlers often find themselves trying to achieve significant weight loss in only a few days.

It is a well-established fact that the sport of wrestling requires a rigorous diet plan. Wrestlers are under constantly worry about their weight, which then leads to very restricted meal intakes and unhealthy amounts of exercise. What often goes unnoticed though is that all these negative habits are detrimental to both their mental and physical health. Athletes often ignore symptoms of dizziness, fatigue and headaches in order to continue training, an example being Jeff Reese, a member of the Wolverines wrestling team at Elmira High School in New York. According to the New York Times on Dec. 9, 1997, Reese passed away after attempting to rapidly shed 17 pounds in order to qualify in the 150-pound weight class he lost his life due to kidney failure and a heart malfunction while wearing a rubber suit and exercising in a room heated to 92 degrees.

Fasting and limiting water intake in order to drop weight before a match are practices which coaches have long disapproved of, but have accepted as part of the game. The pressure on these young wrestlers to lose a specified amount of weight before a competition often drives them to unhealthy weight loss methods in order to qualify for a specific weight class. According to the Center for Disease Control and Prevention, a healthy weight loss is about one to two pounds a week, yet most wrestlers do not follow this gradual approach because of the fact that they are often required to lose more weight than the suggested amount. In order to achieve these weight goals, they begin restricting their food portions or skipping meals, and by depriving their bodies of said nutrition, their athletic performance is negatively impacted.

“Some wrestlers are not committed to the process, they do not maintain their body weight and then when the tournament comes they are running and spinning in order to drop six pounds in 24 hours, ” Athletic Director Louis Romero said.

The National Collegiate Athletic Association (NCAA) recognized the problem at hand and began to implement rules which eventually trickled down to the high school level. Changes made include banning the use of rubber suits, diuretics and saunas both on and off campus. Schools were also required to establish which weight class the student would compete in for the whole season and the established class had to be within the limits placed on the amount of weight that could be lost per week. One of the biggest changes made by the NCAA is the hydration test, given that athletes tend to deprive themselves of water in order to decrease water weight which could lead to more serious health issues.

“Now there is a hydration process where wrestlers have to go to the trainer in order to make sure they have a certain amount of body fat. This test gives both coaches and athletes an estimated time or a way to eat in order to meet a goal weight for the match,” Wrestling Coach Thomas Hardy said.

Extreme weight loss is not only harmful to one’s physical state but it can also have negative impacts on an athlete’s mental health. When losing weight in a healthy manner, the side effects are normally positive; but when wrestlers push their bodies beyond the limit, they tend to suffer psychological effects. Depression is the most common detrimental consequence, due to the fact that there is a direct correlation between poor body image and depression. Anxiety and stress are also negative side effects because losing weight affects hormone levels. When weight is lost at a faster pace than normal, an extreme hormonal imbalance may occur. This lack of stability can lead to mood swings and difficulty concentrating.

Instead of trying to cut weight so rapidly, athletes should schedule ahead and come up with a workout and meal plan that allows them to build muscle and minimize excess body fat while also losing weight gradually as the season approaches. In the event that weight does have to be lost at a faster rate than normal, it is suggested that athletes pay attention to their bodies. Extreme measures like spitting and wearing plastic suits should not be used; instead, athletes should drink water and eat smaller, more frequent meals in order to avoid feeling sick or light-headed.

Wrestling is a sport that fosters physical fitness in student athletes, yet students must be provided with information as to how to effectively and safely manage their weight loss. With more information on the topic, wrestlers will not only be more successful, but they will also benefit from more healthy lifestyles choices.