Lissette Calderon Marks Her Name in the Gables Hall of Fame 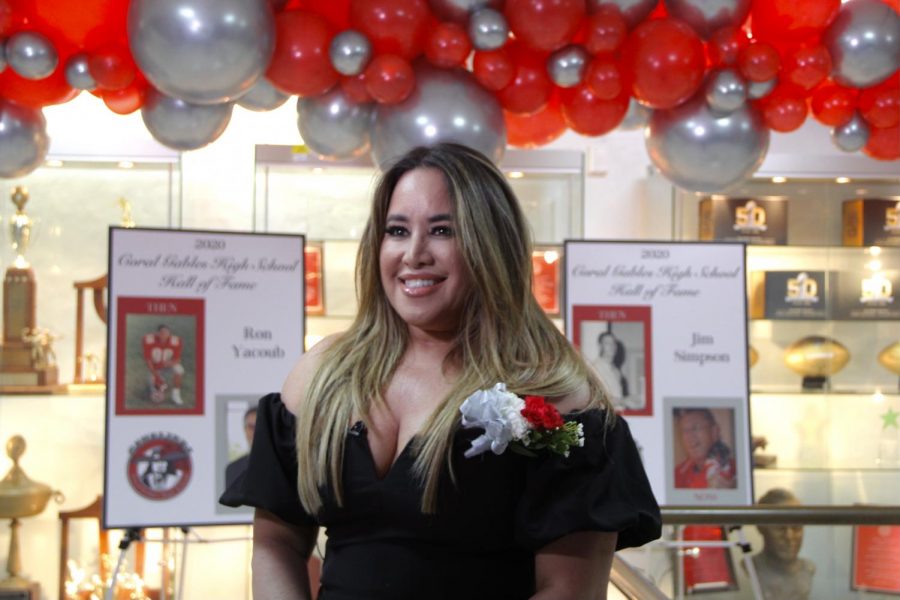 Gables alumnus Lissette Calderon returned to her alma mater to be inducted into the Cavalier Hall of Fame.

Lissette Calderon first entered the halls of Coral Gables Senior High as a timid sophomore who knew only a single student. Now, as an accomplished real estate developer for Neology Life and a philanthropist through Amigos for Kids and the Sundari Foundation, she reflects on her years at Gables as some of the most formative for her current success. On Friday, Nov. 5, she returned to her alma mater to be inducted into the Gables Hall of Fame.

Calderon’s high school experience was not one that could be characterized as “easy”. Her grandmother was a maid at the Sheraton Hotel, and her parents were unable to pursue education beyond their high school graduation. Furthermore, Calderon’s father sadly passed away in an accident during her senior year at Gables.

Despite the obstacles and the tragedies she experienced, Calderon was able to persevere as a student with the help of Gables’ dedicated faculty and staff. Her fellow Hall of Fame inductee, Jim Simpson, made a major impact on Calderon as he was the activities director while she was a Cavalier.

“He was a mentor, he inspired me and he was a second father to me. He believed in me long before I believed in myself,” Lissette Calderon said.

Once she became more comfortable within the Cavalier atmosphere, Calderon found a home at Gables. She recalls going to every pep rally, pointing at the alma mater, watching clubs compete and more. Always filled with Gables pride, Calderon made it her mission to attend every football game, even attending district matches. She represented the student body as Senior Class President and won Prom Queen. She graduated from the International Baccalaureate program in 1992.

“I’ve always believed in defying convention…So when they said that a woman couldn’t be a real estate developer it made me want to do it all the more. I’ve always loved real estate, it’s always been my passion and being able to take an abstract dream and make it into a concrete reality is the ultimate in creativity,” Lissette Calderon said.

Calderon believes in leaving the world a better place than how one finds it. As founder of Neology Life, the largest female-led development company in Florida, she has revitalized the Miami River waterfront area to do exactly that. She emphasizes bringing the Miami Riverwalk to fruition, opening parks and looking into streetscapes, lighting and safety.

Calderon now has more than 1500 developed units and works 100-hour workweeks to realize her visions. Recently, she was able to secure a $52 million loan to refinance a Miami rental tower.

“We work to bring attainable housing to people at a price point they can afford…We also look not just to create buildings but to create lifestyles and impact the entire community, so we work with the public sector,” Lissette Calderon said.

The Gables graduate also gives back to her community with her involvement in several nonprofits that aid the community. She has sat on the board of Amigos for Kids, an organization that brings works to prevent child abuse, for almost 20 years. Similarly, with the Sundari Foundation, she helps provide resources and shelter to disadvantaged and homeless women, youth and children within Miami.

“I believe that you can change the world by changing the trajectory of a child’s life…We are looking to create a meaningful impact on the lives of the next generation,” Lissette Calderon said.

With her years of experience, prosperity and surpassing of the many expectations set upon her, Calderon has her fair share of wisdom to pass on to current Cavaliers. She hopes to impart on Gables students the idea that failure is necessary and should not be feared. She also urges students to always be good people, but still have fun at the end of the day.

As the only woman and the only Hispanic being inducted in this Hall of Fame induction ceremony, Calderon also hopes to inspire people that look like her or speak with an accent similar to hers. She aims to serve as an example of how, with hard work and a Gables education, anything can be achieved.

“Someone told me once not to bite off more than I can chew, and I said ‘I’d rather choke on greatness than nibble on mediocrity,’” Lissette Calderon said.