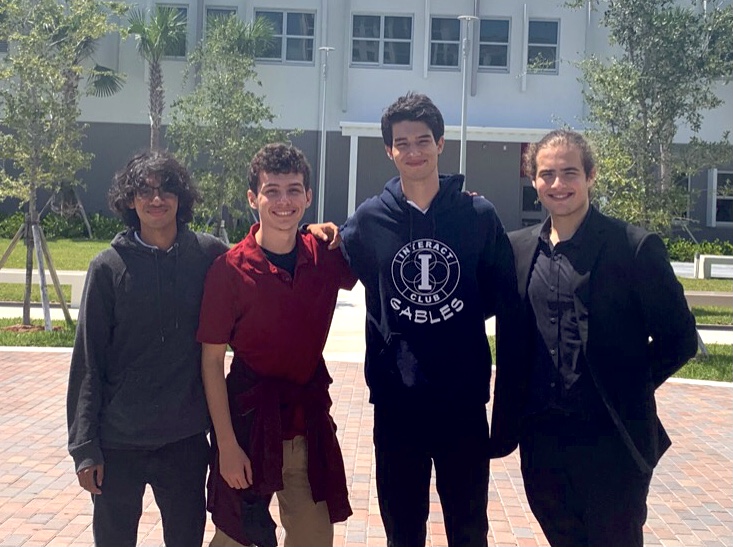 Seniors and juniors across the United States participate in the National Merit Scholarship Program, a non-profit organization that recognizes students’ achievements and aids in college undergraduate scholarships. On Sept. 15, 2021 the news arrived at Coral Gables Senior High that four of Gables’ students qualified as semifinalists for the academic competition.

As indicated by the competition standards, Gabriel Wagner, Julian Mesa, Bernardo Andrade and Jared O’Sullivan achieved some of the highest Standardized Assessment Test scores in the state of Florida. These four students have now joined the select group of 15,000 semifinalists and gained the opportunity to join the even smaller group of 7,500 winners.

Senior Gabriel Wagner
When he is not cruising around in his Subaru, you can find Gabriel Wagner, or as his friends like to call him, “Gabe” putting his video editing skills to work for CavsTV or creating robotic hands in his bedroom. Wagner is no stranger to hard work as a senior in the International Baccalaureate Program at Gables and becoming a semifinalist in the National Merit Scholarship Program exemplifies Wagner’s determination on his path towards academic success.

“After becoming a semifinalist, many of my friends and family congratulated me, and I think that was the most motivating aspect about this experience and achievement,” senior Gabriel Wagner said.

For Wagner, the award strengthens his college resumé and his hopes of attending his first-choice university, the University of Florida, as he strives to obtain the financial rewards of the program’s later stages.

“Representing Gables means that I can prove that my time with my best friends and favorite teachers made me the strongest student I could be,” senior Gabriel Wagner said.

Julian Mesa is a member of the Gables community as well as a dedicated member of the National Honor Society, International Baccalaureate Honor society and the president of Future Business Leaders of America.

In addition to these extracurriculars, Mesa dedicated time to study to obtain an SAT score that would secure him a chance at progressing far in the scholarship program. Mesa’s efforts have paid off as he now has the possibility of winning a sponsored scholarship from his top choice school, The University of Miami where he hopes to study finance. His current success supports his ambitions of attending UM while saving as much money as possible and graduating debt-free.

“It is an honor to be a representative for Gables in this competition and I am eager to pursue the opportunity to reach even further and strengthen my representation of the school that has helped me become the student I am today,” senior Julian Mesa said.

Senior Bernardo Andrade
Although he moved to the United States only two years ago from Brazil, Bernardo Andrade is deeply involved in his community as a board member of the math club and Interact club at Gables as well as a dedicated member of his local church where he helps conduct virtual masses. The obstacles Andrade has faced after moving to a new country have not dampened his academic ambitions.

After being advised by Ms.Driver, the college advisor, Andrade submitted his SAT score to the National Merit Scholarship program and was happy to hear of his semifinal status. For Andrade, reaching the semifinals of the program has improved his confidence and his trust in himself as a student.

“Reaching the semifinals has made me more confident in myself and motivated me to pursue other scholarships,” senior Bernardo Andrade said.

Andrade is striving to obtain the scholarships matched with the schools of his choice such as Penn State University, Georgia Institute of Technology and Duke University as he hopes to study civil engineering.

Senior Jared O’Sullivan
Although Jared O’Sullivan’s time at Gables has been short, transferring to the school in his senior year, he has made himself known among Gables’ 3000 students. During his free time, he enjoys playing video games, going for drives and travelling around the world exploring different cultures. In addition to these hobbies, O’Sullivan shines as an exemplary student whose results speak for his hard work and dedication.

O’Sullivan was not even aware that he had submitted his Scholastic Aptitude Test score to the National Merit Scholarship Program and was shocked upon receiving the news of his semifinalist position. However, after accidentally becoming a semifinalist, O’Sullivan has savored his unexpected success and is using the opportunity to progress his academic career.

“The semifinalist status gives me a better opportunity to attend one of my top school choices if I reach the finals, so I am extra motivated and dedicated to progress further,” senior Jared O’Sullivan said.

The potential scholarship presents O’Sullivan the opportunity to obtain $30,000 per year from one of his top university choices, Northeastern University, if he is able to become a finalist. This strengthens O’Sullivan’s ambitions of studying engineering at his top choice schools and relieves some of the stress experienced by many prospective college students struggling to determine where they will attend college.

Although these four students are very different from one another, their time as Cavaliers, whether long or short, has presented them with the opportunity to earn a nationally recognized scholarship. They each have their own hopes and ambitions for the future but share the fact that their process has been streamlined and advanced by their academic achievements as Gables students.