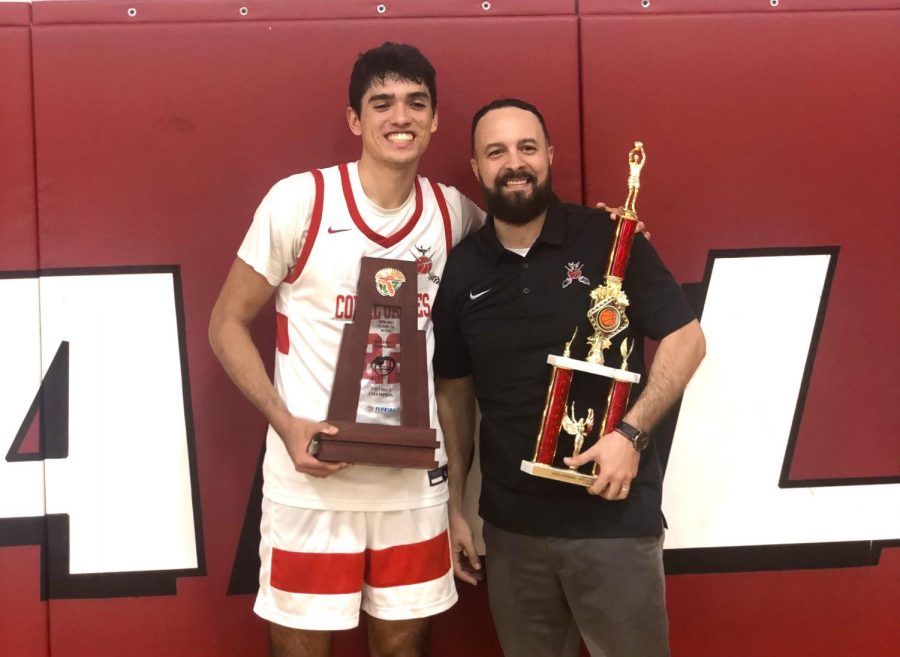 Mr. Govea stands with one of his star players as they hold up the district state champions trophy.

In saying goodbye to Coral Gables Senior High’s basketball coach and history teacher, Mr. Govea, it is crucial to look at the legacy he will be leaving behind. Having worked at Gables for five years, the educator has touched the minds of many students in the classroom and on the court. Mr. Govea will cherish the unforgettable memories created with his students and team, from hundreds of lessons to state championships.

Mixing students’ interests with the subjects he taught, Mr. Govea was able to connect deeply with his classes. Lessons are sometimes difficult for students to relate to, especially in a subject like history, where ancient civilizations and archaic governments are the focus. His teaching resonated with his students as they learned not only about world history but also about the world around them.

Reflecting on his years at Gables, Mr. Govea cherishes his time teaching as his students were his “biggest joy of going to work and they will all be missed.” On top of being a world history teacher since 2016, he also coached the Cavaliers boys basketball team throughout the COVID-19 pandemic. He will never forget this year’s team as he watched his players grow not just from freshman to senior year, but also develop from boys to men.

“I will never forget this year’s team. We witnessed our team-organized player-only workouts in parks during the COVID-19 pandemic [and] then watched it all come to fruition during the season,” Mr. Govea said.

When his son was born two weeks into the basketball season, Mr. Govea had a “heart-to-heart talk” with the team to educate them on his concerns about the pandemic and what it meant for him and his new family at home. His team quelled any doubts and concerns that arose due to the threat of the virus and they gave him the “confidence to continue.”

“As we close the year, I just want to thank him for three special years here being my coach in basketball and on the side volleyball too. I know he will do great things wherever he is in the future and he will always be my coach for life,” junior Romulo Delgado said.

Even a COVID-19 exposure controversy did not hold Mr. Govea’s team back. At the time, the Cavalier basketball team had a bump in the road to participate in the Florida state championships. The Gables basketball team was barred from competing as they had played Christopher Columbus High School several days prior, and a player on that team had tested positive for COVID-19.

Although every team member and coach on the Gables team had tested negative, because of their exposure to the virus, they were barred from playing. However, through a social media and press movement, Mr. Govea’s team was able to garner enough support to overturn the district’s decision and compete. They had worked hard to get to the championships and were determined to reclaim their chance at winning the championship.

Although Mr. Govea’s time at Gables has come to an end, he looks highly upon his time spent coaching and teaching at the school. He will be missed by his students and the players on the basketball team. Mr. Govea’s student-athletes are grateful to have been able to win the district championship with him and overcome COVID-19 obstacles together. Navigating such difficult times as a coach and teacher, he has left an imprint on Gables.

“It was beautiful and memorable to watch these determined student-athletes play for more than just a game during these frustrating and chaotic times. I will never forget you,” Mr. Govea said.