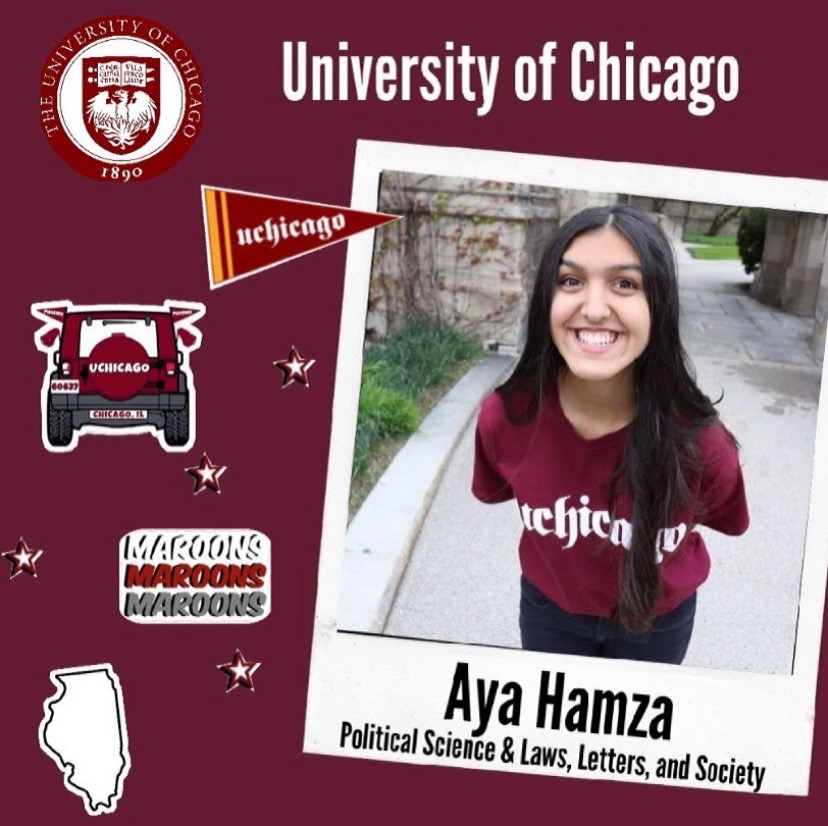 Hamza is already showing her Phoenix pride with her maroon UChicago t-shirt.

Despite these odds, Cavalier Aya Hamza applied through regular decision and was accepted into the prestigious university. After accepting the school’s offer, Hamza plans to attend UChicago this fall.

“I chose to apply through regular decision because I personally did not want to lock myself into a given contract for financial reasons. Plus it allowed me the freedom to choose between schools,” senior Aya Hamza said.

At Coral Gables Senior High, Hamza is highly involved in the numerous extracurriculars the school has to offer. She is co-president of the Political Activism and Civic Engagement club, president of National Spanish Honor Society, senior class vice president, last year’s junior class secretary and, lastly, both a copy editor and insight editor for the Gables newsmagazine, Highlights.

Out of all the clubs and activities she pursued at Gables, Hamza found that PACE was the most impactful. Through PACE, she fell in love with politics, and it heavily influenced her decision-making when it came to choosing her majors.

Hamza has loved UChicago ever since she heard about it in middle school. She truly knew she could thrive at UChicago after researching the university further during her sophomore year of high school. Hamza found that UChicago offered her a chance to connect with all types of students, not just those who shared a major similar to hers. UChicago also has a history of being supportive towards first-generation students pursuing graduate school, which she found appealing.

Hamza chose her majors very carefully after discussing at length with her advisor what they deemed to be right for her. In the end, she decided to double major in Political Science and Laws Letter and Society. Additionally, she plans to minor in Human Rights and Architectural Studies and a pre-law track, while also studying Arabic.

Hamza was also accepted into the Cornell Branch Telluride Association at Cornell University in New York. The intellectually cultivated community at Cornell offered a full room and board scholarship through the Tide Ride Association.

“I did a summer program with the Telluride Association, by whom I was selected into the Cornell Branch of their group. The program, TASP, truly changed how I viewed life and how I currently live mine. So, I had to truly think between the two schools, and at the end of the day, UChicago was institutionally a better fit for me than Cornell despite my love for the intellectual community fostered by CBTA,” senior Aya Hamza said.

Hamza has always placed the college application process on a pedestal for as long as she could remember, so actually entering the important process of applying to these schools was surreal to her. During her early high school years, Hamza could never have imagined actually writing a personal statement or starting a common application.

It was a very strenuous process for her, but it was also eye-opening. For instance, she saw the impact her father owning a quick stop had on her life. When the area of Coconut Grove was gentrified, she recognized her love for architecture, specifically Zaha Hadid’s architecture, and this greatly impacted her decision to minor in Architectural Studies.

Hamza is ecstatic to be attending the University of Chicago this fall. She cannot wait to be sporting the maroon colors and cheering for the Phoenixes in her new home.