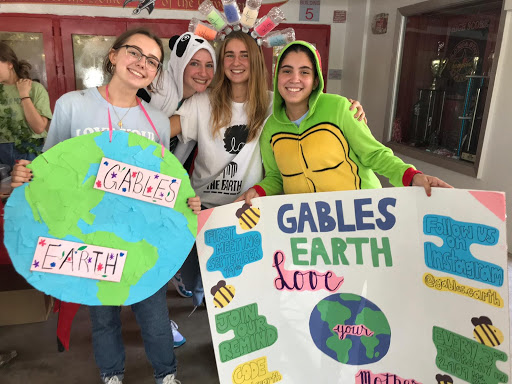 About four years ago, a once timid incoming freshmen walked the halls of Coral Gables Senior High School on her way to attend a Gables Earth club meeting. Little did she know that her interest in environmental science, plants and Mother Earth would turn into her passion and college major. This student is none other than, Co-President of the Gables Earth club, Ana Bermudez.

Bermudez, a soon-to-be freshman at Connecticut College, chose to commit to the university because it would provide her opportunities to branch out of her comfort zone. It also appealed to her as one of the few schools that offered a major in botany to undergraduates. Thinking of doing a double major in environmental studies or a french language, Burmudez is thrilled to make the transition from high school to college.

After experimenting with different fields of science such as human biology, Bermudez finally committed to environmental science and ecology. Hence, she decided to focus on studying and researching plants. Being a part of Gables Earth also fueled her interest in the environment since when she first came into high school, she was not sure what she wanted to be. Gables Earth is an environmental club dedicated to helping and spreading information about the environment and organizing fun activities for its members.

“I have always loved environmental science which plays into ecology, and you know the environment, I just really liked the idea of studying plants as my main focus and doing research. It is sorta like a niche major which is why I wanted to do it instead of something vague like biology,” senior Ana Bermudez said.

Since the start of her freshman year, Bermudez has been an active member of Gables Earth. She saw the club evolve into what it is today as she invested her time and dedication. Behind the scenes, she works alongside her Co-President Lauren Gregorio and the rest of the board to reach out to community organizations and other clubs at Gables.

Before becoming Co-President, Bermudez was also the club’s historian. As the historian, she was in charge of making flyers, sending out meeting updates and running the club’s social media on platforms such as Instagram and Remind.

On different occasions, the club has partnered up with the Wizards Club to watch “The Lorax”, as well as the Andrea Jaime Medical Leaders Club for a Microbiology crash course with Dr. Schesser from the University of Miami. Although Bermudez will not be able to oversee the club’s continuation next school year, she has talked with Gregorio and incoming Co-President Ella Londono about making Gables Earth more conversational.

In the club’s board group chat, Bermudez and her fellow board members talk freely about articles they have read and their commitment to sustainability. Next school year they hope to include all club members in these conversations and facilitate a homey yet educational environment.

Although Bermudez is a current advocate for the environment and mother Earth, the journey towards sustainability was not always easy for her. Sustainability does not happen quickly, it comes naturally and gradually. One thing Bermudez changed was her diet. Instead of eating red meat frequently her family eats chicken and does Meat Mondays instead of Meatless Mondays. In other words, she can only have meat once a week instead of six times a week. She does this since eating red meat kills wildlife, harms ecosystems and emits greenhouse gasses.

“I have not been able to take out the meat from my diet completely because of my parents and I do not cook for myself so I cannot make my own vegan meals. But, since I am now going to college and they are going to be doing the cooking, I am going to choose their vegan option for as long as I can and see how that works out for me,” senior Ana Bermudez said.

Throughout her time at Gables, Bermudez has been inspired to her peers and friends learn the importance of living a sustainable lifestyle. When the people around her try to reduce their negative impacts on the environment, Bermudez knows she has successfully done her job. Undoubtedly, she will continue to inspire others to help the planet at Connecticut College and wherever her career path takes her!