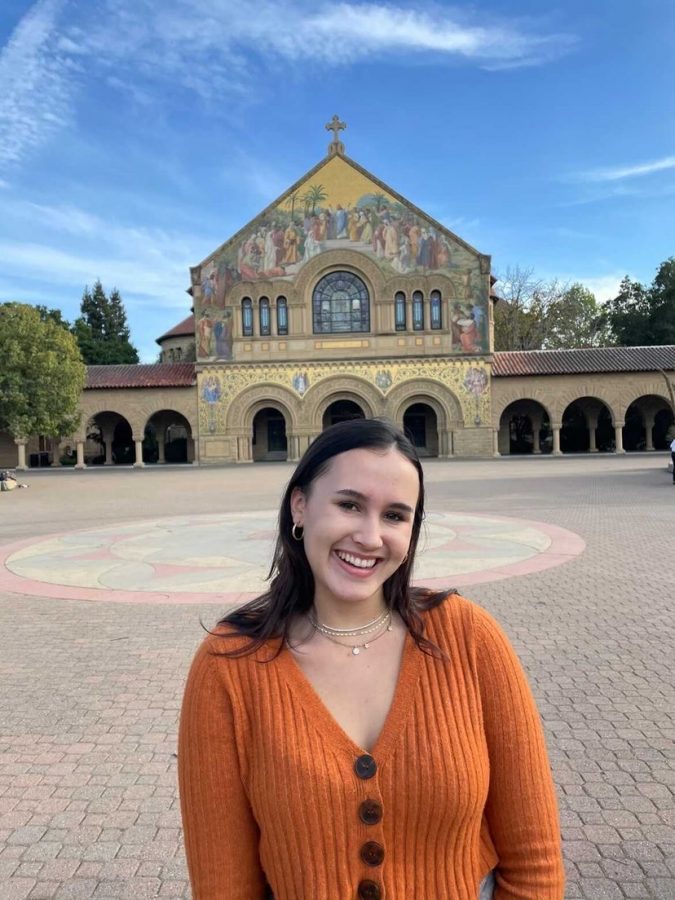 Alexandra Torres at the Stanford University campus in California.

Senior Alexandra Torres, an aspiring journalist, first realized she wanted to be a Stanford Tree her freshman year when she researched the school’s journalism program.

Torres appreciated how Stanford not only instills its journalists with writing and reporting skills but also teaches them how to report in this new digital age. She also loved the location and heard nothing but amazing things about the Stanford community.

“What I found at Stanford was unmatched. Apart from being an amazing school overall, I felt that everything that Stanford offered was so innovative, even in the field of journalism,” senior Alexandra Torres said.

Torres applied to Stanford as a Restrictive Early Action applicant, meaning she could not apply to other schools as an early applicant. She found out she was deferred in December, but Torres remained positive and focused on other applications.

Although she was deferred, she was adamant about making her dreams come true. By attending multiple virtual events and sending emails with academic updates to the admissions office, the school realized she was someone they wanted on their team. Stanford accepted her.

To future college applicants, Torres has two pieces of advice. First off, constructive criticism is very critical to writing an essay. Although it can be discouraging, the end result is always ten times better than the original essay. This worth ethic allowed Torres to also be accepted to Brown University.

Secondly, do not give up on your dream school if you get deferred or waitlisted. If you believe you are a perfect fit, then do everything possible to make sure the admissions officer knows that. For instance, go to as many local events as possible, write letters with academic updates and do not be afraid to brag.

“Definitely do not be scared of starting over and know that your first essay will probably not be the one you end up using. You may have to edit and rewrite multiple times and that is ok, it all just creates a better product in the end,” senior Isabelle Barbery said as she seconds Torres’ advice.

Through dedication and persistence, senior Alexandra Torres is now able to say that she gets to attend her dream school. At Stanford, Torres plans to double major in Communications and International Relations or Political Science.