On the Front Lines: a Look into the Fight Against COVID-19 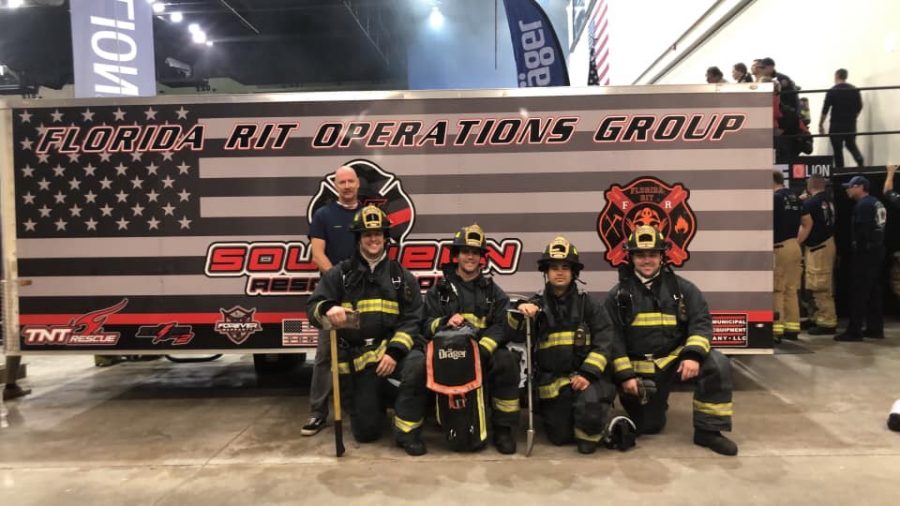 Andre Gutierrez's career as a firefighter and first responder has led him to the front lines of the fight against COVID-19 in St. Petersburg, Florida.

Andre Gutierrez begins his 12-hour shift in a now-closed community pool house, equipped with his head cap, full gown, gloves, boot covers, and the “luxury” of a 3m respiratory mask to answer the first call of the day.

As the phones begin to ring, the tiny subunit of the St. Petersburg fire department must assess each situation and quickly react to the caller’s needs, all while taking stringent measures to decontaminate their gear and avoid cross-contamination amongst patients.

While for most residents, the city’s third week of stay-at-home mandates has been characterized by strict quarantine, Gutierrez and his partner are responsible for traversing the city in response to calls from potential and confirmed COVID-19 patients.

The two first-responders are part of their city’s COVID-19 strike team, an organization composed of three ambulances with three members assigned to each unit, one of whom does not interact with patients in order to limit exposure.

The sole purpose of these units is to protect the rest of the department from contracting the virus by having a small, select group of employees respond to all the COVID-19 calls within the city limits.

The unit’s designated driver, who does not exit the vehicle, drops the two first responders to the location of each call, where they perform duties ranging from basic comfort measures to advanced airway management, depending on the severity of the patient’s condition. They transport the most severe of cases to local hospitals before returning to base.

After each call, Gutierrez works with his unit to thoroughly decontaminate their masks, patient compartment, and everything that may have been touched during the trip. Though a lengthy process, it is necessary to avoid possibly transferring the disease to patients on the next call.

This daily routine wasn’t always Gutierrez’s reality; before the global pandemic reached the shores of the United States, his responsibilities were the position of firefighter and paramedic: responding to anything from a simple slip and fall, to major trauma, cardiac arrests, fires, and vehicle accidents.

Between calls, Gutierrez would normally spend his time at a fire station equipped with a full kitchen, sleeping areas, living room, and bathroom, a place which has become a “second home” to him and his coworkers. Now, in order to avoid interaction with any non-COVID-19 personnel, the members of the unit are quarantined to a smaller closed community pool house during their hours on the clock.

“It is nothing compared to what we are used to, but I understand the reasons for it,” Gutierrez said.

Despite the risk associated with coming into contact with so many COVID-19 patients, the decision to join the team was an easy one for Gutierrez.

“It did not surprise me at all to hear that he had volunteered for the [COVID-19] unit. Even in high school, he was always the defender of the underdog,” Activities Director Ms. Suarez said.

Due to the importance of seniority in job assignments, many of the employees who were initially assigned to take part in the COVID-19 response unit were young and inexperienced. In particular, one individual assigned was a young female firefighter with a two-month-old infant at home. Rather than allow his coworker to potentially expose herself to the disease while caring for a young child, Gutierrez volunteered for the unit and began his work shortly thereafter.

“The decision for me to volunteer in her place was a no-brainer,” Gutierrez said.

In the weeks to come, Gutierrez’s assignment to the COVID-19 unit will remain intact as Florida continues its battle to “flatten the curve” of the virus’ spread. After images of college students vacationing on Florida’s closed beaches made national headlines weeks ago, even stricter regulations have been put in place to keep residents from leaving their homes and risking exposure.

Despite the state-wide stay at home order, cases have continued to rise and have not yet peaked as of April 11. Gutierrez’s 12-hour on, 12-hour off schedule is designed to give him the rest he will need after potentially responding to dozens of calls each shift.

With appropriate social distancing measures, the pandemic could be controlled down to a menial number of cases by early June, allowing residents to return to their jobs and daily routines during the summer.

“This assignment is expected to last only a few months, and I can only hope that it will be the case,” Gutierrez said.