Horseback Riding With Our Cavaliers 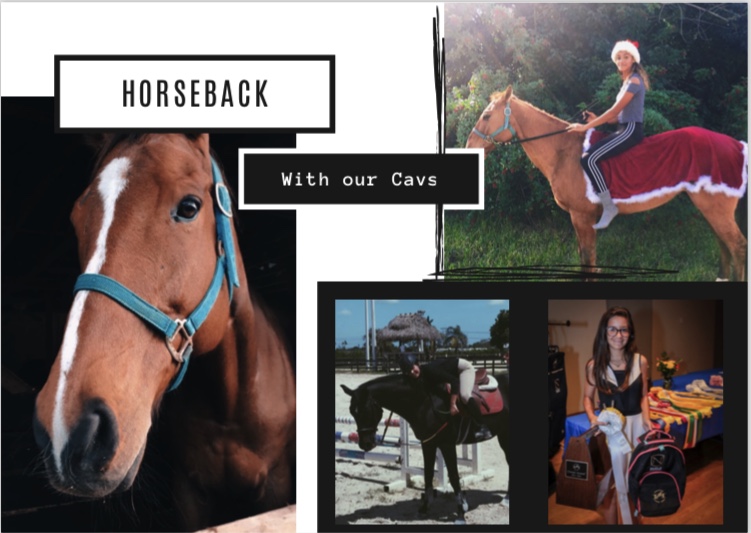 Two of our lady cavaliers with their horses during practice and competition.

Horseback riding is a sport that requires skill, dedication, and mental as well as physical strength. These three young Cavaliers have dedicated their time to master this sport. For these three talented young Cavaliers, it is horseback riding. This passion has allowed fellow cavaliers to learn about this intricate sport and for other students to come together and enjoy the sport.

There are two versions of riding, Western and English and each of them has different  subsections Each of the students featured practice in one of these where they have put in endless hours in perfecting their craft.

Sophomore Victoria Mavarez is a student enrolled in the Visual Performing Arts academy at Gables. She has been riding for about 5 years and she started when she was 11 years old. Victoria grew up admiring horses so naturally, she wanted to ride, one day she decided she wanted to go to a barn and try it out. On Feb. 8, 2015, she took her first lesson where her admiration turned to the passion she has today.

Victoria practices English riding and the three subsections which are cross country, show jumping and dressage. She primarily focuses on showjumping and has even participated in competitions. In Nov. 2015, she began to compete and over the course of time since then, she has won various awards. In 2016 she showed at the Heritage Horse Show and Plantation where she won in two challenging cups. On top of winning in two different divisions, she won 6th place overall, against 200 riders and she only showed 4 times that year.  Victoria has around 40 ribbons hanging in her room as well as a grooming box and a book bag that she takes to school.

When it comes to her favorite memory, she says it is hands-down when she met her heart horse. Meaning the first horse she strongly bonded with, his name was Indy 500. He was named after the Indy 500 race because he is so fast. They were so close they even won 3rd place perfect match of rider and horse. When Victoria first started she used to spend every Saturday from 11 am to 8 pm at the barn. She sadly had to leave after her barn Hunting Horn Stable split up. She currently attends Miami International Riding Club and she rides a different horse named Cashmere. Her dream is to become an equine vet and show in Grand Prix in Wellington. She says horseback riding helps her in school because she has learned how to multitask, be organized and have dedication because she needs all these things when she is riding. It has figure out what she wants to do in the future and become a well-rounded person in and out of the barn.

“Personally I have been riding for so long it feels like it is apart of me now, the days I can not go ride are probably the worst days because the bond that you create with your horse is indescribable. I think people underestimate horseback riding, you really have to love riding to do it because it is not made for everyone,” sophomore Victoria Mavarez said.

Vivian Frederique is a sophomore in the International Baccalaureate who has been horseback riding since she was three-years-old. It all began when she was bored one summer day and wanted to bond with her family. She eventually continued horseback riding and began to develop personal and emotional connections with her horses. Until this day, she owns ten horses: Dakota, Angel, Mia, Bongo, Blue, Misty, Merlot, Buddy, Prince, Skye and Marley.

In Southwest Ranches, Vivian has a ranch that she has owned for five and a half years where she goes and visits every weekend. She considers her barn as a meaningful, peaceful and relaxing place for herself and family. Throughout the years of her owning this ranch, she has taken many of her friends over there who ended up enjoying the visit and were ready to return for another stay. It is common for her to bring her friends along with her brother’s friends and teach them horseback riding, go fishing nearby or drive around in Polaris.

When she rides her horses, she primarily focuses on the safety of both her horse and herself, along with her surroundings so her horses do not get startled. Throughout her thirteen years of horseback riding, competitions have never been one of her interests. Being into horseback riding has inspired her in school to keep looking forward to something she truly enjoys doing. In the future, Frederique sees herself as an equine chiropractor.

“My favorite memory was when I took my horse, Dakota, for a lake ride. My family and I loaded the horses into the trailer and went to an equine-friendly lake and swam in the water with the horses,” sophomore Vivian Frederique said.

Ana Pinilla is a sophomore in the Visual Performing Arts who has done English show jumping since she was five years old. Every Sunday she visits the Good Hope Equestrian Center from 9:00 AM to 10:00 AM.

Her favorite memory throughout her journey was when she rode a horse for the first time. It was her first class and it was the reason she wanted to continue learning about this field.

Her heart horse is Sam I Am, whom she used to compete and spend all her time with. Nowadays, she usually rides her horse named Bob and primarily focuses on English showjumping. She loves competing and has won various ribbons and awards. Unfortunately, she has stopped showing because competitions are very expensive. Taking care of her horses is one of the best parts of her day; she is always happy when she is around them and they mean the world to her. She even plays with small Beryer figures and reads books on them. If she could, she would spend all her time with them.

Horseback Riding has helped her learn how to multitask, motivate her, and most importantly, it has helped her with her mutation, GNAO 1 which causes movement disorders, by helping her posture, stretching her muscles and making her stronger. When she grows up, she hopes to own her own barn with baby horses in order to raise them and take care of them as well as becoming a professional horseback rider.

With the variation of sports and school responsibilities, these three girls truly show what it is like to be a true Cavalier.