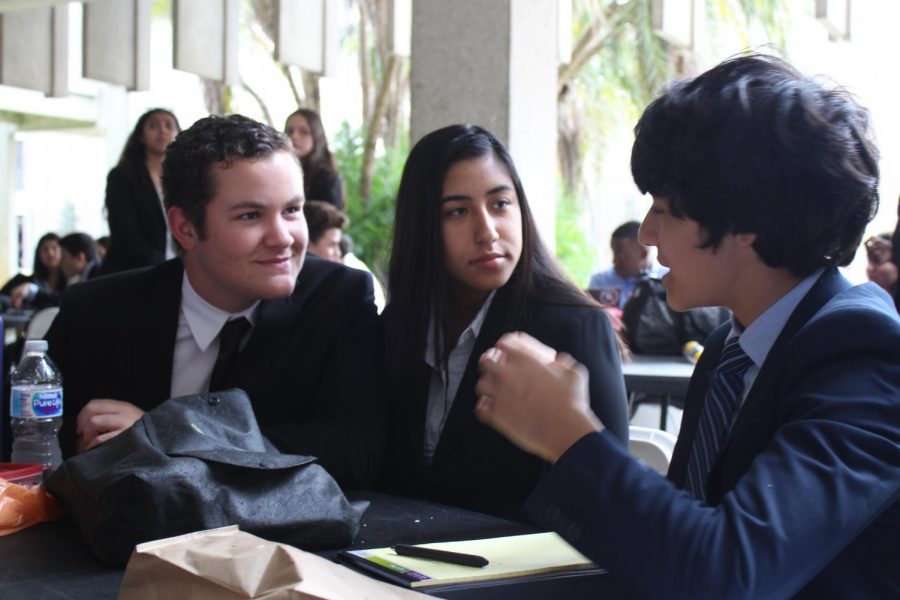 The Coral Gables High Model United Nations team (MUN) attended the Miami Dade College MUN conference last weekend. Having become an official Gables club only this year, MDC MUN was a first for the majority of the membership. Due to this, nerves were high and expectations were shaky. On Friday Feb. 23, the hopeful Model UN team arrived at school impeccably dressed and ready for an unforgettable experience.

“This was my second conference, and although I was understandably nervous, I was excited to compete and give it my all once again,” sophomore Daniela Parra del Riego said.

The first day began with opening ceremonies headed by the Secretary General, a Model UN veteran and member of the University of Miami chapter. Seeing as the conference is marketed as a “learning conference,” he reassured the anxious students of the willingness of all the staff at conference to aid in each delegate’s understanding of Model UN. Following the Secretary General came Alberto Carvalho, superintendent of Miami-Dade County Public Schools. In the wake of the mass shooting at Marjory Stoneman Douglas, Carvalho gave a captivating and awe-inspiring speech on the importance of dialogue and diplomacy between people of different backgrounds, undoubtedly setting the tone for the entire conference; it was under these auspices that the Gables MUN team began their weekend. Among the countries at the UN, the Gables team represented Cuba, Egypt and Iceland in the respective committees. The first day of conference went remarkably well, with several members of the team already developing a great presence in their committees. Solutions to pressing issues such as climate change and the situation in North Korea had already begun to develop through working papers, which included a carbon tax and sanctions against all countries who cooperate with North Korea.

Planning to continue the success of the first day, Gables delegates began to formally draw out their draft resolutions. In the UNESCO committee for instance, the issue of language preservation was being tackled through the development of a mobile application sanctioned by the United Nations. As conferences came to a close, the delegates still came away confident in their performances. Then came closing ceremonies, perhaps the most awaited moment in the entire conference. After a short speech, the Secretary General began to announce the committee awards. Seemingly one after the other, Gables Model UN won an award in virtually every committee with only a few exceptions. More shocking however, was the fact that many of these awards were for Best Delegate. Angie Lopez, Alexis Merer, Jordan Armour, Cristian Ochoa and Brianna Curran, among others, all won best delegate with most of the remaining team winning honorable mention. Despite these individual victories, Gables MUN won the best delegation award as a chapter, the first time in the organization’s history. The sea of praise that followed not only came from teachers but from fellow delegates at the conference, who were truly blown away by their performance.

“As president of this club, I have seen it grow from practically nothing. Words cannot describe how proud I am of my team,” junior Cristian Ochoa said.

The dynamism of Model UN cannot be overstated, with it being the perfect blend of competition and diplomacy. The performance of Gables at Miami Dade Campus was astonishing, giving first timers exposure and allowing veteran delegates to perfect their craft. With such an incredible performance, Gables Model UN received the necessary boost in confidence to put them over the top at future conferences.