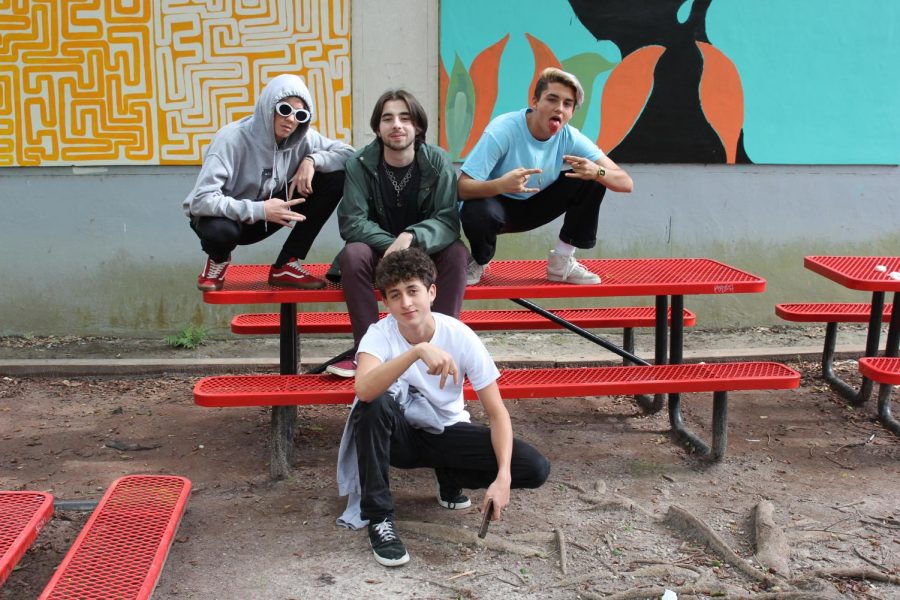 The Kappameisters pose for a group picture.

As high school students, we listen to an incredible amount of music, whether it be while working out or in between classes. With the growing number of platforms available, such as Soundcloud and Youtube, the creation and distribution of music have become easier than ever before. Adrian Flores, Alexander Yelamos, Ethan Tolpin, Markel Valmaña and Vicente Rovira capitalized on these opportunities, creating their very own music group – Kappameisters.

Kappameisters is more than a music group, it is a group of friends. Before the group came to be, they were just your average guys hanging out at the skate park. Ethan Tolpin was the catalyst for the group as he was the one who introduced Adrian and Alex to rap music in the sixth grade. Their idea to make music came about spontaneously many years thereafter. Adrian, the producer and head of the music group, was mixing beats on his computer for fun one day and the group freestyle rapped to the beat, and thus a deep commitment to the music genre was born. The name of their group comes from the name Kappa, a character from one of their favorite video games that they played when they were younger. The creative names don’t stop at that, each member has their own pseudonym: Adrian Flores is known as Barzee, Ethan as Young Jewban and Alex as Lil’ Bleach.

“It is refreshing to see music come from somewhere that isn’t Hollywood, which produces music that, in general, lacks depth and creativity,” junior Eve Adan said.

The music is produced primarily in the backhouses of either Adrian or Ethan’s main home. There they have fashioned a microphone and speaker to record and edit their songs. The beats for the songs are created by Adrian either prior to or during the recording of the vocals. The vocals are performed by the rest of the members of the group after having heard the beat; discussing the themes and subject matter of each song. Among the themes of their songs are controversial topics such as drug addiction and failed relationships. From there, the raw music gets edited by the group as a collective, which takes anywhere from 2 weeks to a month. The final step is the publishing of the song on Soundcloud for their legions of fans to enjoy.

The future for the music group is bright, despite never having performed live as they are planning to do so next year. In addition, they plan to release an EP featuring brand new songs soon. This music group has grown immensely, both in fanbase and in importance for the members. What was once seen as a hobby has transformed into a serious venture for the group.