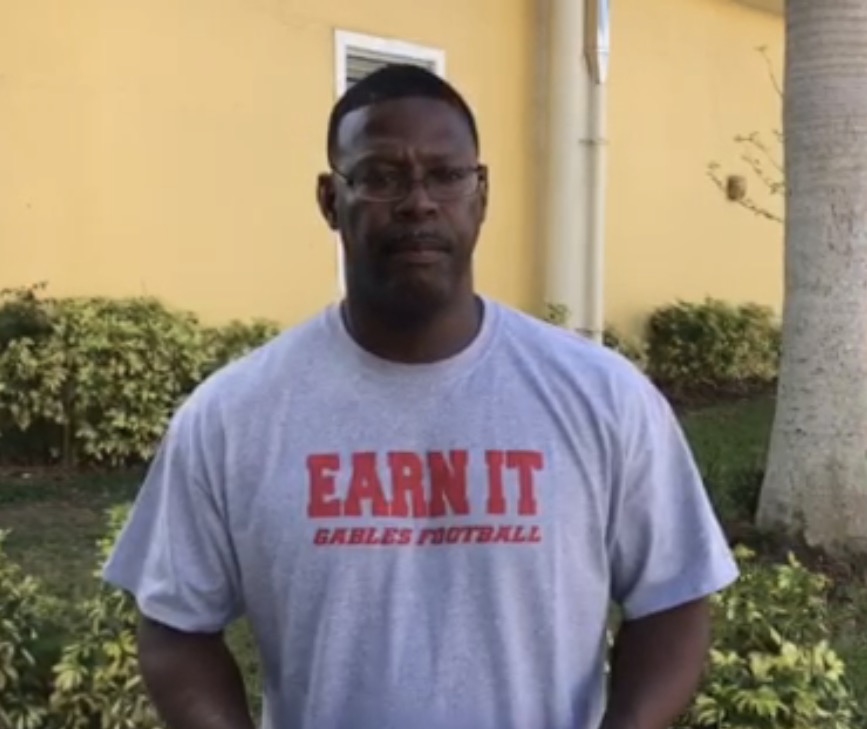 Coach Neal is ready and excited to continue the Gables football team's success both on the field and in the classroom.

After Coach Rodger Pollard stepped down, Coach Tim Neal was ready to continue the legacy the Gables football team has created and is focused on making sure fire rises. Neal is a very experienced coach who will continue to lead Gables Football down the path of success both on and off the field by emphasizing the importance of academic success in the classroom.

Q: What inspired you to start coaching?

A: I think it was the fact that I couldn’t play anymore and I love football so much so I couldn’t give it up and this was the only opportunity to continue to be around it.

Q: What is your favorite part about being a coach?

A: My favorite part about being a coach is helping kids move in the right direction, keeping them focused on positive goals and getting them where they want to be in life.

Q: How long have you been coaching and have you coached for any other schools?

A: I’ve been coaching for over 22 years. I started in Hialeah High back in ’94; I was there for a year and a half. Went to South Miami for six [years], went to North Carolina [in] West Ruin High School for a year, came back to South Miami, and then was at Gables from ’99 to ’09, left to South West for eight years and now I’m back at Gables. One year on college level I coached running backs at Living Stone College where I graduated.

Q: We’re you an avid athlete in high school/college?

A: Yeah, I played in American High School. I was a four-year starter which was unheard of back in the ’80s. I ended up not being that great academic student which is why I push my kids to go above and beyond with the grades academically. I signed with LSU out of high school but had to go to a junior college because of test scores.

Q: What changes do you plan on making for the upcoming season?

A: This upcoming season I just want to continue what Coach Pollard has already started and brush on my own ways of doing it. Definitely, discipline and definitely a serious focus on academics.

Q: Do you have any words of wisdom for people interested in being on the team?

A: Yes I do, if you wanna play football for Coral Gables Senior High School you have to take it seriously, respect the teachers, understand that academics are the only way that you are going to be able to survive and discipline is the only way to get you through and to where you wanna go.

Coach Neal’s aim is to continue maximizing the team’s full potential and assuring that they experience some of their best seasons in the upcoming year.