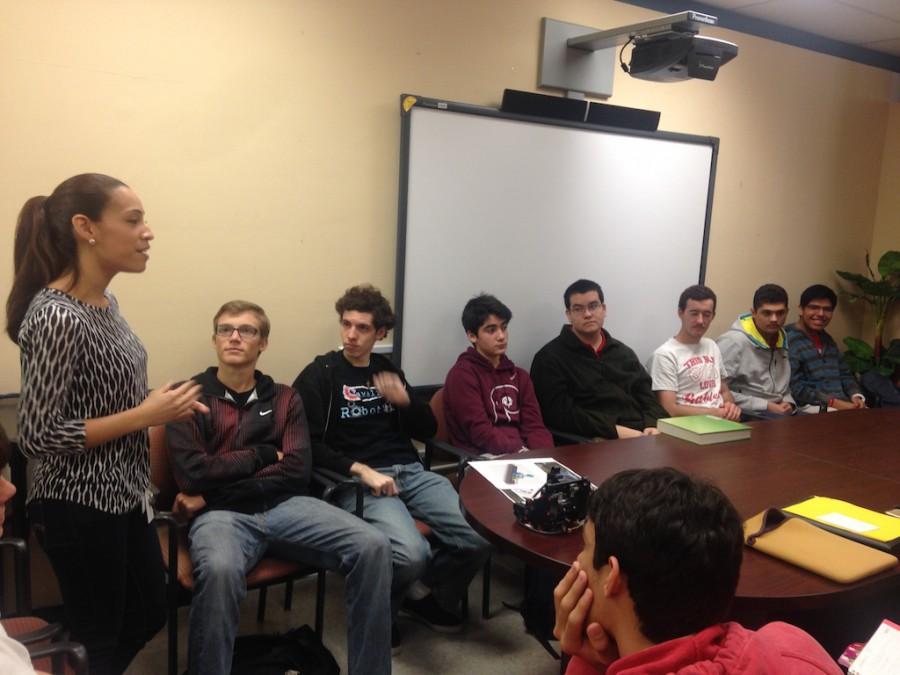 Dominguez is no ordinary woman.She works as an engineer for Barfield inc., a company that designs an tests equipment for planes.

Cavaliers had the opportunity to meet with Joanna Dominguez, a mechanical and aerospace engineer who works at Barfield Inc., a company that designs equipment to test planes for flight safety. Students were thrilled to ask Dominguez questions and obtain professional advice.

“I knew I liked math and science, but I didn’t always know what I wanted to do,” Dominguez said.

A South Miami High School graduate, Dominguez was passionate about the sciences and mathematics; she took Honors and Advanced Placement Physics and Calculus, and advised students not to get discouraged by the difficulty of these courses in high school, since they seem to become easier in college.

“Don’t freak out if a class is too hard, don’t be afraid to ask the professor, they will help you out. My physics teacher helped me a lot. You create a bond with certain professors,” Dominguez said.

Dominguez decided to attend the University of Miami (UM) because of its engineering program and its proximity to home. However, Dominguez also considered going to The University of Florida (UF), Georgia Institute of Technology (Georgia Tech) and Florida International University (FIU).

“It would have been different if I attended Georgia Tech, I would have had different opportunities,” Dominguez said.

College for Dominguez was not especially difficult. However, she believes the first 2 years are the toughest years because one takes elective courses in addition to engineering classes like calculus and physics which can prove to be very challenging at times. Dominguez felt prepared for her job knowledge-wise, but she felt like experience was the best way to learn.

“It took me 6 months to find a job since the economy wasn’t doing well at the time. It is usually not that difficult to find a job as an engineer because of the different specializations. [Also] Do take Calculus and Physics, you will actually need them,” Dominguez said.

In order to encourage students aspiring to be engineers, Dominguez had a few pieces of advice to give students regarding their aspirations.

“Do participate; join a group. As an engineer, they don’t teach you how to do things like writing a resume, or doing an interview,” Dominguez said.

Dominguez inspired students by demonstrating the versatility of an engineering career, and most importantly, showed students that determination is key.