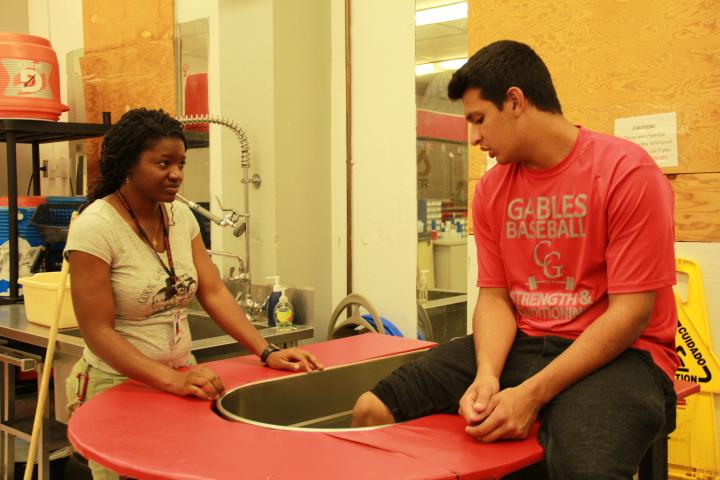 Ms.Singleton helping out a student in the whirlpool

Roaring crowds cheer as they watch the football game and a gasp spreads through the crowd. There is an injury on the field. Who is there to help them? Athletic trainer Miss Shannon Singleton, of course. Singleton has been working as an athletic trainer for just over six years, and before discovering athletic training, she wished to be a doctor. Now, that dream is long gone.

“If I had to choose to be something else other than an athletic trainer..I really can’t think of anything I would rather do,” Singleton said.

An athletic trainer is a person who is a certified healthcare professional who works in the sports and medicine fields. It is the athletic trainer’s job to asses situations carefully, use the correct methods to help injured individuals, and keep track of every athlete’s medical records.

“I came to Gables because I was from [Miami], I had some friends, and family here too. And the weather – I missed it,” Singleton said.

Before Singleton came to Gables, she had also worked as a trainer at West Ashley High school in South Carolina. She has been working at Gables for roughly a month and she is having a great experience so far. The most common injury that she has to  help out with is shin splints with the Gablettes, the track team and the wrestlers.

“I feel as if Gables and I chose each other. That with a lot of divine intervention involved, I ended up here at Gables and I couldn’t be happier. I definitely feel like I made the right decision by coming to work here, because I love the competitiveness, culture, people and progressive growth of the school and athletic training program,” Singleton said.

“My brother started playing football and I had to stay after school with him, so I started helping out with the football team, getting water and “taping” ankles. I was the team manager for football and wrestling. When I discovered athletic training as a profession I was hooked. I had been doing it since I was a freshman in high school, so I knew it was the career for me,” Singleton said.

Singleton believes that Gables has a strong 30-year foundation for the entire athletic training program with all the hard work already put into it, and would love to expand upon it, continuing to experience the pride, diversity, culture and tradition of being a true Cavalier.