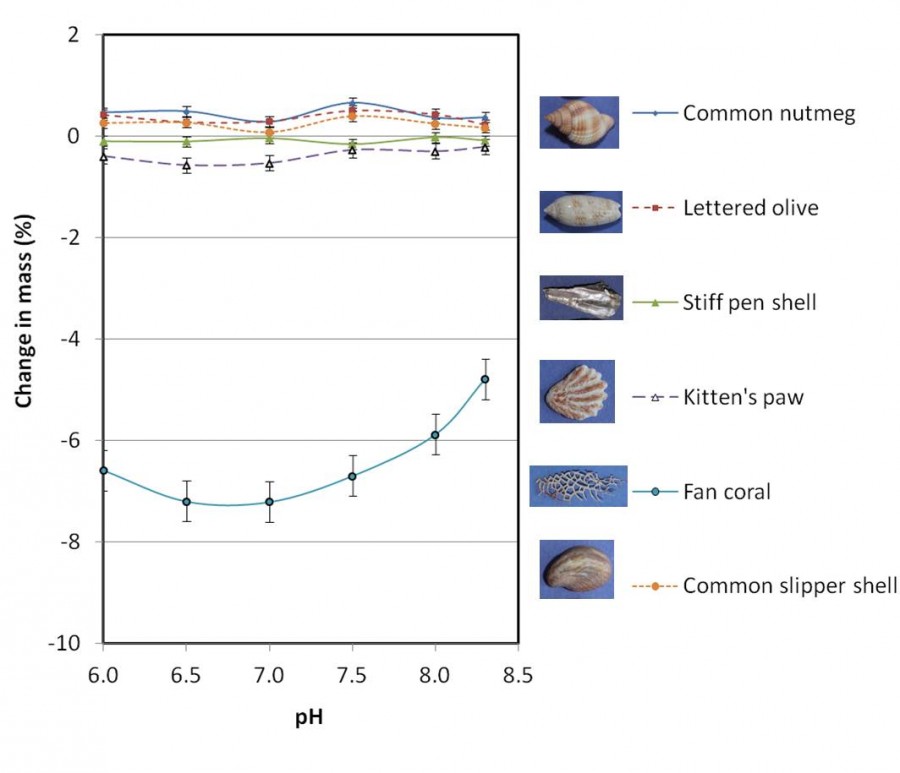 This is one graph from Tansel's research illustrating the change in the mass of exoskeletons exposed to saltwater at different pH levels.

Many scholars dream of having their work published for the world to see. Unfortunately, the fact is that many projects fall short of publication. Yet Derya Tansel, a 2014 Coral Gables Senior High (CGHS) alumna, had her research published on Jan. 2, 2014 by the Journal of Emerging Investigators.

Tansel worked alongside Adriadna Arreaza and Berrin Tansel, as well as with Gables science teacher Mr. Eric Molina, in her study examining the effect of pH on the exoskeletons of selected saltwater organisms, which rely on a process called calcium fixation. Mr. Molina supervised the project and Tansel carried out her research in a lab at Florida International University (FIU), where FIU graduate student Arreaza taught her how to use the lab equipment. Their results showed the extent to which varying pH levels resulted in the loss of mass within certain marine organisms with exoskeletons.

“Mr. Molina was extremely supportive the whole way. I didn’t want to make his role as my Extended Essay (EE) advisor like a second job for him because the IB teachers put a lot of effort and time to help everyone pass the exam. He helped me with the editing and formatting of the paper. He pointed out stuff that I was missing because International Baccalaureate (IB) is really picky about what they want,” Tansel said.

Tansel began the project during her junior year and continued the experiment during the summer of her senior year.

“I didn’t want to procrastinate my Extended Essay and I knew I wanted to do it in Chemistry. Mrs. Gonzalez, the chemistry teacher my junior year, mentioned that the Google Science Fair opened. I thought this would help me to establish what I wanted to do for my EE. As for deciding the topic, Miami was plentiful in beaches and I wanted to make the most of them. My mom suggested I study the variations in pH because it was simple and it had a lot of applications,” Tansel said.

Then, during her senior year, she just worked on editing and correcting the format for her EE, a requirement of the IB academy. Tansel’s mother, who works at FIU, received an email from a coworker who wanted FIU students to take advantage of available resources, The Journal of Emerging Investigators being one of them. The journal wanted its papers in a different format, which required Tansel to rearrange some parts of her EE. Then, her work was published!

“It feels pretty awesome to be published. I think it shows that hard work does pay off in the end,” Tansel said.

In school, Tansel was very involved and respected in SECME areas. SECME stands for Science, Engineering, Communication, Mathematics, and Enrichment, a set of areas where Tansel excelled. Tansel was also the senior secretary of the National Honor Society (NHS) and secretary of Mu Alpha Theta (Math Club) where she managed the Math Club’s tutoring sessions every Monday and Tuesday and participated in competitions. Also, Tansel had a position as a treasurer of the Art Club. Mr. Hernandez, one of Gables’s assistant principals who has responsibilities including overseeing the science department, is “ecstatic” to hear the news of her publication.

“It’s great. It shows the level of scholarly work the school was able to produce. It is a testament to Mr. Molina … and to the … young ladies,” Mr. Hernandez said.

Last year, Tansel received one of few Brown and Caldwell scholarships. Today, Tansel attends the University of Florida (UF), where she is pursuing her major in electrical engineering and remains a very hardworking and humble student.

“Everyone has their own definition of success. I don’t really consider myself as successful – more like always striving to reach the next step. Whether it be the next homework problem or increasing your responsibilities, it’s important to know your limit and then to try to break it,” Tansel said.

By following her advice, maybe you too could find your works nestled in among respected and “pHantastic” publications like Tansel’s.