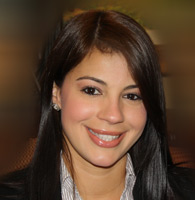 Imagine. You’re a second year lawyer.  It is your first jury trial. You’re opponent- one of the largest retail corporations in the world, Walmart. This sounds like a daunting task, whether you are an experienced lawyer, or not. Yet, Lisa Cabrera, a Gables alumni, won the case due to her hard work and dedication to her field.

Cabrera graduated from Gables in 2003 as an accomplished IB student. As an active and hard working student, she succeeded in both academics and athletics; Alvarez did so much within our school.

“I was in student activities from 9th through 12th; president of my class from 10th until 12th. I did the morning announcements. I was the host of all the pep rallies and CAV crash. I played softball from 9th grade through 11th grade; I was also on the cross-country team in 11th grade, and I was a cheerleader in 10th grade. I was also homecoming and prom queen,” Cabrera said.

It seems there is nothing Cabrera cannot do! She was even a part of the mock trial team, coached by Julio Garcia. Garcia and her cross-country coach Caballero were her favorite coaches, and Mrs. Ana Suarez, her favorite teacher.

Even as a high schooler, she knew she wanted to hold a legal career in the future and she took steps to prepare herself. On the topic of her fond high school memories, she explained her appreciation and love for her favorite mentors.

“I owe so much to Coral Gables, and particularly to Ana and Julio who taught me how to be a leader. They not only gave me support, but they gave me so much knowledge and taught me the fundamental skills of speaking in public. They were always my biggest cheerleaders and supporters. Whenever I felt I couldn’t do something, they reassured me that I could do it. They gave me a platform to develop my skills.  Julio’s law studies class was where my dreams of one day becoming a lawyer began,” Cabrera said.

Today, Cabrera works for the Alvarez Law Firm as a second year associate, which she has been working with since 2007 as a legal assistant and law clerk while she attended school at Florida International University. Throughout college, she worked hard in the legal sphere as she competed on the FIU mock trial team, where she says that a lot of the skills she used then she gained from Julio Garcia back in high school. She also held the position of vice president of the Cuban American Law Society.

All of this preparation and dedication to the legal field coupled with Cabrera’s drive to succeed helped her obtain her first legal victory on her first case! She was representing a police officer that was injured while trying to arrest a war veteran experiencing Post Traumatic Stress Disorder on top of other serious mental diseases. The veteran wished to buy a gun and was told they were not carried at the store. Following the ordeal, the veteran began to act out and became violent towards the sales associate. The crazed customer continued to cause trouble and the police were called. Then the unthinkable happened; one of the managers at the scene decided to offer the mentally disturbed customer a knife. The police arrived and confronted the veteran, now holding a knife. The officer was attacked and tased the veteran. The effect was not long lasting and the veteran was able to attack the officer before he or she was subdued. This was not before the veteran went after the officer’s gun. The upset customer  was hindered by back up officers and bystanders who helped save the officer.

Thanks to Cabrera, the officer was awarded $150,000 from Walmart, who was charged with negligence for putting a weapon in the hands on a mentally unstable customer.  This customer was prosecuted and served time for the injuries to Cabrera’s client. Due to Cabrera’s skill, Walmart has to pay for a lapse in judgment that could have turned out much worse. Let’ s just say it was a mission accomplished.

“My advice to students is to use the programs that are available to you. They gave me the foundation I needed, and I still use the skills I learned then, today. I am forever grateful to Coral Gables High, Ana, Julio, and all the wonderful teachers I had a privilege to receive an education from.  I truly believe it is one of the best schools in South Florida. Also, remember never give up on dream, with hard work and dedication you can make almost any dream a reality.” If you listen to Cabrera’s advice, maybe you too can accomplish your legal mission like Lisa Cabrera.