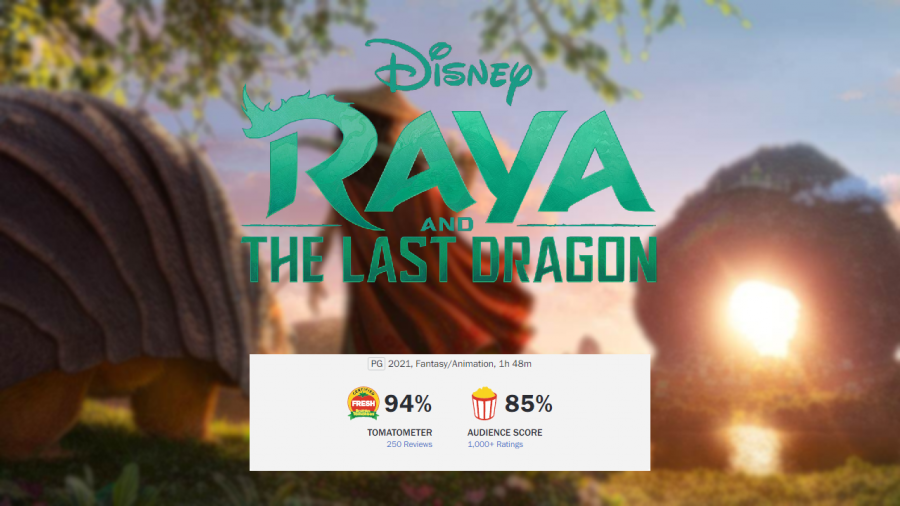 Raya and the Last Dragon recieves amazing reviews after its release in theatres and in Disney+.

“Raya and the Last Dragon” is the newest Disney release streaming on Disney+ and showing in select theatres. Disney almost always comes out with masterpieces for movies and this one is no exception. The story was creative, the characters were funny and unique and the animation was beautiful. Every aspect of this movie was wonderful and a joy to watch.

One of the most amazing aspects about this movie was the world that Disney was able to bring to life. The animators and story team were able to create a world almost completely from scratch and animate it to perfection. Every part of this world that they thought of was carefully planned, which reflected in the final product. The animals and settings made the viewer feel as if they were almost living inside the world. The creative landscapes emphasized the disparity between the groups in conflict and made the settings for the action feel different from most movies. The colors were diverse and vibrant which made the viewing experience very enjoyable.

The characters were also one of the best things about the movie. The side characters that joined Raya throughout her adventure were all unique and served as comedic relief, essentially a requirement in Disney movies. While most side characters are usually tossed into a movie just to be alongside the main character, these characters felt as if they were meant to be just as important as Raya. Each of them help Raya grow as a person to eventually defeat her adversary and reunite the people in her world.

“I really enjoyed this movie. It was really funny and had amazing action. I would definitely watch it again” junior Isabella Flores said.

On top of these side characters, Raya and the main antagonist, Namaari, were strong female roles which elevated the story to another level. Some movies, such as “Captain Marvel” and “Wonder Woman” have females as the main character in the movie to try and promote female empowerment, but it does not work. In these movies, these characters give the impression to the viewer that they are only strong because of the powers they are given and not the hard work and suffering that led them to achieve their final goal. In this movie, they established two strong female characters which lead the story and do not feel corny like these other movies. Raya and Namaari are both conviving roles for these women which helps promote female empowerment in a good way.

The animation of this movie was outstanding. Recently, Disney has knocked it out of the park when it comes to animation and this movie reinforces the high standard that is set on Disney movies. The animation of the characters, animals and world elements were fluid and looked almost life-like. The fighting and action scenes were also beautifully animated. This movie has a lot more action than recent Disney movies, however it did not look like the animators struggled in this department. Every fight or chase scene felt realistic and was entertaining to watch. Overall, the animation was one of the most stunning things in this movie and deserves to be highly praised by every viewer.

“Raya and the Last Dragon” is an incredible movie for the family to watch, at home or in theatres. With a unique world, amazing animation and creative characters, it is hard not to like this movie. This movie is a must watch and will go down as one of the best Disney movies.