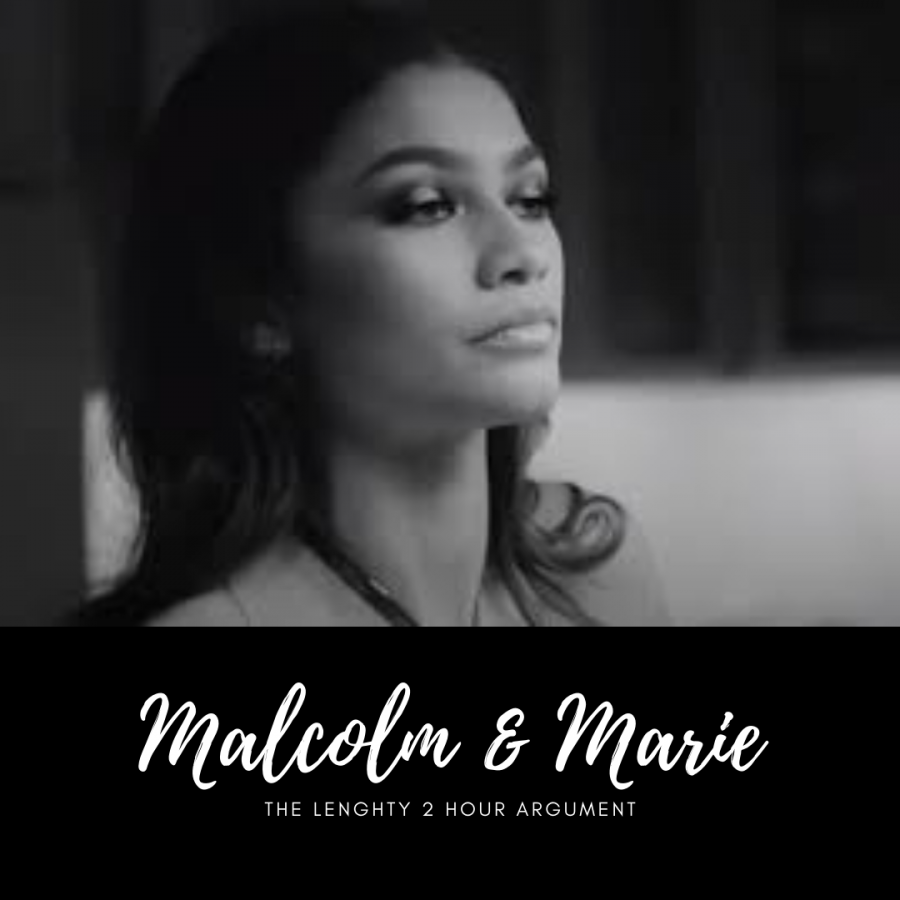 Netflix’s new film “Malcolm & Marie” delves into the woes of Malcolm, a up-and-coming director who just released his biggest hit and his girlfriend, Marie. The film highlights their break-ups and make-ups after Malcolm forgets to thank Marie in his opening premiere speech.

This is not a “lovey dovey” romance film. Malcolm and Marie are unhealthy, their relationship is unstable and uncompromising; it is draining just watching it. Most of Malcolm’s rants revolved around film critics and race wars in film and while these topics helped showcase how egotistical, temperamental and self-centered he was, it was the most boring thing to listen to. During those 10 minutes, one cannot help but think, “Why do I care?” Malcolm is ruthlessly evil and judgemental at times, bringing up some of Marie’s worst moments and relentlessly shoving it in her face.

However, Malcolm’s unlikeability is not a critique of the film itself—Malcolm was written this way—but a praise of John David Washington’s acting. Marie is also not a perfect character, but there are moments where it is difficult not to be in awe at how good Zendaya is performing. It was raw and truly showed the full spectrum of human emotion. There was a particular scene when Marie acted for Malcolm to prove her competency as a performer and it was mind-boggling and “meta” to see Zendaya act as an actor and do it so effortlessly.

“Malcolm and Marie kind of confused me, it has no real plot line so it was hard to keep it. It seemed sort of repetitive,” said freshman Alainie Rodriguez.

“Malcolm & Marie” is not heavy on plot. It is easy to follow, as it is more so based on the relationship between Malcolm and Marie. This is something a lot of people did not like. They feel as if the movie can watch the first 20 minutes of it and get the entire gist. However, if you want to get to know the characters and analyze the film critically, you have to watch until the end. It will give you a complete view on who these characters really are and what they stand for. This film was also in black and white. The cinematography is smooth, clear and sharp. It really sets the mood and forces the audience to focus a lot more on the interactions. The music and setting also fit perfectly.

“The setting was clean and smooth. I liked the black and white.” said freshman Rocio Lopez.

The film itself is sort of an indirect clapback at many film critics. It is obvious that Sam Levinson’s thoughts are reflected in Malcolm’s character and manifested themselves throughout the movie. As the director of the TV series “Euphoria,” Sam Levinson has been faced with similar critiques about race, femininity and the use of excess nudity. Malcolm’s rants about Hollywood and “that one white girl from the Los Angeles Times,” the critic who had several critics on his film, go on for longer and longer segments and even for a movie like this, it seems so out of place. Malcolm comments on the use of black characters and the immediate correlation with politics, perpetuating the idea that “not everything is political.” He also goes into nudity in film, emphasizing that it is truly “just the way things are” and not that big of a deal. Marie does counter some of these ideas, though, offering a unique and contrasting perspective. Overall, it was just weird to hear all about how much the film industry sucks in a movie that was supposed to be about a toxic relationship.

“Malcolm & Marie” is a lengthy display and rant about both Hollywood and the way partners should appreciate each other in relationships. The camera work was amazing and it was clear how much attention to detail there was in the setting. While it is not very plot-focused, if you analyze it from a psychological perspective, you may find the film to be very enjoyable.[powr-twitter-feed id=63a2fb44_1614226021498]