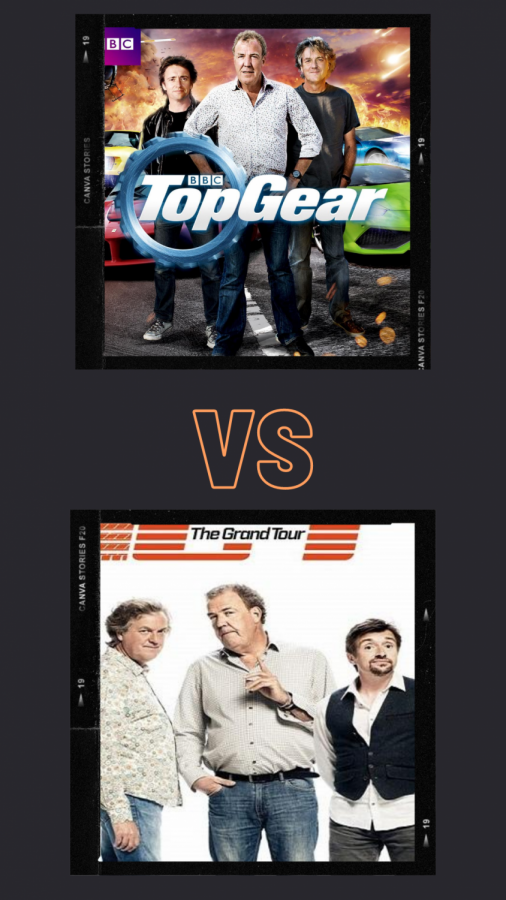 The two shows are notorious for their witty jokes and car fanatics.

Beginning in 2002, BBC Two rebooted the 70s auto-focused show, “Top Gear”. With a new cast, Jeremy Clarkson, Richard Hammond and James May, this motor vehicle show was able to garner a massive following of dedicated car enthusiasts, thanks to its mixture of car discussion and entertainment.  Top Gear focused on reviewing both old and new cars, motoring challenges and celebrity timed laps. However, in 2015, several controversial incidents would lead the BBC to reformat Top Gear and for the worse.

Top Gear seemingly had it all: a trio of hosts similar to the “Three Stooges,” beautiful cinematography, detailed reviews, hilarious challenges and entertaining celebrity appearances. The most important part of a comedy show of this kind is being able to deliver on its humor. Top Gear is able to present flashy cars, while making sure you have a laugh. Unfortunately, at the beginning of 2015, Clarkson assaulted a Top Gear producer over a disagreement. Clarkson was soon fired over the incident. What followed was the other two hosts quitting the show, where Top Gear soon diminished.

In 2016, the three original hosts of the Top Gear were hired by Amazon to create a similar successor to Top Gear, named, “The Grand Tour.” The Grand Tour followed a similar format to Top Gear. The only notable difference was that every new episode would occur in a tent in a new country. The Grand Tour has the same segments as Top Gear, except tweaked only slightly. “Timed laps would be done by an American NASCAR driver, “The American,” his character was portrayed as a hilarious stereotypical redneck. Celebrities would complete timed laps like Top Gear; however, a running gag of the celebrities attempting to make it to the tent, would be killed in a comedic accident. The last segment, named “Conversation Street,” would involve the hosts discussing the latest cars and hilarious banter amongst each other.

The humor of both shows lean toward the hosts making fun of each other and slightly offensive, dark-humored jokes. In Top Gear, the humor doesn’t rely largely on skits and instead improvisation– the jokes usually never miss and always make you laugh. In the Grand Tour, the trio of hosts would make use of skits as a form of humor. However, this usually causes the jokes to miss and fall flat among the audience.

Cinematography is important. It shows you are able to broadcast a subject in a multitude of creative ways. Top Gear excels in this factor,  making vehicles and locations look stunning and mesmerizing. The Grand Tour copies the same methods of cinematography as Top Gear, but in a few shots, The Grand Tour would meet the bare minimum for shots of cars and landscapes. The Grand Tour needs to create better shots in order to captivate the audience.

“Top Gear is better, as it focuses more on cars rather than the Grand Tour focusing more on attempting to appeal with skits,” sophomore Luis Tobar said.

Top Gear went from a boring monotone show about cars, to a humorful, entertaining show that will pique your interest in cars, no matter how much you know about vehicles. The setups and executions of everything in a daily episode of Top Gear demolish the attempted copycat of The Grand Tour.