New Netflix Original: Outer Banks Is Worth the Watch 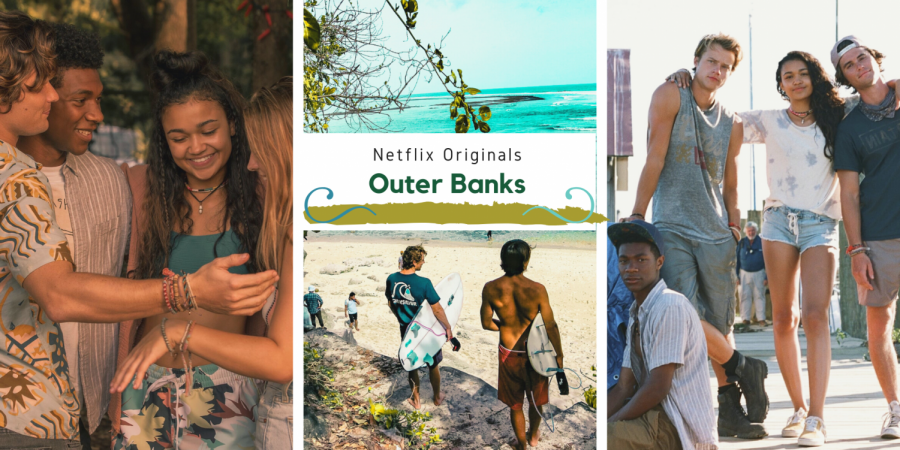 Outer Banks makes headlines being in the Top 10 on Netflix in the U.S

Outer Banks is a new Netflix Original that takes place on the Outer Banks of North Carolina. The show takes the audience on a wild journey with their main character John B. over the course of 10 episodes. He is an orphan whose mother is not in the picture and his father mysteriously disappeared after looking for a legendary treasure. After John B. and his three friends JJ, Kie and Pope discover a sunken boat, he is determined to find out the truth about his father’s disappearance and the $400 million involved.

The show is very clear from the start with the social classes in their island, the rich kids with their fancy yachts and houses are called the Kooks. The Kooks live on a particular side of the island called Figure 8. The people who work multiple jobs and try to make ends meet are called Pogues. Pogues live on the part of the island called the Cut. The rivalry between each is made explicitly clear and radiates a type of Romeo and Juliet, Montegue vs Capulet feel. The Pogues wish they could have a bit of the “bubble wrap” that comes with money while the Kooks are blissfully living their lives to the fullest. Kie is a Kook who hangs with the Pogues and she is often being told to stay away from them, being convinced that they are just parasites who feed off of others. This part of the series was well established and allowed the viewer to understand why some people act the way they do.

“Netflix already has some really good line of shows but what captivated me about Outer Banks is that it brought a new twist to the lives of teen surfers and treasure hunting. The series main characters are well rounded and allow the viewer to see there is more beyond the surface. The anxiety and suspense are through the roof throughout the episodes. This show all in all is a 10 out of 10,” sophomore Romulo Delgado said.

The storyline and script were incredible in this series. Usually in some shows, the characters dialogue feels natural and authentic. In the series, there were key moments where the characters have conversations like regular teenagers do. Scenes where during a conversation, they would talk over someone else or when one would scare another and instantly laugh. It gave the series an advantage because the audience feels like it is actually real. The storyline had many shock factors and also explored the individual lives of each character allowing them to be more well-rounded. The hunting of the lost shipwreck money and the obstacles they had to face had every viewer on the edge of their seats.

There are subtle hints dropped throughout the episodes that the audience can catch on to and try to figure out what could happen next. There is not one episode in the series where there is not some sort of action or suspense. There are also topics being touched on like drug addiction, murder and child abuse that separate the show from others. There is no sugar coating when it is displayed on the screen.

“It was very captivating to watch because there was not a single dull moment in the series. It was only ten episodes but it did an amazing job taking a sort of cliché story and putting a modern twist on it. I also really connected with some of the characters and I definitely would recommend for others to watch,” sophomore Arianna Garcia said.

The camera work on the show is noteworthy, whether it was a scene where they were surfing, diving or just sitting in their boats, it was filmed beautifully. Each shot taken was worth the time spent on it, especially the ones where the gang was surfing. Every trick and move is shown and it is incredibly pleasing to watch. The diving scenes were also done impeccably. Underwater cameras were able to catch exactly what they are doing despite how hard it could’ve been to film and the use of shadows showing the boats above was a nice touch that made it seem even more real. The utilization of natural lighting allowed them to capture beautiful shots, for example, there is a scene of the gang sitting on a hammock where it is all done with the shadows of their bodies.

In the back, the screen displayed the beautiful night sky and the stars while the characters are all black but the viewers can still tell who’s who. The directors and producers took their time making the series what it is and their hard work definitely shows.

Overall, Outer Banks is one of the best shows on Netflix right now and it has people all over social media obsessed with the characters. The finale episode left people with many questions and has allowed a window for season two to be a possibility. Although there has currently been no announcement on season two, it is almost certain that there will be one. The success this show has received is incredible, it is currently on Netflix’s top 10 in the United States. Audiences can not wait for more and are excited about where our favorite Pogues will take us next.