The Magical Outlook on Locke and Key 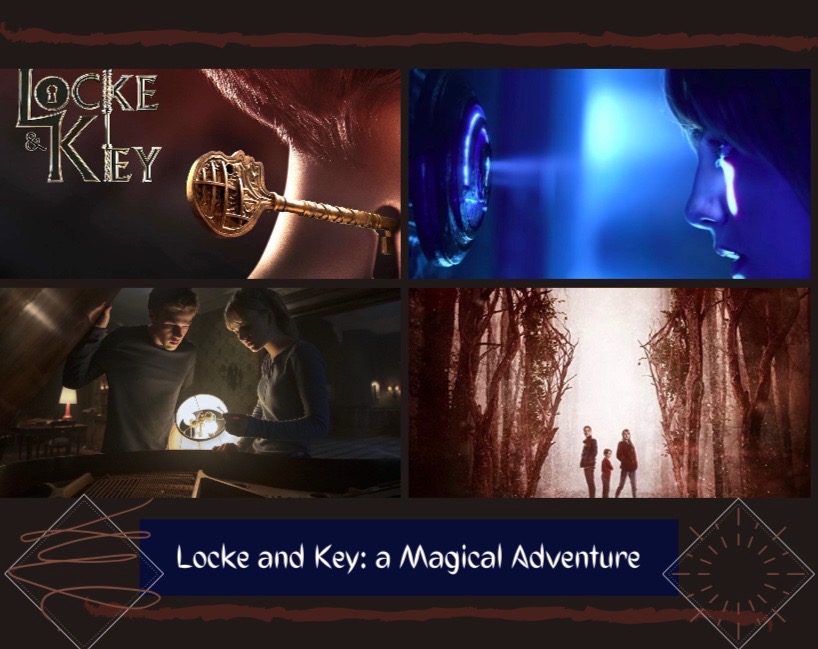 Bode, Tyler and Kinsey Locke discovering the keys that will change their lives forever.

Locke and Key is a new Netflix series that follows the lives of three siblings named Tyler, Kinsey and Bode whose dad, Rendell, was brutally murdered by his former student, Sam Lesser. In their mother’s attempt to find more answers, she makes them move into their father’s house, a Keyhouse in Matheson, Massachusetts. The kids soon discover that the house is filled with magical keys that manipulate the laws of reality. Unfortunately, the kids are not the only ones who know about the keys and those in search of them will go to extreme lengths to get them.

“I loved the concept of the show, it was very interesting to see how the directors took this storyline and made it what it is. The Locke family decided to dig deeper into their late father’s past, which ended up becoming a very complicated mystery. I absolutely can not wait for the second season,” sophomore Alana Fernandez said.

The directors and producers of this series really captured the essence of the story. From the very beginning to the end, the viewer sees exactly everything they go through. These three siblings go through everyone’s worst nightmare when their dad is killed. With such an emotional challenge upon them, they are also forced to move into a completely different town and start from zero. Their mom was doing it to allow them to feel closer to their father as well as get some answers on his death.

Upon their arrival, they discover keys that have the ability to do the impossible. There are several keys throughout the series such as the anywhere key allowing you to go anywhere in the world as long as it has a door, the echo key that allows you to bring a dead person back to life and the head key that allows the user to open a door into their minds which allows access to their memories, emotions and knowledge. These three examples are a few of many and the directors really brought this concept to life.

“The show was very mysterious and intense which made me excited about what was coming next. The series did a good job of showing all of the character’s points of view on what was going on at the moment. As a viewer, you get to see how each event affected them and how it all tied together at the end,” sophomore Camilo Gil said.

The camera work, as well as the way they decided to present the storyline on screen was incredible. The scenery and the CGI in the series allowed the viewer feel like all the magic occurring was actually possible. The audience was introduced to key parts of the story without knowing. There was this whole mystery that was slowly being uncovered and allowed the viewer to believe the confusion of the character. At first, they were confused on how the keys worked and slowly get small pieces of information to piece together.

In the span of 10 episodes the viewer goes through a rollercoaster of emotions and mind-blowing information. The audience was allowed the chance to figure out what was happening along with the characters. Whether it was if the kids were confused as to what the black door was, their uncle’s lack of childhood memories or Ellie and her story, the viewer could be so sure they knew what was happening until the next piece of information was revealed. The editing was cleverly put together and was consistent all the way through the end which is a major factor in why the series was so popular.

The most shocking moment throughout the whole show is the ending. The cliffhanger the show leaves off on makes the audience want more. As a viewer, it leaves you in a shock where you stop and think of everything you just watched and reevaluate. Locke and Key is already renewed for a second season and audiences are eager to see where the keys are going to take us next.