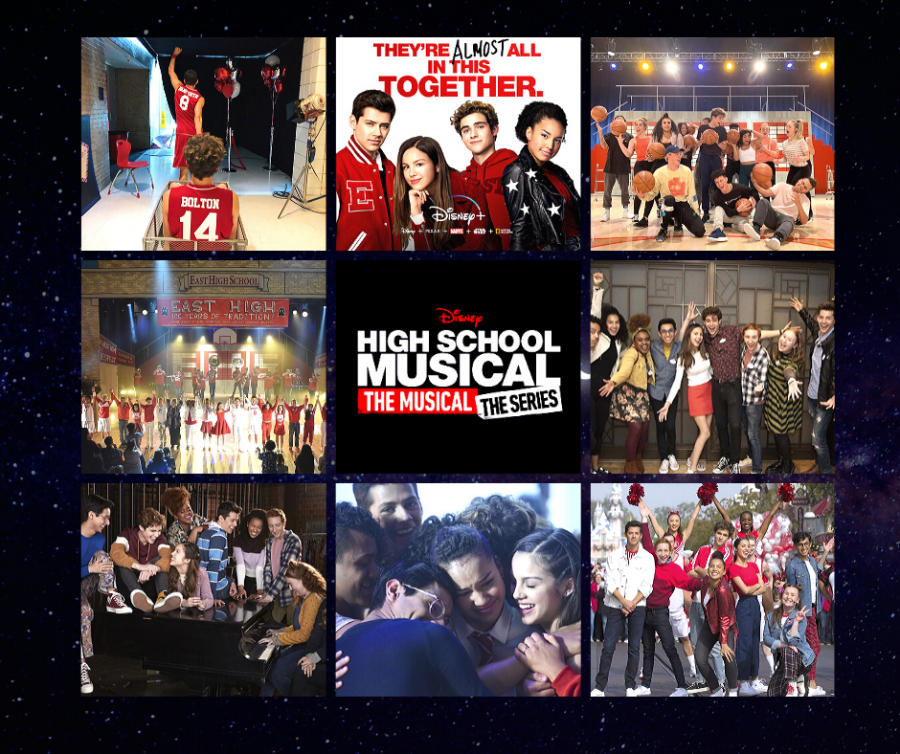 High School Musical: The Musical The Series cast in posters and behind the scene pictures

“High School Musical: The Musical: The Series” is a television series that airs exclusively on Disney+. The series is inspired by the iconic trilogy “High School Musical”. The show is set at East High School, the school Troy, Gabriella and their friends attended in the movies. The show begins when the recently employed drama teacher, Miss Jen, discovers that the school where the original film was shot had never had a performance of the movie. A group of theatre kids audition for the musical and embark on the turbulent roller coaster that is producing a high school play. They are exposed to romance, the meaning of friendship, the idea that they can attain anything they put their minds to as well as discovering who they truly are.

The series is very clear displaying its independence from the films and wants to add on to the trilogy rather than continue the story of Troy and Gabriella. Each character from the show has aspects from at least one of the original characters, but all of them have their own unique personalities. The writing is decent for a Disney show, but some parts were cringey and bland. The drama between characters is very basic, the traditional love triangle between Nini, Ricky and Ej as well as the rivalry in the beginning over the role of Gabriella between Nini and Gina are all played out clichés. There are also certain wardrobe choices that were questionable, but still did a good job of establishing the differences between the characters.

“I feel like the show brought some of the elements of the movies and the same adolescent emotions the film had, but I feel it does not do the movie justice. Although the show is a Disney series, the majority of the viewing demographics are aged 11 through 16+ old fans,” sophomore Romulo Delgado Gonzalez said.

That being said, the writing did have high points throughout the show’s 10 episodes. It tackled things certain teenagers go through with accuracy, such as Gina and Ricky’s home situation and how confusing things are when it comes to emotions or feelings towards someone. Each character handles what is thrown at them differently. The writers were also inclusive of the LGTBQ+ community without making it overwhelming or heavy handed, including Nini’s lesbian moms and Carlos and Seb’s relationship. They were not one dimensional at all, in fact, most of the characters had an arc or character development which showed that they are complex people, like anyone else.

The camera work of the show was not the same as any other television program. It was styled as a documentary that had a distinctive resemblance to the series “The Office” and because of that, it allowed the viewer to feel like they were actually there with the characters rather than watching it. It gave the series a personal feel to it. Most of the actors on the show are actually teenagers, the oldest being 23, Frankie A. Rodriguez, and the youngest being 16, Sofia Wylie, who was actually 15

throughout filming. The chemistry between the characters, whether it was based on romance, friendship or family, was remarkable.

“The show was directed by a former theatre kid who aimed to reach the attention of other theatre kids which was refreshing to see. Some of the writing was not the best but let’s be real, how much could we expect from a teen Disney show. I enjoyed the goofy aspect of the show, particularly with the 4th wall breaks. Everyone is also in love with Joshua Basset but who can blame them,” freshman Sarah Whalen said.

For the majority of the fans watching the show, the film “Highschool Musical” shaped their childhood and they were blown away when “Highschool Musical: The Musical: The Series” was released. The series will never compare to the original movies and its instant popularity, however, it still does a fantastic job in honoring the legacy of these films. “High School Musical: The Musical: The Series” was renewed for a season two even before it aired on Disney+, which is a token to how much faith Disney put into this show. Everyone who has watched the series is dying to see what is in store for these fantastic characters.