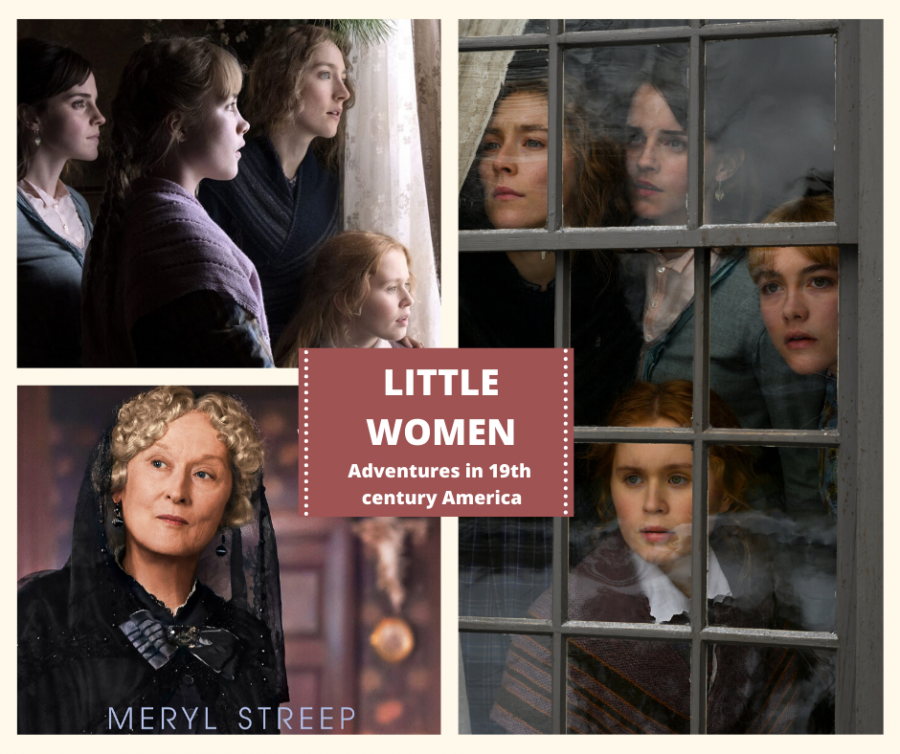 The March sisters, Jo, Beth, Amy, and Meg looking out a window, alongside their Aunt played by Meryl Streep in one of the most iconic poses of the previous adaptations .

“Little Women” is an inspiring film about four sisters trying to figure out their lives after the American Civil War. The film opens with Jo March, an aspiring writer who resides in New York, looking for an outlet where she can make money to help her family. Her sister, Amy, is studying art in Paris and finding a suitor for the future with her Aunt. Theodore or “Laurie” is the March sister’s childhood friend who accidentally encounters Amy streets of Paris. The oldest sister, Meg, is the most traditional sister who is married to John Brooke: a school teacher and Laurie’s old tutor. Their world is suddenly rocked when they hear their quiet sister,Beth, has fallen ill and they all go rushing home, uniting the family.

“This adaptation of Little Women was great. It did not stray from the novel much, but the director added some touches that made small changes unique and acceptable. One of the best things about the film was the music score from Alexandre Desplat that really makes cinematography more beautiful than it already is. The acting complimented the screenplay and gave the characters more depth along with strengthening their relationships with one another,” senior Zoe Valle said.

This film was the adaptation of the book “Little Women” by Louisa May Alcott which was released in two volumes, one in 1868 and the other in 1869. The book has had multiple movie adaptations made, but Greta Gerwig’s take on this classic has blown people away and made audiences fall in love with these characters again. The film has been nominated for multiple awards, such as Critics’ Choice and The Golden Globes.

Gerwig, along with the writers, do a phenomenal job in tackling the classic piece by maintaining its 19th-century origin and, yet, relating it to modern society, capturing the essence of what it is like to be a 19th-century woman and the struggles that come with it. The importance of morals, love, family and what matters in life are all topics the film touches on in great detail. Today, many people struggle with the idea of who they want to be and how to get there and, likewise, throughout the film, the March sisters are discovering what they want to do with their lives and the complications that are thrown at them.

“This coming of age story was really moving and inspiring. The acting was impeccable and the screenplay was amazing. In particular, Saoirse Ronan did an incredible job as Jo and created a very relatable character. The difference between the past and present was made very clear by the cinematography which was fascinating because it was shown simply by warm and cool tones. I loved the film,” sophomore Arianna Garcia said.

The acting in this film was extraordinary. Saoirse Ronan took on Jo March’s character and truly embodied her perfectly, doing a fantastic job of demonstrating Jo’s interests and desires. She is not the typical girl who dreams about marriage and thinks that love is the only way she can excel in life, but rather a strong character who still sees a future beyond a man: a radical idea at the time. Florence Pugh demonstrated the pressure on a woman to find the perfect suitor. The sisters’ biggest obstacle is poverty and how each of them rises out of it. Meg and her mother, Marmee, demonstrate the struggle with choosing love over money. Beth is the light of the movie, whose biggest desire is to play the piano for her family. Scanlen’s performance is outstanding; she is the sister that all the other sisters envy. Beth’s illness is by far the saddest part of the film and it emphasizes the importance of love and family, where every minute together counts.

The way the film was structured is additionally noteworthy. The switches between present and past to tell this impactful story were unique and refreshing; the seven-year time jump makes the viewer wonder what was going to happen next. The storytelling, along with the movie’s cinematography was remarkable, with beautiful landscapes and parallel’s being orchestrated throughout the film. Certain ones aimed to pull the viewer’s heartstrings, with moments where the camera angles made the film look raw and realistic, truly transporting the audience elsewhere in displaying the hardest times, as well as the happiest ones, in life.