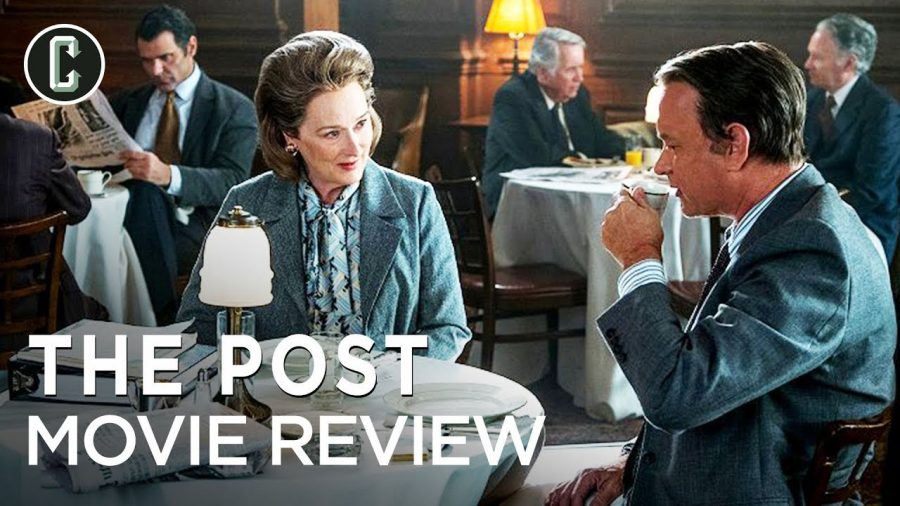 While some millennials spend their days posting tweets as their grandmothers post minion memes on Facebook, some people actually make a living by posting information online for the public. Even though you may not visit them regularly (except when creating a bibliography with plentiful sources), sites that report the news are critical to online users. They serve the purpose of letting the people know of events in their communities, and they even remind the daily user of their basic right to freedom of expression. Sites like The New York Times, The Washington Post and CNN are all meant to educate the public and wipe out ignorance one reader at a time. Recently, The Washington Post has had a place in the spotlight because of the release of its own movie.

“The Post” was released in theaters a little less than a month ago. The screen transitions from black to a colorful, yet gloomy, background filled with soldiers dressed in their camo outfits, painting their faces so that they blend with the surrounding jungle. The image flashes “1966” and sets the scene in Vietnam. While the scene is only a few minutes long, it introduces a man who is later revealed to be Daniel Ellsberg, a State Department Military Analyst. It is not said how long he was in Vietnam, but we can safely assume it was a moderately short period of time since he seems to be writing a brief report on the status of the Vietnam war. It shows beautiful cinematography and a compilation of shots almost representing a montage. The audience then sees him on an airplane on his way to Washington D.C. with the (at the time) current Secretary of Defense, Robert McNamara, who was writing a census for government personnel. Ellsberg overhears McNamara complaining that the war’s efforts are useless and that a victory would most undoubtedly never be seen, and he agrees with McNamara. However, once the plane lands, reporters bombard McNamara with questions on the war. Instead of voicing his true opinion, McNamara lies to the press by saying things have never been better in Vietnam. Hearing McNamara’s false statements, Ellsberg takes it upon himself to expose the truth, leaking extremely sensitive material on how the government had been lying to the public for years just to avoid the embarrassment of admitting defeat! Though this occurs in only the first ten minutes of the movie, this little segment sets the stage for the rest of the plot; otherwise there would not have been any conflict to move the story forward. This might be the only reason to call the plot convoluted; other than this, it is simplistic and interesting  to follow.

Once the most important yet subtle detail is over, the rest of the movie continues. Based on true events, “The Post” follows Katharine Graham, who sold stocks in her company, The Washington Post. At the time, it was only a small local newspaper and reporting channel. The movie focuses on her and delves into her conflicts and struggles. The Washington Post was a family business, passing on from father to son, and so forth. When she got married, her father gave control of the company to her husband, who was not only a renowned intellectual, but also had amazing connections with John F. Kennedy and other government officials, like the same Robert McNamara from earlier in the film. Everything seemed perfect: she was surrounded by the rich and famous, she had a loving husband and she was the mother of her own growing family. Then, her husband died. The filmmakers pay a lot of attention to her story line and focus on developing her character; the audience seems to grow along with her. Her character and the other characters are very relatable to the viewer: they all have goals, families, aspirations and ideas that they want to set in motion. One detail that is frequently referred to is the death of Graham’s husband; his death leaves her to run the company, something she had never had to do before. Because she is a woman relatively new to the field of business management, this leads to stockholders doubting her every decision, which adds more stress to her already tumultuous life. Even though the real Katherine Graham died in 2001, it is like the viewers see an identical embodiment of her spirit and personality on the screen.

After all the background information is set, the “heart” of the plot begins to unfold. Ellsberg’s copies of the top-secret documents, which described in great detail 20 years of U.S. activities in Vietnam, were ‘secretly’ leaked to the New York Times, so the massive newspaper could publish them as a report. Meanwhile, the Washington Post’s editor-in-chief, Ben Bradlee, notices from his usual checks on the other newspapers that the main writer for the Times, Neil Sheehan, hadn’t published an article in a while. This meant that the Times was planning on publishing something big: the leaked documents from Ellsberg. Because of our background knowledge from the beginning, the viewers have an advantage in deciphering this part of the plot, which also settles in nicely as the movie progresses.

When the article from The New York Times is released, Graham starts to feel conflicted and pressured from both her work and social lives. She notices the article does not flatter her friend McNamara, painting him as a liar. On the other hand, Bradlee learns The Post may have had access to the same secret documents The Times had, which would allow them to expand their coverage on the topic. This becomes a conflict for Graham who has to decide if they should cover the story, knowing that it might completely smear her friend’s reputation. However, Graham chooses to put her friendship aside and report the truth to the public. Some might nitpick about how the movie has a slower pace than other real-life stories, but the plot in “The Post” actually moves at a nice pace. With so many things happening with characters, it is nice to sit down and not have to be overly invested in characters’ motivations for a change. The story tells itself, instead of the viewer having to grab a pen and paper just to know what’s happening throughout the movie.

The movie really starts rolling when the documents are delivered to Bradlee’s house where some of the other reporters had shown up. The scene almost feels like watching children opening their Christmas presents, stunned by all of the information on each page. Pages are spread across the floor; smoke from cigars fills the air; Bradlee runs from person to person, reviewing notes and finding the documents with the most useful information- it was a scene of chaotic splendor. While the reporters look for information, Bradlee calls his lawyers, who warn them that what they are doing is a violation of an order from the Nixon administration and they could end up in prison or be charged with national treason. Despite the threat, the reporters all ignore the lawyers and keep working. Meanwhile, Graham is faced with the decision to print or not to print. The reporters are already done with the article, and all they needed was Graham’s approval. The dilemma was that Graham could either destroy the newspaper and the family legacy or establish The Washington Post as a legitimate journalistic institution. After much consideration, she decides to publish. It is difficult to describe the scene, as conflicting feelings are all mushed together not only affecting the plot of the story, but also the people watching. The rising tensions because of a simple decision leaves the viewer excited and anxious, grasping the seat to see what happens next.

Soon after she decides to print the article, everyone is talking about The Washington Post, which makes sense, since their audacity to report such incriminating documents not only led to the prosecution of the writers, but also a Supreme Court case. The Supreme Court ruled 6-3 in favor of the Washington Post and guaranteed the freedom of the press: it is a happy ending for the main cast. Spielberg also cheekily gives a nod to the Nixon Watergate scandal in the last minute of the movie. By the end of this movie, the audience will be torn between whether or not they should clap or cheer. And for those who understood the ending, it can only be said that its subtle cleverness cannot go unnoticed.

“Yeah of course: I guess the impression that I got from the movie was that it was very informative, but it was also very exciting. I definitely appreciated Meryl Streep and Tom Hanks’s performance; it was very real, and I appreciated it. The movie also had a lot of comedic undertones to it, and I also like the ending to it and how they close off the movie with the Watergate scenario. I also like the build-up to Meryl Streep’s character. I absolutely love the moment when the reporter gets the transcript and how, even though he has paved the way for the rest of…the movie, his character is comically overlooked. I would like to think that it gives me an accurate description of how hectic things at newspapers can be. It also made me find an unexpected appreciation for The Washington Post. I actually think that the movie somewhat inspired me or reminded me of how much I love journalism and I want to keep doing it. The stress and hard decision making was actually the best part of the movie and added suspense but also…a realistic appeal to it, which fleshed out the characters,” freshman Samantha Correa said.

Whether you are looking for a good time, an emotional journey or a simple inspiration, look no further than “The Post” to find an amazing movie to watch. It has compelling characters, and an interesting story all captured from real life. And at the very least, it is not like “The Founder,” which seemed like a two-hour long commercial for an unhealthy diet. The movie itself is filled with a mix of stressful, but also delightful, emotions- you’ll be cheering for the characters at the end, almost feeling like you lived the same hardships they have. The plot is not convoluted, yet intricate enough so that the viewer does not lose interest. On the contrary, the movie is addictive- once you start it you won’t be able to get enough. So if you are interested in a compelling story about how a group of people exercised their first amendment right to inform the public, we must recommend “The Post.”