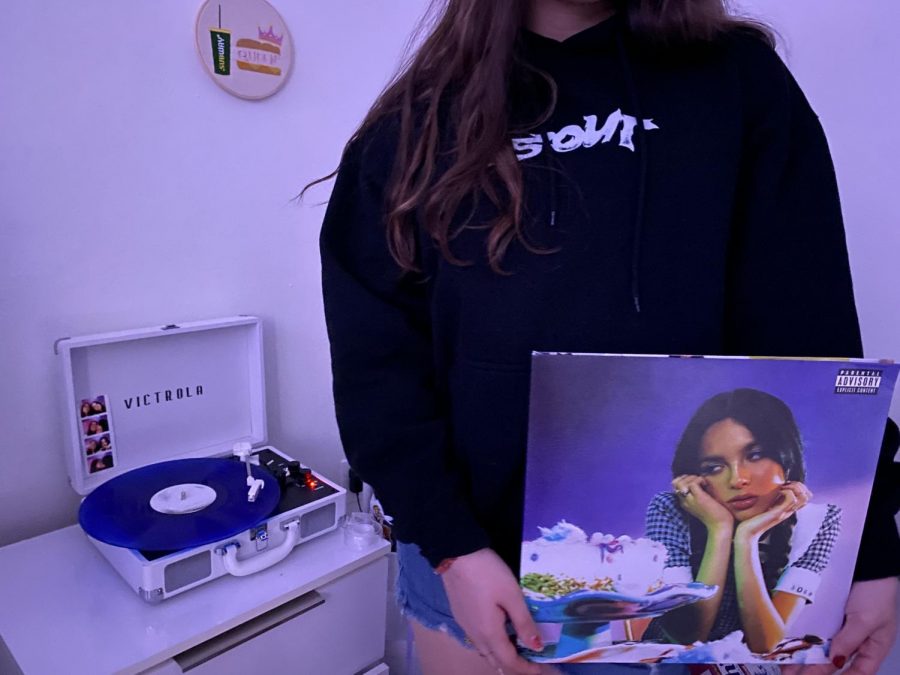 Sophomore Lorena Acevedo sporting the merch of Olivia Rodrigo, one of this year's most popular singer-songwriters.

As another year comes to a close, we can look back at what has been keeping everyone occupied while trying to reenter a normal reality. A year for rediscovery, the trends in all aspects of life mirror that.

With the new year came loads of entertainment to stream throughout multiple platforms. Multiple hit shows came out with new seasons such as “Outer Banks” with its season two premiering in late July and “You” just recently coming out with its third season on Oct. 15. As for movies, 2021 has provided a wide range, from chilling horror movies revamps like “The Conjuring: The Devil Made Me Do It”, “CandyMan” and “Halloween Kills” to superhero action movies like “The Suicide Squad” and the much anticipated “Black Widow”. This wide range of cinema received large amounts of praise, trending highly on social media throughout the year.

“Watching Black Widow was by far the highlight of my year,“ sophomore Monserrat Delacerda said.

Music is an essential in many people’s lives, especially throughout the past two years with people often being stuck at home with nothing to do. New artists have risen to fame at a rapid pace, one of those being former Disney channel star Olivia Rodrigo with chart-topping album “Sour.” Rodrigo hit stardom with the release of “Driver’s License”, her debut single. The speculation and drama surrounding what the songs meant and who they were targeted at are mostly why they became so popular. Rodrigo ruled the charts with her album in late May and early July. It has been hard to miss any of her songs on the radio and this year has skyrocketed her career, making “Olivia Rodrigo” a household name.

Just like the ever-changing nature of music, fashion trends are constantly evolving. Things go in and out of style rapidly and it is difficult to keep up with them all at times. However, the most prevalent inspiration this year has been taken from the early 2000s. This began late last year when the “Y2K” style came back in full force with low rise jeans, claw clips, big sunglasses, cami tops and chunky shoes.

As the year progressed, different segments of this style remained, with more inspiration from the 70s and 90s by including colorful patterns, flared pants, loose denim and mini bags. For the most part, style this year has become something that you can’t necessarily put in one category. This is for the most part due to microtrends, which is when people make items like leg warmers or sweater vests “fashionable” and drop them just as quickly as they began. This is not only horrible for the environment as it feeds into the fast fashion industry but for everyone’s wallets as well.

Since Tik Tok has become a larger platform, there has been a shift in how media presents itself. People on platforms like Instagram have begun making their posts more casual and authentic for audiences by curating candid pictures that aren’t posed or forced, often hashtagged “#makeinstagramcasualagain”. Another popular trend that feeds into this lax phenomenon is the creation of “photo dumps”, which are collections of pictures from your camera roll that are typically different from one another, in the hopes of clearing your camera roll. Each of these trends is in circulation to break the toxic tendency of creating a seemingly perfect life on social media.

2021 has certainly been a recovery year for everyone and these trends have really made it what it is. Hopefully, 2022 will provide necessary shifts to make the culture healthier and easier to maintain.